In France, A Memorial To Remember All Who Served NATO 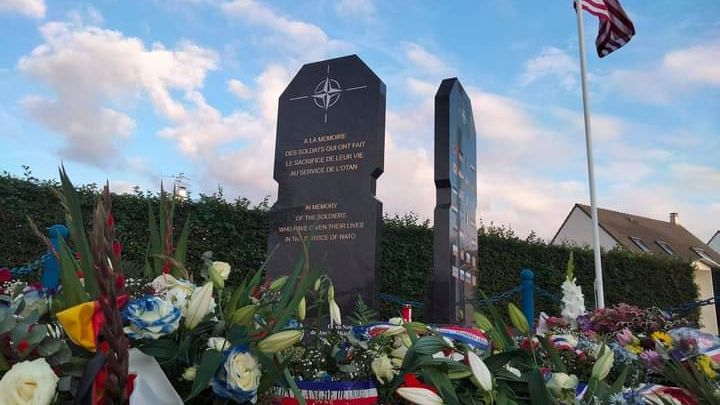 A tribute to NATO member states and the service of their soldiers. (Courtesy of the NATO Memorial Foundation)

LONDON — A modest memorial in the sleepy French town of Frethun is a rare public reminder of the transatlantic alliance of NATO and those who have served its cause.

The unveiling of the ceremony for the memorial in 2012 was attended by NATO officers and their representatives. Each year an interfaith ceremony marks the sacrifices of the those who died and served in NATO missions. The event is usually held on or near September 11th.

Willy Breton, a former gendarmerie, is the president of the memorial foundation. Breton served under NATO command in both the Western Balkans and in Afghanistan. Yet, it was an incident in his later life that inspired him to start the memorial. The wider war in Afghanistan was an important turning point for NATO. When the United States invoked Article 5 of the Atlantic Charter in calling in response to 9/11 it was the first time a NATO member state had invoked the common defense agreement.

“During my tour an IED resulted in the death of Corporal Janzen Luc and Captain Barek-Delingy Christophe,” In his capabilities he over saw the transfer of their bodies to an airbase for transport home and was haunted by the honor guard the corpses of the two soldiers received from their fellow NATO soldiers and their allies.

“NATO soldiers of different nationalities and Afghan soldiers accompanied the convoy &mldr;[made] a guard of honor holding a lighter or lamp a loft as we passed. I was in the vehicle leading the way and I can tell you that it was a personally very moving experience. These two soldiers were brought together by death, blood and a call to service.”

His service done, Breton realized that despite the many countries involved in NATO, there was no public NATO memorial anywhere in the now 30 member countries.  He wanted a way to honor the memory of the soldiers who died in operations under NATO mandate, and to ensure remembrance among new generations of NATO’s mission.

Breton considered several cities for a memorial and eventually chose the French village of Fréthun. Breton notes it was chosen for a number of reasons: The nearby city of Calais has long been an important transportation hub, and nearby links to the Paris-London high-speed railway ensure the memorial is reachable from a variety of airports. The support of the then-mayor was also crucial.

“Madame Catherine Fournier made land available very quickly and free of charge for the committee which allowed the NATO Memorial to be born. The monument after it was built transferred to the town hall of Frethun. The committee was dissolved, and the Federation of the Nato Memorial was officially created.” Catherine Fournier later became a French senator but continued to be engaged in the monument. She died while still in office on December 7, 2021.

This modest memorial consists of two standing slabs that note the service and NATO member states. To some observers the modest monuments invoke the Twin Towers destroyed by Al-Qaeda terrorists on September 11, 2001 which led to what would become the longest conflict for many NATO member states – including the United States.

Public recognitions of NATO are rare. One of the largest, an eternal flame monument in Belgrade, is actually meant to criticize the alliance by marking the military and civilian casualties from the NATO bombing of Yugoslavia in 1999.

Each year the site hosts a memorial service that brings together representatives of eight different religious traditions including Catholics, Muslims, Hindus, Anglicans, Jewish, Protestants, and Orthodox on the anniversary of 9/11. Last year’s  ceremony saw the unveiling of a stel, a vertical stone or wooden monument, for Belgian and Czech soldiers and another for military service animals. The occasion of the 20th anniversary of 9/11 also occasioned a response.

“It is important to me and other service members, it was really close to my heart and I did everything so that this memorial could be erected. Currently, I have personally spent around 80,000 euros.” The initial memorial alone he says costs 25,000 euros for its construction and associated fees. The NATO Memorial Foundation has partnered on commemorative editions of everything from knives to sweets in order to keep the memory alive.

The NATO Memorial Foundation has some 36,000 members who have joined the effort online. The figure includes a handful of high-profile figures including Sandor Lothringen, a Habsburg royal, and his wife. Other prominent members include former high-ranking military officers, a Hawaiian royal, and many members from non-NATO countries. Hollywood actor Mark Harmon has sent a letter of support to the memorial. Beyond just the memorial upkeep and events, the memorial funds sports events and also a division seeks to find funding for prosthesis for wounded NATO soldiers.

While Russia’s invasion of Ukraine has brought NATO’s geopolitical importance to the forefront, the memorial is built for the day when NATO is no longer making headlines.

“Projects such as this one play a vital role in keeping NATO and its values alive in our public memory,” said Manuel Dos Santos, President of the Young Atlantic Treaty Association (YATA) chapter in Portugal.