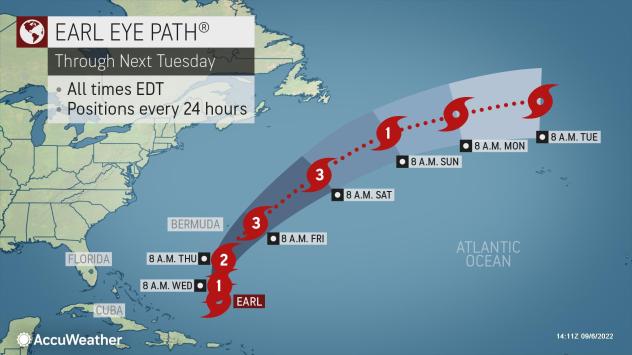 Tropical Storm Earl is likely to become the first major hurricane of the 2022 Atlantic hurricane season as it passes to the east of Bermuda, unleashing some impacts on the islands late this week. The Atlantic is heating up following a historic quiet period, and there are a slew of other tropical disturbances in the Atlantic that are being monitored for development, according to AccuWeather meteorologists.

Steering breezes have turned Earl to the north as anticipated by AccuWeather meteorologists since last week. The center of the system is likely to pass to the east of Bermuda Thursday night.

“There will be some impacts on the islands of Bermuda in the form of building seas, rough surf, gusty winds and some rain from Earl, but the potentially destructive winds and torrential rain are likely to pass to the east,” Rayno said. Gusts frequenting 40-60 mph (60 to 100 km/h) are likely with a StormMax™ of 70 mph (115 km/h).

A general 1-2 inches (25-50 mm) of rain is expected, with an AccuWeather Local StormMax™ of 5 inches (125 mm). Downpours can lead to localized flooding in poor drainage areas.

“Shipping interests along the path of Earl, as well as from Hurricane Danielle located 1,900 miles (3,060 km) to the northeast, will have to remain alert for rough seas,” said Adam Douty, senior meteorologist at AccuWeather. As of Tuesday morning, Danielle was packing maximum sustained winds of 75 mph (121 km/h).

“Danielle will slowly lose wind intensity and transition to a tropical rainstorm later this week and this weekend,” Douty said.

Shifting steering winds may offer multiple options for where Danielle could eventually track starting this weekend. There is the possibility of the system making a loop before taking a track near Ireland and the United Kingdom or perhaps a more southern route into western Europe. In the latter scenario, it could unleash beneficial rainfall.

There is another scenario in which Danielle could be absorbed by a non-tropical system that pushes eastward from Canada. In this case, Danielle could become unrecognizable prior to reaching Europe.

Elsewhere over the Atlantic, tropical disturbances, also known as tropical waves, will continue to track off the coast of Africa.

Less dry air and wind shear in the zone from Africa to the western Atlantic has allowed these waves to become progressively more robust in recent weeks. One such wave has a medium chance of becoming a tropical depression and storm from Thursday to Saturday. However, steering breezes during this time are likely to carry the system on a curved northward path. As a result, this system may never be a threat to land.

Additional tropical waves from Africa that follow are more likely to travel farther to the west and perhaps toward the Caribbean Sea around mid-September and possibly the United States later in September. Meteorologists say this is because a zone of high pressure is likely to strengthen to the north, and a clockwise flow of air will direct the systems more to the west, rather than to the north. At least one of these new waves has a chance to develop as soon as Saturday or Sunday.

The next named storm in the Atlantic will be called Fiona.

Meanwhile, near the southern coast of the U.S., a non-tropical storm system that is expected to drift southward over the Gulf of Mexico later this week will be of interest to AccuWeather meteorologists.

“This system will likely only have a brief window to develop into a tropical system late this week,” Douty said. “It will have to organize, become tropical and strengthen all in the span of a couple of days, which is probably not enough time, before moving back over the South-Central states this weekend.”

If that system is delayed in turning to the north, then it might have enough time to become an organized tropical system, but AccuWeather forecasters believe that is unlikely at this time.

The climatological peak of the hurricane season is just a few days away on Sept. 10 and despite the lack of tropical systems in August, the Atlantic has sprung to life.

The influence of wind shear and dry air that kept tropical development at bay across the Atlantic during August is expected to ease up somewhat through the remainder of hurricane season. The number of named storms for 2022 is likely to be near average with near to slightly below-average numbers of hurricanes and major hurricanes.

“Accumulated cyclone energy” takes into account the intensity and duration of all tropical storms and hurricanes as a tropical season progresses.

AccuWeather’s long-range forecast team predicts that one to three additional named tropical systems may unleash direct impacts on the U.S.