The centenarian's family lived on Prinzregentplatz in Munich–just doors away from the future Führer.
By Simona Kitanovska September 5, 2022
Facebook
Twitter
Linkedin
Email 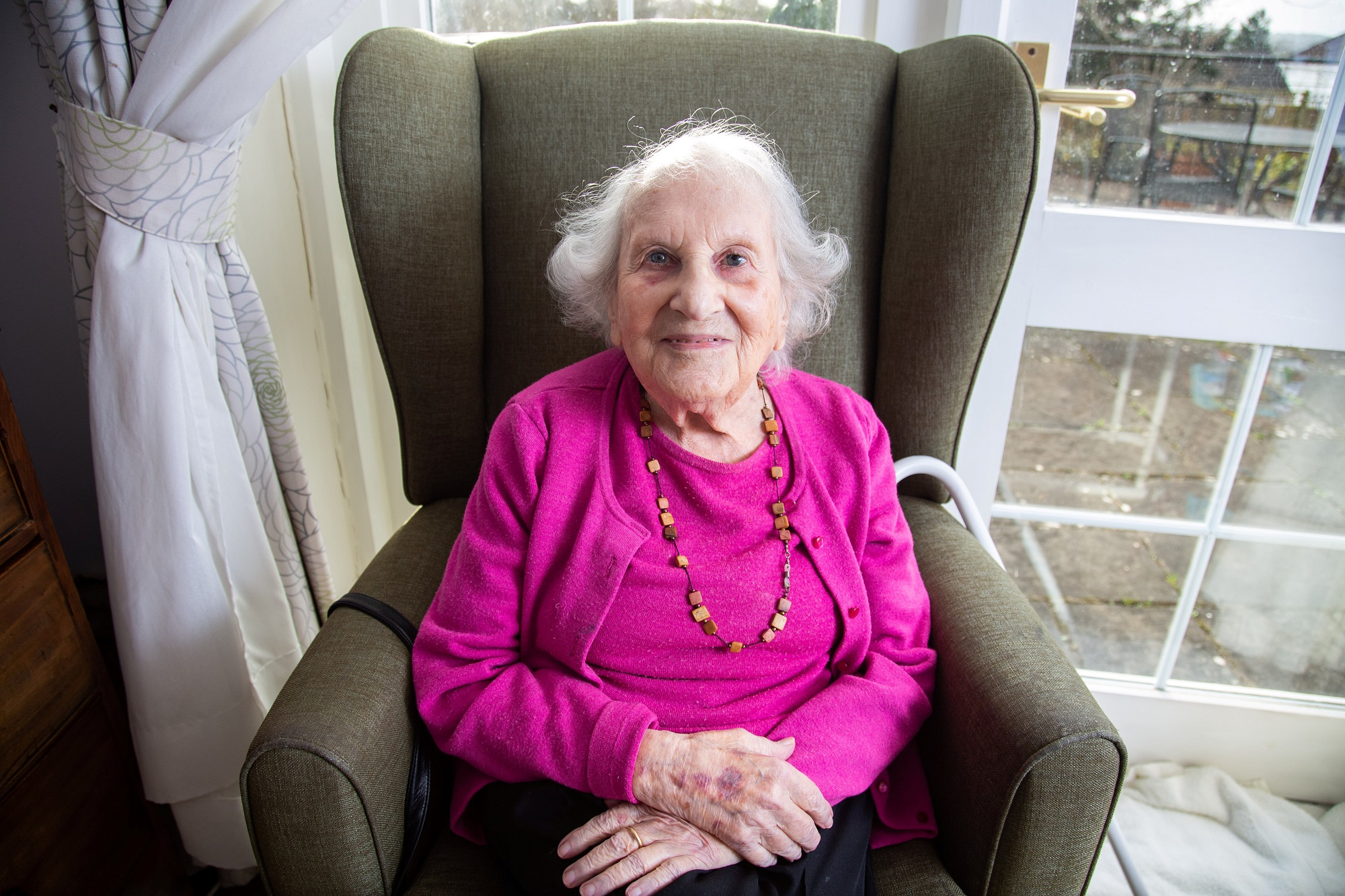 Alice Frank Stock at her care home in Bristol. Alice spent more than a decade living in the same apartment block as Adolf Hiter when she was young. Bristol. 11 February 2020. (Ton Wren, SWNS/Zenger)

Tributes have been paid to a Jewish woman–who lived next door to Hitler and even saw a coffin being taken from his apartment–following her death aged 103.

Alice Frank Stock fled the Nazi regime just before the outbreak of World War II and relocated to Britain where she lived for the remainder of her remarkable life. Before the move, she spent years living in the same apartment building as the evil dictator while growing up in Germany during the 1920s and 1930s.

The centenarian’s family lived on Prinzregentplatz in Munich–just doors away from the future Führer–where he resided until he became Chancellor in 1933. Hitler’s apartment was also the birthplace of the Nazi party.

In an interview shortly before her death, Frank Stock said she would sometimes see Hitler being rushed into the building while flanked by towering SS guards–most likely fearful of an assassination attempt. Rumors were also rife about Hitler’s nocturnal activities–including the mysterious fate of his niece Geli Raubal, with whom he was rumored to have been in a relationship.

Frank Stock recalled she once saw a coffin being carried out of Hitler’s apartment–which she and others speculated could have been the body of Geli, who is believed to have shot herself with Hitler’s gun after an argument. But she said Hitler was mostly unseen by her and her family, who were later forced to leave Germany shortly before the outbreak of World War II.

Her niece Judy Willmott has now paid tribute and revealed her aunt, who lived in Bristol, in the U.K., passed away in May this year.

Mrs. Willmott said: “With pressure on Jews in Germany increasing, Alice relocated to London in 1937 at the age of 19 and was subsequently naturalized.”

The family were even forced to sell a 200-year-old violin to stump up the £1,000 needed to enter England–which Frank Stock had managed to smuggle out of Germany.

Mrs. Willmott continued: “Fluent in English, in 1942 Alice secured a position in the ‘Y’ Unit of the BBC’s Monitoring Service which was set up to monitor German-controlled radio broadcasts. Alice’s job was to keep a log of broadcasts and translate where necessary, highlighting anything she considered may be of interest, which could immediately be flashed to London. Alice noted the music played, particularly listening for two songs, ‘J’attendrai’ and ‘Can You Hear My Secret Calling?’ because the titles of the songs played immediately afterwards could form part of a coded message.”

She added: “After over forty years together, Alice married Roy Macdonald Stock MC, ‘Mac’ in Paris. In retirement they met and collaborated with Henry-Louis de la Grange on his extensive biography of Gustav Mahler, visited many countries including Russia and China and spent happy summers walking in the Dolomites.

“Their final years were spent in Bristol, Mac’s home city. Mac died in 2011 but Alice continued to take a lively interest in everything around her, wrote a memoir of her eventful life and characteristically, developed several new friendships which brought her great comfort and pleasure.”

Whilst living at Druid Stoke Bupa Care Home, in Bristol, Frank Stock recalled her days living in the affluent area and her encounters with the notorious dictator.

She said: “We lived in a house–a big house–and there were two entrances. One was our apartment, number 14–the other was either number 13 or 15. That’s where Hitler lived.

“We heard many [rumors], from the cook and others. We saw a coffin being carried out of the entrance. I think a niece of Hitler’s was living there and then she died.

“There was speculation of how and when she died. I think there was truth in it that the coffin was carried out and in it was a woman. But there was no confirmation ever–and you couldn’t talk openly.”

Despite her close proximity to the Führer, Frank Stock said she rarely saw him–and never had any personal interactions.

She said: “I never spoke to him. Once I went to the opera–I got tickets through the school, it was in the royal box. I was very pleased. I got there in the evening and there were SS men saying: ‘You can’t come in here–go two boxes further down’.

“As the curtain went up I looked at the royal box–and there was Hitler sitting there. I saw him once or twice coming home too. His car would draw up. Two SS men would jump out, stand either side and he would rush up to the house–terrified obviously of someone who would try and kill him.”

Frank Stock also revealed that the fear of retribution was strong even during the early stage of Hitler’s career.

She said: “We had a wonderful cook who was elderly and very Catholic-and very anti-Hitler. Once she went out and saw a photo of Hitler hanging on the wall and she said: ‘Yes he should be hanged, the scoundrel–but not like this!’ I said: ‘You’ll get us all into a concentration camp’.”

The building in Munich still stands and has been occupied for various usages over the years.