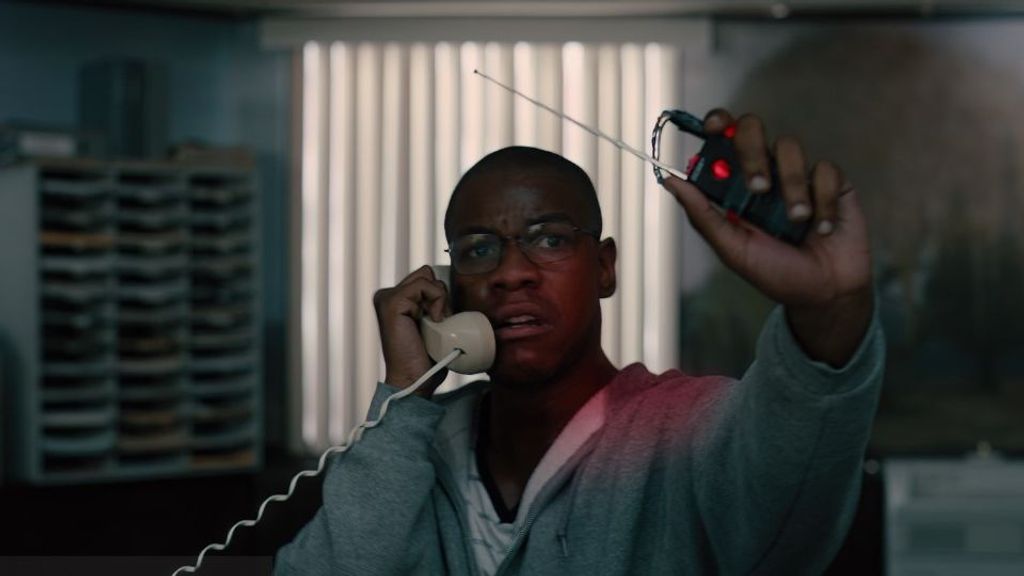 Desperate for his money from the Veterans Administration, and suffering from mental-health issues,  Brian Brown-Easley threatens to detonate a bomb during a bank robbery. (Bleecker Street)

A number of films have recently addressed the abuse and mismanagement military veterans endured at the Veterans Administration.

The 2017 film “Thank You For Your Service” highlighted a searing problem ignored by society and our government: 22 veterans commit suicide every day in the United States. The high suicide rate is attributed, in part, to the fact the nation isn’t looking after its returning vets. Many spend months on waiting lists just to get basic healthcare. Nor do they receive proper mental-health treatment once they return from war.

The filmmakers behind the 2022 movie “Breaking” are using the incompetence of the VA to tell the true story of a man who was gunned down in 2017 while robbing a bank after the VA denied him a $892 payment. The result was homelessness and starvation.

The Story: John Boyega stars as Lance Corporal Brian Brown-Easley, based on the real-life story of a former Marine Corps veteran in financial straits. Easley is denied his latest VA disability check on the grounds he owes them money. As a result, Easley, 33, is on the verge of losing his motel room and thus being thrown into the streets. Desperate, he walks into a Wells Fargo bank in Marietta, Georgia, and stages a holdup to secure his $892 — and is subsequently killed by police.

Easley made his way to the VA’s Regional Benefits Office in Atlanta, but couldn’t get a resolution to his issue. After contacting the VA’s Veterans Crisis Line, Easley was hung up on a few times. The VA dismissed his calls on the grounds of mental illness. The lack of communication from the VA, an experience all-too-common among the majority of U.S. vets, contributed to Easley’s death.

Bright Spots: The film is a near step-by-step reenactment of the 2018 Task & Purpose article “They Didn’t Have to Kill Him” by Aaron Gell. Easley is portrayed as a man who had no intention of robbing the bank and would have let the employees go if had detonated the bomb.

He just wanted the $892 owed to him by the VA. The recurring theme of the film is the plight of the wronged man. Easley wants his story to be told — and he wants the world to how indifference destroyed his life.

John Boyega gives one of the best performances of his career. “Breaking” allows Boyega to demonstrate his range of emotions as a former veteran who cares for his family, while battling mental illness.

There are a number of great veteran actors in this film, including Jeffrey Donovan and the late Michael Kenneth Williams, in one of the final performances of his career.

Weak Spots: The film positions Easley’s fate in a race-based narrative; his death was predestined because he was a black man, making the argument that he would have survived if he was white. This makes the police villains, taking focus away from the larger issue: his treatment by the VA.

There is also an issue with the film’s ending. The third act drags and ends abruptly, which is unsatisfying for audiences. The filmmakers forget to iron out the minor details that would have rounded out Easley’s story, making a better movie.

There is also a problem with the running time. Too much filler slows down the momentum. Connie Britton, who plays a reporter,  is a glaring example. Her role feels underdeveloped and thus, pointless. Her character is inserted only to stay true to events.

A stronger director would have handled the tension and the dramatic aspects of the story in a more compelling way.

The Takeaway: If the sole purpose of this movie is to tell the story of a man who wanted to be heard and wasn’t, “Breaking” passes that test. The problems vets encounter with the Department of Veterans Affairs have not improved — and it is crucial to speak for the powerless.

See or Skip: The word “powerful” is overused in today’s society, but this is a film that will leave a lasting impression on moviegoers. It will lead many to wonder why politicians praise veterans in public, but do little to ensure their lives are valued once they return home.