The  'Mad Max' director needs more magic in this tale of a lonely academic and a djinn ready to grant her three wishes.
By Jacob Smith September 5, 2022
Facebook
Twitter
Linkedin
Email 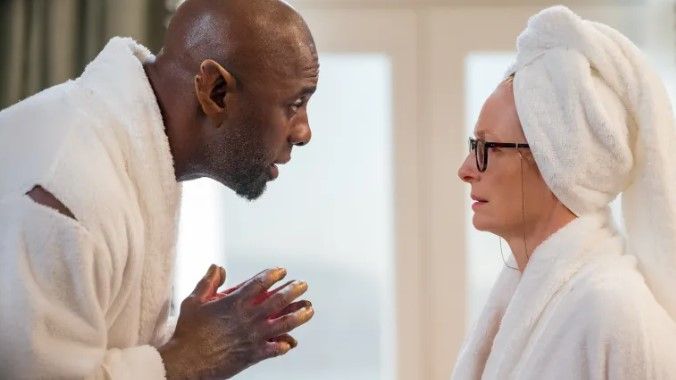 Idris Elba and Tilda Swindon star in a tale of a djinn (a genie) who offers an academic three wishes. (Elise Lockwood / Metro Goldwyn Mayer)

The film was a major comeback for the versatile Australian director responsible for “Mad Max,” “Happy Feet” and Babe,” as he had gone years without a hit.  However, Miller hasn’t directed a film since 2015 — until “Three Thousand Years of Longing.”

There was ample hype behind “Three Thousand Years of Longing,” given its strong cast, headlined by Tilda Swinton and Idris Elba. Inspired by English writer A.S. Byatt’s 1994 short story “The Djinn in the Nightingale’s Eye,” Miller, and his daughter, screenwriter Augusta Gore, poured their hearts into this passion project.

Despite that, the film is missing a stronger core.

The Story: “Three Thousand Years of Longing” is a film about a lonely British scholar named Alithea Binnie (Tilda Swinton). Alithea is a career-driven woman without a family or loved ones who has rejected a conventional life. During a trip to Istanbul, Alithea purchases an antique bottle, where she accidentally unleashes a djinn (Idris Elba), known to Americans as a genie, which was trapped inside.

The djinn offers to grant Alithea three wishes — provided they are her heart’s desire. But Alithea argues that wishing is a mistake and refuses to make any. After she accuses the djinn of being a trickster, he tells her three tales of how he became trapped in the bottle. The djinn is cursed and cannot break free without granting all three wishes.

Alithea listens to the djinn’s stories and has to decide if she should make her wishes or is something bigger at play.

Bright Spots: “Three Thousand Years of Longing” tries to say a lot of things about life and love. Miller uses the fable to illustrate the trials and tribulations of love. The film is broken into three origin stories about the djinn — and how he lost love on each occasion.

Both Swindon and Elba work in their roles. The set and costume design are stellar, but the magic effects, as well as some of the editing, needs to be sharper. We spend most of the film sympathizing with the djinn, rather than Alithea, as she, unlike him, has chosen her own path.

Weak Spots: The movie’s biggest problem is that its protagonist is the least interesting character in the film. Alithea, an older woman, claims to be happy alone, yet at an advanced age, she is lonely. She refuses to make any of her three wishes because she is closed off from the world; there is nothing her heart desires.

Finally, Alithea makes a bold decision: to give up on loneliness and wish that the djinn would love her. The problem: The characters exist on different planes and the shift in tone doesn’t work. That awkwardness may be attributable to the writing, which leaves the audience with an empty feeling. The film is a love story scripted to follow two characters from two different worlds, but we never sense the connection that would make their relationship believable.

The Takeaway: “Three Thousand Years of Longing” feels like a rough draft that needs tighter editing to resolve the holes in the story.

See or Skip: George Miller’s first big film in seven years has its moments, but is in need of a script doctor.