They all began talking over Skype and on the phone, finally getting to know each other after many years.
By Simona Kitanovska September 5, 2022
Facebook
Twitter
Linkedin
Email 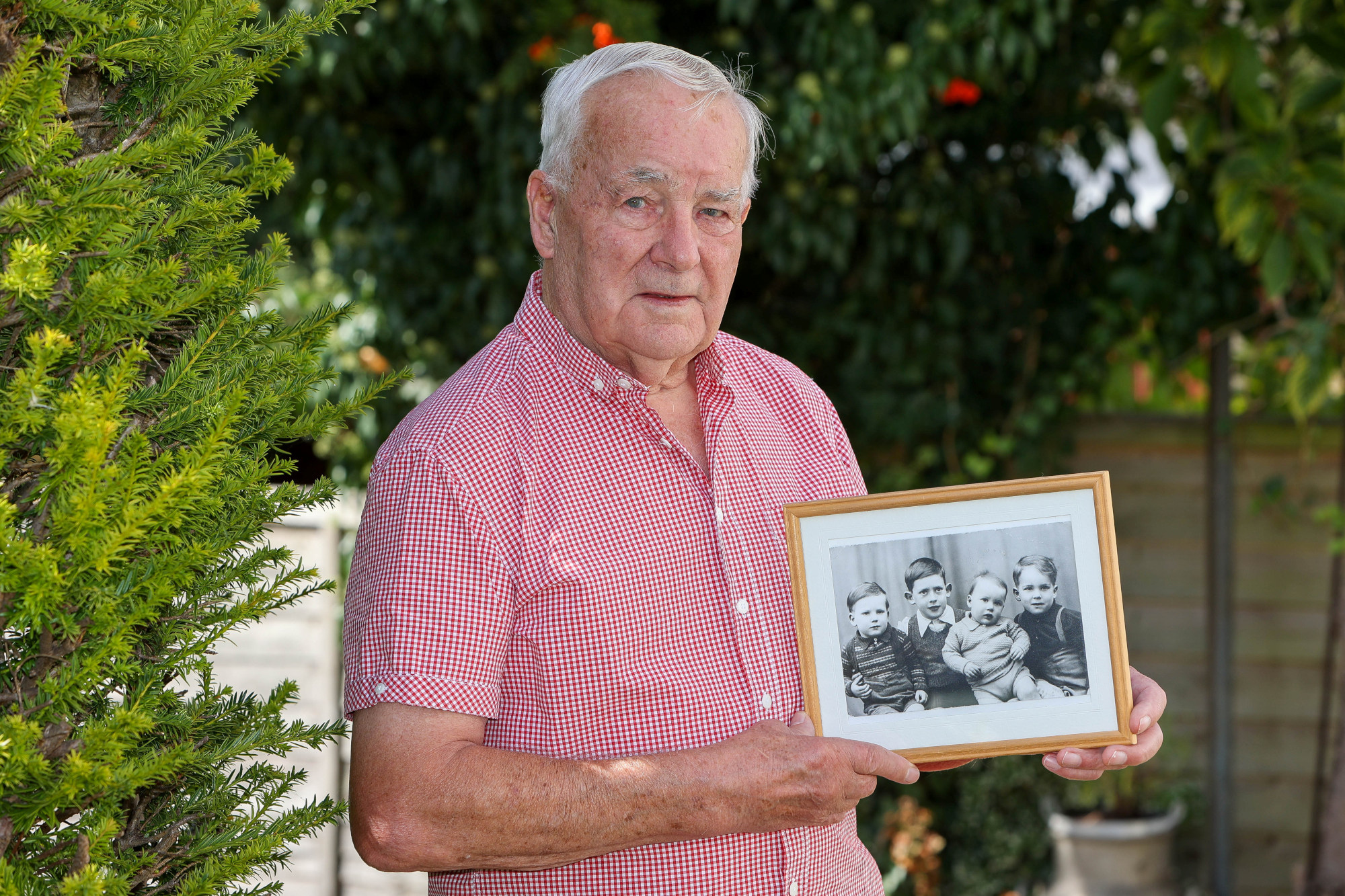 Ted Nobbs at home in Rugby, Warwickshire, in the U.K., holding a picture of him with his brothers as children (L-R) Barry (3), John (7), Geoff (1), and Ted Nobbs (5), in an undated photo. The long-lost brothers who were separated as children in 1945 are to be reunited for the first time after 77 years apart. (Anita Maric, SWNS/Zenger)

Two long-lost brothers who were separated as children in 1945 are to be reunited for the first time after 77 years apart.

Ted Nobbs, 83, and his brother Geoff, 79, have spent more than seven decades and 10,000 miles apart after their family was divided up at the end of World War II.

Ted, along with siblings Barry and John, were all separated from their youngest brother Geoff after their mom tragically died of cancer, aged just 30, in 1945. Their father wasn’t able to cope with caring for Geoff, who was just a one-year-old at the time, so he decided to offer him up for adoption to give him a chance at a better life.

Geoff moved to Australia in 1951, aged seven, with his adoptive family and has lived there ever since–going on to have eight kids and grandchildren of his own. Ted, Barry and John had all tried several times over the years to find their younger brother without any success.

But their luck changed in 2014, four years after eldest brother John passed away, when Geoff tracked down Barry and sent him a letter. They all began talking over Skype and on the phone, finally getting to know each other after many years.

Now Ted, from Rugby, Warwickshire, in the U.K., will meet Geoff for the first time since they were young boys in a heartwarming reunion this Sunday, on September 4. The retired factory worker said: “When Geoff first contacted us it was obviously quite emotional after all these years.

“It absolutely crunched me when he found us, I just didn’t think it would happen. There were a few tears shed. A letter from Geoff just landed on Barry’s doorstep out of the blue. We were all reunited on a phone call and it was just wonderful catching up.”

“We’d looked for Geoff too but without any joy,” Ted added.

He said: “I did a few searches, I put out letters. I did the first note in 1994 and then again in 2004. We went through Norcap–Supporting Adults Affected By Adoption, but again there was no luck and Barry also tried to find him separately.

“But when he found us another 10 years on, he planned to come over to England for my 80th birthday but red tape at his end scuppered those plans as COVID kicked in. This was all being done cloak and dagger behind my back. My wife and son Christopher decided to try and get Geoff over here. I knew nothing at all about it.

“We had the celebrations anyway and there was a big TV in the hotel and Christopher had got a video off Geoff that he played. He wished me happy birthday. After that, I said ‘right I’ll go and see him then’. I fly out this weekend. I haven’t flown for 50 years.

“I had to get a passport again. It doesn’t worry me, I’m quite happy to go. The only thing that I’m concerned about is I’m going to have to wear these compression socks as I’m on blood thinners. But it’s going to be worth it. To be able to give him a hug is going to be wonderful.”

The grandfather-of-three is taking the 22-hour flight on his own as Barry is sadly too ill to travel. Barry, 81, a former assistant manager for an engineering company, lives in Ripon, North Yorkshire, in the U.K., with his wife Winifred.

John, who was in the Navy, died in 2010 at the age of 73. He lived in Wigan, Lancashire, with his wife and son. Geoff lives just south of Sydney, Australia, and has eight children himself, with his most recent job being working with horses before he retired.

Geoff was put up for adoption by their father Albert as he couldn’t work his demanding job and look after a one-year-old after their mom Florence died of cancer suddenly. His adoptive family stayed in Northampton for several years before eventually moving to Australia, where Geoff has been ever since.

Ted said: “Mom died in 1944 at 30 years old, I believe it was cancer. Then it’s a little bit of a blur in those early days, I vaguely remember mum in a bed in a room in Northampton. I don’t recall her death and her funeral. The adoption was carried out on October 31, 1945 in the afternoon. I would have been about six when he was adopted, but I can’t remember him as a child.

“I think dad had the photograph taken because he knew he was going to get Geoff adopted. He was working, he was an engineer. He just couldn’t bring up a baby and just thought it better to give him to someone else.

“They went out when he was quite young. I know he’s been married twice but I don’t know their names but he’s had eight children altogether. It’s his daughter that I’ve been in touch with on the internet and arranged to go over there with.

“He hasn’t filled me in on a lot about his life out there. To be honest when we’re chatting we’re usually ribbing one another about the cricket or ruggers [a slang word for rugby, or for one who plays rugby football, or a rugby shirt]. I shall be meeting Geoff and his daughter and son. I’ve also got a wedding of Geoff’s granddaughter and I’m invited to the wedding.

“We’re going to fly from Sydney to the Sunday Islands. I’m absolutely looking forward to it. It will be absolutely fantastic. A friend of Christopher, my son, has donated some Avios points, he donated them for Geoff. Now I’m using them to get to him, they cover most of the flight back.

“Flying out is costing me round about £1,600, coming back is costing me less than £100. There’s quite a lot to pay for but I will probably never be able to do it again so I thought I’d take the opportunity now.”

Barry, who is unable to fly due to medical constraints, added: “I’m extremely happy for them but quite envious of Ted being able to go. I can’t sit down for long enough, it’s quite heart-breaking as I just want to give him a hug, but it’s really lovely Ted will be able to do so. I’m just glad we’ve found him after all these years.”