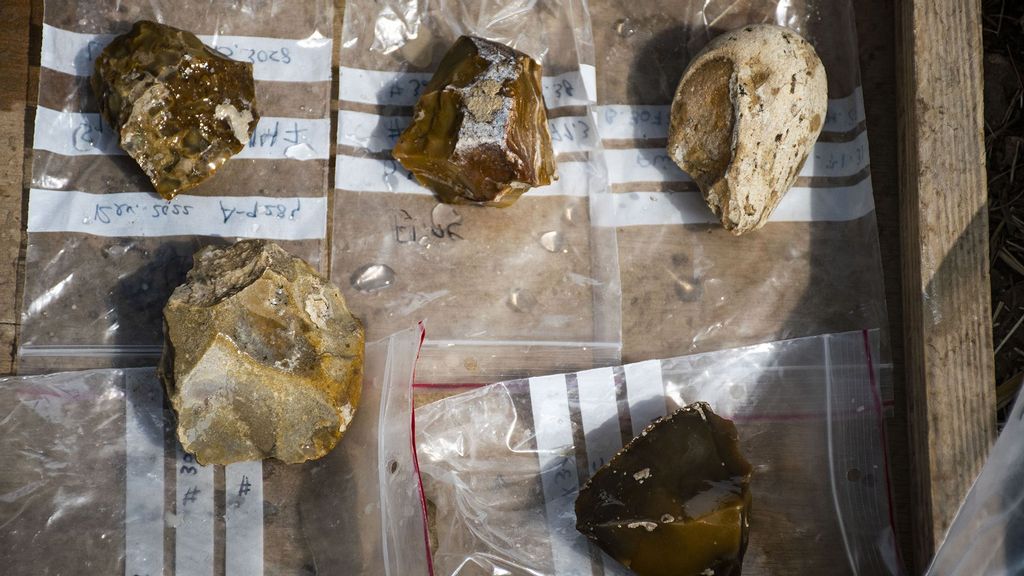 Flint vessels from the Paleolithic period, undated photo. They were unearthed in the southern coastal plain of Israel.  (Yoli Schwartz, Israel Antiquities Authority/Zenger)

This footage shows a tusk from an extinct, half-a-million-year-old giant elephant at an archaeological dig site in southern Israel after a visitor stumbled across it by accident.

Experts have said it is the largest complete fossilized tusk ever found at a prehistoric site in Israel or the Near East.

The exceptionally well-preserved tusk belonged to a member of a long extinct species of giant, straight-tusked elephants (Palaeoloxodon antiquus) and was dug up during a joint excavation named ‘Operation Elephant’.

This was carried out by researchers from the Ben-Gurion University and the Tel Aviv University in Israel at an excavation site in a village named Revadim in the southern region of the country.

The incredible find was announced by The Israel Antiquities Authority (IAA) in a statement Zenger News obtained on Wednesday, August 31.

This is after Dr. Eitan Mor, a biologist from Jerusalem discovered the prehistoric artifact, which measures 8.2 feet long and weighs 330 pounds, after reading up on elephants and visiting the archaeological site out of curiosity.

Dr. Mor said: “To my surprise, I spotted something that looked like a large animal bone peeping out of the ground. When I looked closer, I realized that it was ‘the real thing’, so I rushed to report it to the Israel Antiquities Authority”.

The discovery of the 500,000-year-old tusk will allow researchers to gain a greater understanding of the enthralling lives of prehistoric humans, according to the statement from the IAA.

The IAA added: “It is not an illusion, as gigantic elephants roamed and grazed the prehistoric landscape of the coastal plain of Israel half a million years ago, as attested by this exceptionally well-preserved ancient elephant tusk.”

Bewildered archaeologists along with IAA prehistorian Avi Levy were reportedly stunned when they arrived at the dig following the discovery.

Levy said: “From our previous archaeological excavations at Revadim, we knew that the site was settled in the Late Lower Paleolithic period, as stone and flint tools, as well as animal bone remains (including elephants) were retrieved but finding this half a million-year-old complete elephant tusk in such a good condition is something else!

“This is the largest complete fossil tusk ever found at a prehistoric site in Israel or the Near East.”

The IAA added: “Elephants roamed our region a million and a half years ago, living alongside with other large mammals, such as wild cattle, hippopotami, deer, wild boars, and wild horses. However, finding elephant remains at archaeological sites is uncommon, and this new discovery is of great scientific interest.”

IAA Archeozoologist, Dr. Lee Perry-Gal went on to explain that the prehistoric elephant species appeared in the region 800,000 years ago, and became extinct 400,000 years ago.

He added: “It was a gigantic elephant, larger than the present-day African elephant.”