He is estimated to have tackled around 10,500 fires during his career after dedicating five decades of his life to helping others.
By Simona Kitanovska September 5, 2022
Facebook
Twitter
Linkedin
Email 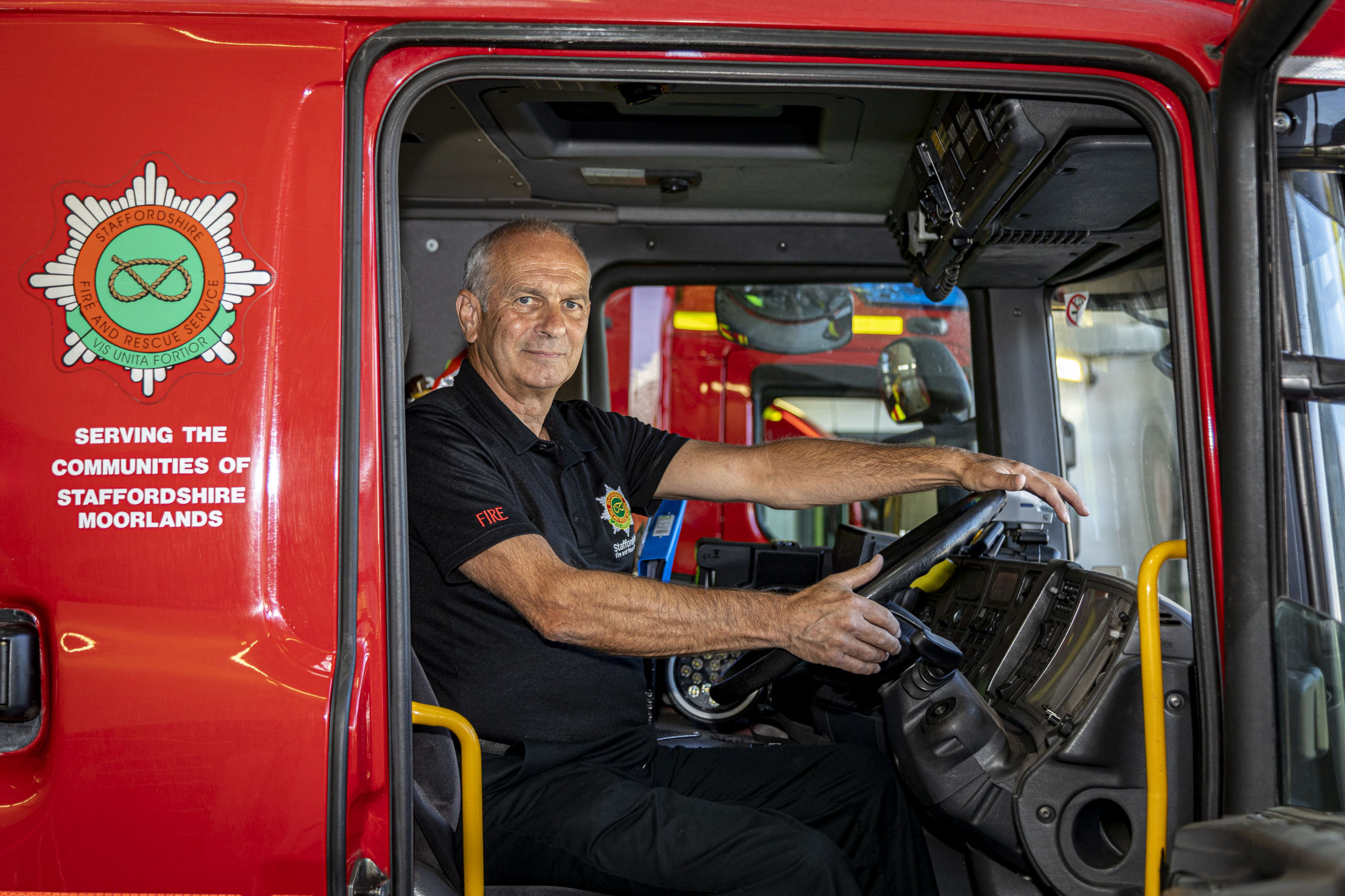 Kelvin Chell, poses for a picture at Newcastle Community Fire Station in Newcastle-under-Lyme, Staffordshire, in the U.K., in an undated photo. Chell is Britain's longest-serving firefighter and is finally hanging up his helmet after saving thousands of lives during a 50-year career. (Matthew Lofthouse, SWNS/Zenger)

Britain’s longest-serving firefighter is finally hanging up his helmet after saving thousands of lives during a 50-year career.

Kelvin Chell, 66, is retiring this weekend after spending half a century working for Staffordshire Fire and Rescue Service, located in the West Midlands region of England, in the U.K.

He is estimated to have tackled around 10,500 fires during his career after dedicating five decades of his life to helping others. Chell joined the service on September 4, 1972, as a junior firefighter aged 16 and will officially retire on Sunday, September 4–exactly 50 years later to the day.

When he first started out his helmet was made of cork, fire engines could only go at speeds of up to 40 miles per hour and he used hacksaws to free people from car crashes. The dad-of-two has since attended countless call-outs as he rose through the ranks–ranging from small fires and rescues to devastating explosions.

But he is now calling it a day with 50 years of service under his belt to spend more time with his wife, two children and three grandchildren. Chell, of Stoke-on Trent, said: “It’s surreal really, since I’ve joined I’ve never really wanted to leave. It’s just been a job that I’ve taken on for life.

“I started as a junior fireman, I was 16 straight from school–so this was my first and only job. I’ve never had any intention to leave and work somewhere else. Is it bad saying I was good at my job?

“To get to 50 years is wonderful, some people aren’t lucky enough to do 50 years in their career. But also to have worked with such a fine bunch of people throughout my career has been an honor. We are one big happy family. We’re all team players. Plus I owe my wife a holiday after 50 years. That’s first on the list once I leave.”

Chell was first fully stationed at Stoke’s Hanley fire station in 1974 before moving to Newcastle-under-Lyme, Staffordshire, in 1980, where he has been based since. He also became a qualified instructor to train new recruits and also a fire safety officer in 1999. Chell believes he has seen the service change for the better during his time working as a firefighter.

He added: “When I joined, my first fire helmet was made of cork, we had heavy woolen tunics, plastics leggings, plastic goggles. Whereas now all the gear is flame-retardant, offering much more protection to firefighters than 50 years ago.

“When I joined we had old Bedford engines which could only go 40 miles per hour, now we have quick Volvo’s and Scania’s. We also have state-of-the-art cutting equipment. We used to have hacksaws, oil and compressed air tools. But it did the job in those days. We managed to get people from cars and other incidents.”

Chell has attended numerous major incidents over the years–including when Keele Services, a freeway service station, set fire in 1984. He also tackled a series of devastating explosions, which occurred at a warehouse at the Permaflex factory in Longport, Staffordshire, in 1980.

Chell added: “People might remember the M6 Keele Services going up. They had the main restaurant on fire. A deep fat fryer took the whole bridge out and closed the whole motorway.

“I never forget my first death. You do remember these things but it’s part of the job I suppose. There was nasty vodka lorry crash on the M6 where this chap was trapped in the cab and died of burn wounds after the alcohol ignited.

“So we have to deal with high-impact situations–at the start we used to have a tin box with plasters but now we have advanced first aid training. We can mobilize a fire engine to help the ambulance service and have skills to sustain lives until the paramedics get there.”

Chell has also gone above and beyond the call of duty during his career and helped raise more than half a million pounds for charity. Chell, who has been married to wife Lorna, 66, for 38 years, added: “Through my career I’ve done a lot of fundraising for charity.

“It’s all for local hospitals, hospices and charities–it’s nice to give back to the community you serve. It’s been fun, we enjoy doing it.”

Chief Fire Officer Rob Barber, of Staffordshire Fire and Rescue Service, said: “Kelvin has been an inspiration to so many within our service. I have worked alongside him and I know how diligent and hardworking he is.

“He has maintained the highest standards throughout his incredible 50-year career and I am going to miss him greatly, as many of his colleagues will too. His fundraising has benefited some of the most vulnerable within Staffordshire and Stoke-on-Trent and he has impacted upon every single person who has met him within the Service.”