Growing up, the teen was self-conscious and tried to cover up in long-sleeved tops and scarves.
By Simona Kitanovska September 2, 2022
Facebook
Twitter
Linkedin
Email 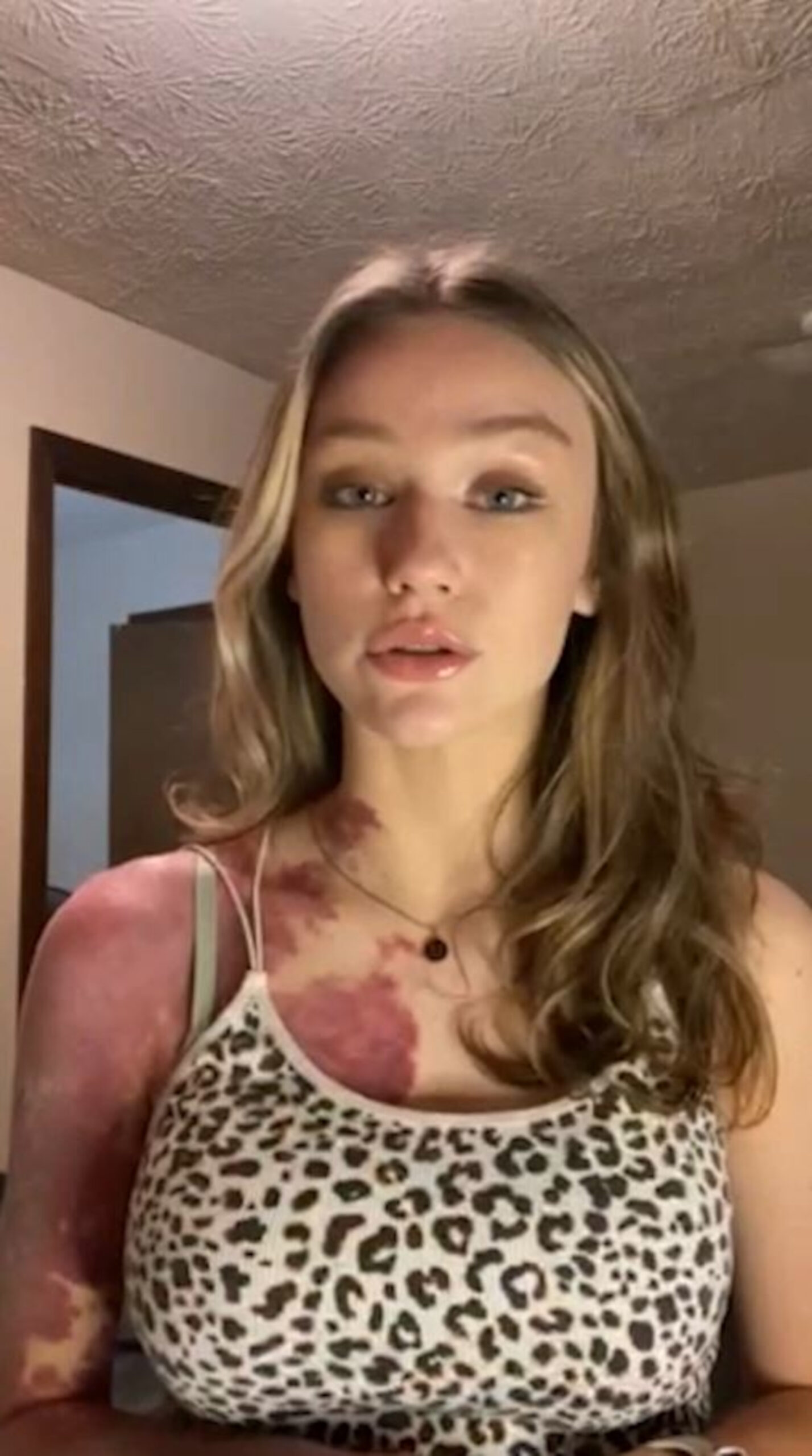 Lexi Chapman, 19,pose in an undated photo. Chapman, who has a rare condition bullied so badly she received death threats and left school now shows off her purple and red skin and has 'learned to love herself'. Note: Picture is screenshot from a video.(Lexi Chapman, SWNS/Zenger)

A young woman in Atlanta with a rare condition who was bullied so badly she received death threats and left school now shows off her purple and red skin and has ‘learned to love herself’.

Lexi Chapman, 19, was born with the red and purple mark covering her left arm and neck–which she believed was a port-wine stain: a vascular condition also known as nevus flammeus. Growing up, the teen was self-conscious and tried to cover up in long-sleeved tops and scarves. She says she was tormented by bullies every day at school who called her a “freak'” and teased her–comparing the mark to a “huge hickey”–and even sent death threats.

When she turned 18, Chapman looked into her “birthmark” further and discovered it was actually Klippel-Trenaunay syndrome–KTS–a rare condition causing triple the amount of blood vessels. If left untreated, it can be fatal and shorten someone’s life expectancy by 30 years, causing the bones and muscles to deteriorate.

Chapman was warned her arm will shrink over time. She now receives treatment every four to six weeks to treat her condition, but says there is constantly a threat of blood clots. She has learned to love herself and uses social media to reach out to other young girls who struggle with self-image.

“I struggled with mental health issues for years and bullies made high school a living hell. I was a happy child throughout primary school, and I didn’t care about my condition.

“As soon as I went to a different school and got to the age of 11, things rapidly changed,” said Chapman, of Atlanta, Georgia, who works as a phlebotomist, which is someone who takes blood samples from patients to be examined in a laboratory to quickly diagnose various diseases and conditions.

She added: “I would cover up and wear long-sleeved high-neck shirts to try and hide my skin, but nothing worked. They would call me a freak and say I had hickeys, I even received death threats.”

“I am happy I am finally at peace with my appearance, and I want to help to inspire other girls to overcome their body confidence issues. Although I am constantly scared I could have a blood clot that kills me, I was relieved to get a diagnosis meaning my condition can be treated properly,” Chapman recalled.

Throughout her childhood, doctors misdiagnosed her as having a port wine stain birthmark and, not knowing any better, her family accepted the diagnosis. Later in life, she was also misdiagnosed with severe eczema too.

As she got older, she realized something wasn’t right when she would lose feeling in her hand and fingers and her arm would go numb. It took until the age of 18 for her to be diagnosed with KTS and she says it was a bittersweet moment as she was both relieved to have a diagnosis but scared of the severity of it.

“I knew it must have been more than a birthmark because I had painful symptoms. For years doctors dismissed it being anything other than a birthmark, and my boyfriend encouraged me to go and see a specialist. My mom felt so bad because she dismissed my pleas to get answers elsewhere. I know she was only doing what she thought was best,” Chapman said.

At the age of 13, the constant bullying led the schoolgirl to suffer from anxiety, depression and suicidal thoughts. At 16, before sitting for a biology exam, the bullying led her to reach a breaking point and she left school that very day and didn’t return. Her mother, Misty Chapman, 40, disenrolled her daughter the same day, homeschooling her from then on.

“I walked out of my exam to the principal’s office and never went back. I will never understand why kids I knew since primary school were so cruel about my condition. I didn’t choose to be born this way and I couldn’t do anything about it. My body isn’t anyone else’s business,” Lexi Chapman recalled.

“I want to help other girls and make sure they don’t lose their childhood like I did. I missed out on playing sports, going to football games and parties and I regret it so much, I have no happy memories from that time,” she said.

Because she was misdiagnosed with severe eczema, the creams and treatment prescribed didn’t work. Fortunately, Chapman didn’t have laser skin removal that was offered to her because her parents felt it was too risky and painful.

Now her condition is managed with sclerotherapy. Doctors inject her with a solution to disintegrate her extra veins every four to six weeks. Following the sclerotherapy, she has to have a camera down her throat and two small cameras down her back to check she hasn’t developed new blood clots.

Chapman often loses feeling in her arm and hands and suffers from migraines. Despite her health condition, Chapman has come out the other side and is now championing young girls to love their bodies however they may look. She finished her high school diploma and now studies phlebotomy at West Georgia College, Georgia.

“I’ve had therapy and now I know how to deal with negative thoughts. I’m now confident and I wear short sleeves and tank tops,” she said. Despite her new-found self-confidence, strangers still stop her in the street and ask what is wrong with her.

“I was in the supermarket two weeks ago and an old man stopped me to ask what was wrong with me. It frustrating I still get these comments when I feel secure in my own skin,” she said.

Chapman’s boyfriend, Michael, 20, is her ‘rock’ and helps her deal with uncomfortable situations. Now she is a mental health and body confidence advocate and helps young girls to feel comfortable in their own skin.

“I go out to local schools and girls’ clubs to talk about my experience and to try and give others the tools to overcome any negative thoughts they have about themselves,” she said.

“I get so many messages from girls who reach out to say they hate their appearance. I want everyone to know they are beautiful in their own special way,” Chapman said finally.