It is armed with a combination of up to 38 Spearfish torpedoes and Tomahawk Block V cruise missiles.
By Simona Kitanovska September 2, 2022
Facebook
Twitter
Linkedin
Email 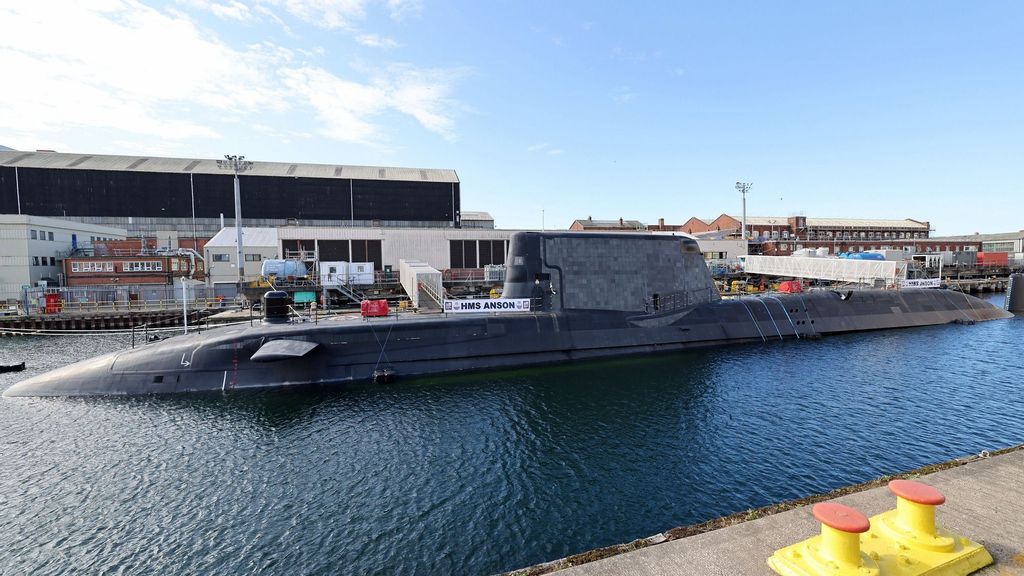 The HMS Anson, pictured in an undated photo. The submarine was welcomed into the Royal Navy fleet at a ceremony in Barrow, in Cumbria, in north-western England, in the U.K., on Wednesday, August 31, 2022. (LPhot Kevin Walton,MOD Crown Copyright,SWNS/Zenger)

A submarine touted as the world’s most advanced hunter-killer submersible has been welcomed into the Royal Navy fleet.

The submarine was welcomed into the fleet at a ceremony in Barrow, in Cumbria, in north-western England, in the U.K., on Wednesday, August 31.

The £1.3 billion HMS Anson is touted as offering naval stealth and striking power, and is able to gather vital intelligence, protect other Royal Navy vessels from threats above and below the waves, and destroy enemy military infrastructure with pinpoint accuracy.

The submarine was commissioned at BAE Systems’ yard in Cumbria in England’s northwest in front of her crew and their families, plus naval leaders, Secretary of State for Defense Ben Wallace, Prime Minister Boris Johnson and Australian Deputy Prime Minister Richard Marles, and the patron, Julie Weale.

It has taken more than 11 years–and some 20 million hours’ work by an estimated 10,000 people from 400 firms and organizations across the U.K.–for the 8,000-ton vessel to be ready for action. Anson is the fifth of the new Astute-class submarines to join the Royal Navy fleet, joining HMS Astute, Ambush, Artful, and Audacious.

The submarine’s first Commanding Officer, Commander David Crosby, said that given the effort, skill and enterprise invested in constructing the submarine–made more challenging over the past two and a half years by the restrictions imposed by the pandemic–“HMS Anson would go on to be the best Astute-class submarine yet.”

He continued: “Among tough competition that is a bold claim, but I fully believe it; she will be successful on operations for years to come and be envied by nations across the globe. The good fortune to be commanding officer of the most advanced and capable attack submarine ever built in the U.K. on her commissioning day is the greatest honor of my submarine career.”

Also among those eager to see Anson in action is the new head of the Royal Navy Submarine Service, Commodore Paul Dunn.

“The commissioning is a significant milestone for both Anson and the Submarine Service and I would like to thank the crew, BAE Systems and the ‘submarine enterprise’ for the delivery of our fifth Astute class,” Dunn said. “I look forward to welcoming Anson to Her Majesty’s Naval Base Clyde, the home of the Submarine Service, in the near future.”

Armed with a combination of up to 38 Spearfish torpedoes and Tomahawk Block V cruise missiles, Anson can take out enemy ships/submarines, destroy land targets up to 1,000 miles away, and launch and recover Royal Marines raiding and reconnaissance teams–among other capabilities.

“Given the world we live in, there is no more important tool in the United Kingdom’s arsenal: silent, unseen, and a key instrument of our global, modern, ready Royal Navy. HMS Anson is the cutting edge in submarine design and construction&mldr; ensuring operational advantage in the underwater battlespace, the last great stealth domain.

“The Royal Navy’s nuclear submarines: protecting critical national infrastructure, securing the nuclear deterrent, and ready to deliver firepower against those who would do us harm,” First Sea Lord, Admiral Sir Ben Key said.

The Astute program is one of the most complex engineering projects in the world. Anson will remain in Barrow for several more weeks undergoing final checks, tests and tweaks to her system before she sails for her future home at HM Naval Base Clyde in Faslane, Scotland, where she will prepare for sea trials.

The Chaplain of the Fleet, The Venerable Andrew Hillier, blessed Anson and her 98 crew after Commanding Officer, Commander Crosby, read out instructions received from the Navy’s Fleet Commander to commission the submarine and prepare her for front-line service.

Proceedings–which saw the Royal Marines Band Scotland provide the appropriate music–ended with the White Ensign being hoisted for the first time and a commissioning cake cut by Mrs. Weale and the youngest member of the crew. Anson’s patron, Julie Weale–whose husband was head of the Silent Service before retiring in 2020–told those present that the boat was “fabulous,” and she was keen now to see the submarine at sea and enter service.

“I wish you all the best of luck with what is to follow and will be in full support of everything you do,” she added.

Anson was officially named by Weale in the same yard in December 2020 with a bottle of cider smashed against the hull. Cider was favored by her namesake, 18th-Century Admiral George Anson, as a cure for scurvy. HMS Anson was rolled out of the cavernous Devonshire Dock Hall in April last year and slowly lowered into Wet Dock, since when engineers and crew have been working on her systems and testing equipment.

In February, the boat conducted a dive in Barrow to ensure the dive/surface systems and ballast tanks, depth sensors and sonars were in full working order and Anson was accurately balanced and stable when submerged.