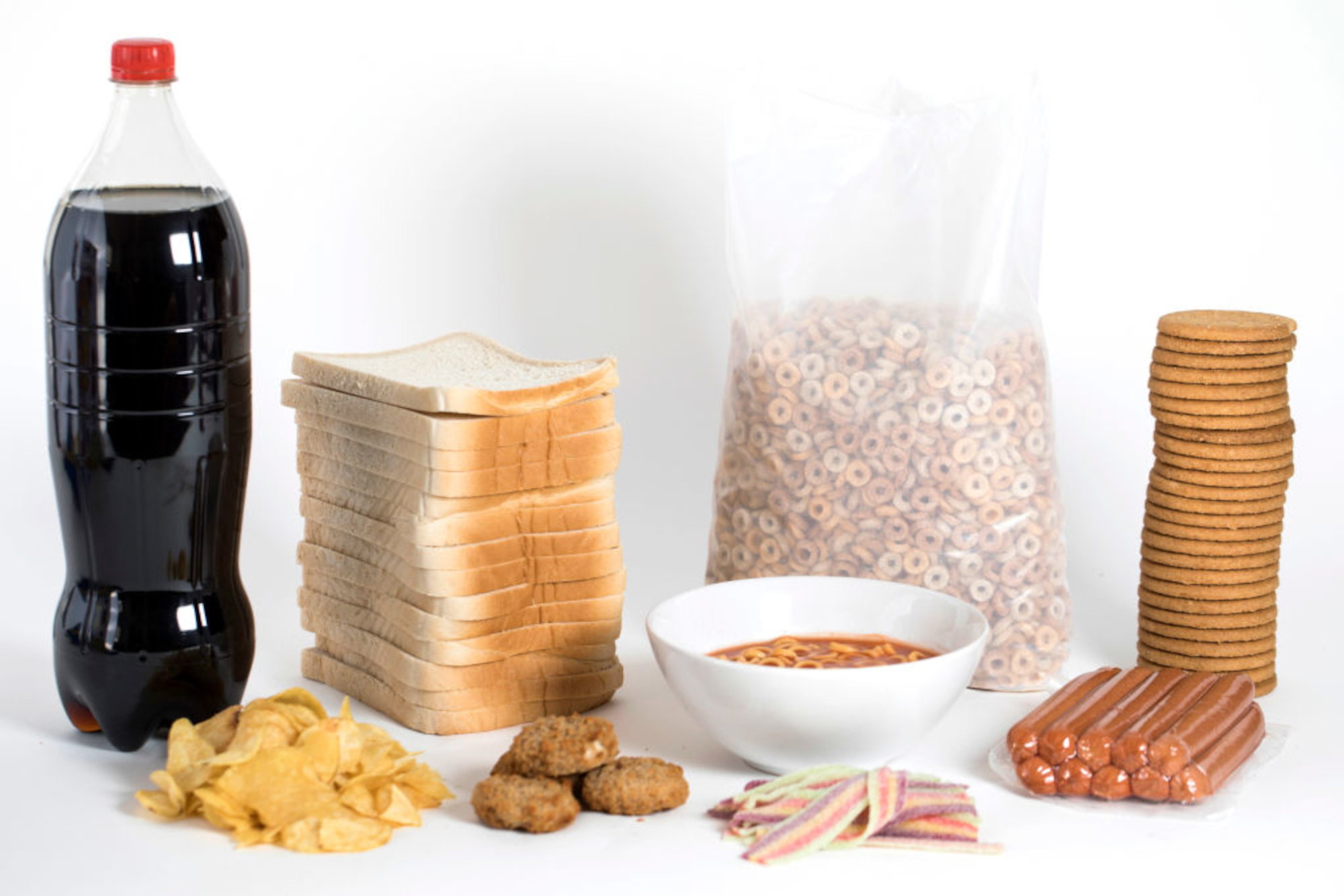 A photo illustration of 'Ultra Processed' foods on February 16, 2018 in London, England. Gorging on junk food raises men's risk of bowel cancer by almost a third, according to new research. (Photo illustration by Dan Kitwood/Getty Images)

Gorging on junk food raises men’s risk of bowel cancer by almost a third, according to new research.

A study of more than 200,000 people found those who ate the most were 29 percent more likely to develop the disease. It did not apply to women, perhaps because they eat more ultra-processed products that are good for them–like yogurt.

Lead author Dr. Lu Wang, of Tufts University in Massachusetts, said: “We started out thinking colorectal cancer could be the cancer most impacted by diet compared to other cancer types.

They range from bacon sandwiches, sausage rolls, burgers, pizzas and soft drinks to ready meals, cookies, cakes–and yogurt. They make up half the average Briton’s diet. The strongest link with bowel cancer came from meat, chicken and fish-based products.

Dr. Wang said: “These include some processed meats like sausages, bacon, ham and fish cakes. This is consistent with our hypothesis.”

There was also an association with guzzling fizzy drinks, fruit-based beverages and milkshakes. For many people, the convenience of pre-cooked and instant meals may make it easy to overlook the less-than-ideal nutritional information, said the researchers.

But the study did not find an overall increased risk for women who consumed higher amounts of ultra-processed foods – possibly because composition differed.

The team tracked 159,907 women and 46,341 men in the U.S. over more than a quarter of a century. They filled out a survey every four years about the frequency of consumption of roughly 130 foods. Participants were placed in five groups according to their intake of ultra-processed products. Men in the top 20 percent were most at risk for bowel cancer.

But Prof. Zhang said: “We found an inverse association between ultra-processed dairy foods like yogurt and colorectal cancer risk among women.” Most junk food is packed with fat and added sugar and salt–and low in fiber and vitamins.

Co-senior author Dr. Mingyang Song, of the Harvard T.H. Chan School of Public Health in Boston, said: “Further research will need to determine whether there is a true sex difference in the associations, or if null findings in women in this study were merely due to chance or some other uncontrolled confounding factors in women that mitigated the association.”

There could also be factors beyond the poor diet quality of ultra-processed foods that impact the risk of developing colorectal cancer. The role of food additives in altering gut bacteria, promoting inflammation and contaminants formed during food processing or migrated from food packaging may all promote cancer development, according to Prof. Zhang. Potentially carcinogenic contaminants have been found in heat-treated processed foods.

Dr. Song said: “Cancer takes years or even decades to develop, and from our epidemiological studies, we have shown the potential latency effect–it takes years to see an effect for certain exposure on cancer risk. Because of this lengthy process, it’s important to have long-term exposure to data to better evaluate cancer risk.”

The volunteers were all nurses or health workers who had been recruited to take part in three long-running studies dating back from 1986 to 2015. Analyses took into account race, family history of cancer and other health issues, physical activity, alcohol and caloric intake, aspirin use and smoking and menopausal status. Healthcare workers may be more inclined to eat healthier and lean away from ultra-processed foods. Processing has also changed over the past two decades.

Prof. Zhang said: “But we are comparing within that population those who consume higher amounts versus lower amounts. So those comparisons are valid.”

The same team previously identified a trend in increased ultra-processed food consumption in U.S. children and adolescents. Both studies underscore the idea that many different groups of people may be dependent on ultra-processed foods in their daily diets.

Prof. Zhang said: “Much of the dependence on these foods can come down to factors like food access and convenience. Chemically processing foods can aid in extending shelf life, but many processed foods are less healthy than unprocessed alternatives. We need to make consumers aware of the risks associated with consuming unhealthy foods in quantity and make the healthier options easier to choose instead.”

Dr. Wang knows change won’t happen overnight, and hopes this study, among others, will contribute to changes in dietary regulations and recommendations.

She added: “Long-term change will require a multi-step approach. Researchers continue to examine how nutrition-related policies, dietary recommendations, and recipe and formula changes, coupled with other healthy lifestyle habits, can improve overall health and reduce cancer burden.It will be important for us to continue to study the link between cancer and diet, as well as the potential interventions to improve outcomes.”

During follow up 1,294 and 1,922 cases of bowel cancer were documented among men and women, respectively. Three years ago a study by French scientists found eating too much ultra-processed food knocks decades off life expectancy.

A study of almost 45,000 people found deaths from cancer, heart disease and other illnesses were linked to high consumption. Nutritionists want ready meals, frozen pizzas, biscuits and cakes to carry cigarette-style front of packet health warnings, according to new research. They say most people are in the dark about the consequences of eating them–after being left bamboozled by clever marketing.