The images were obtained from the National Guard of Ukraine on Wednesday, August 31.
By Joseph Golder September 2, 2022
Facebook
Twitter
Linkedin
Email 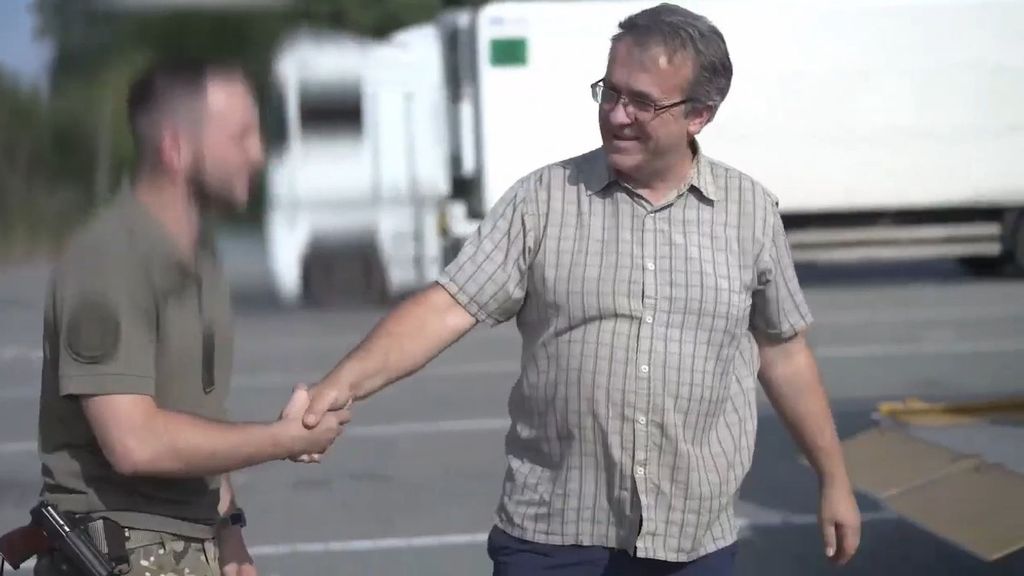 Paul Zakovsky, a volunteer from Great Britain, shakes hands with Ukrainian soldier in Ukraine in undated footage. Paul collected and gave almost a full truckload of necessary items for the military of one of the units of the Northern Association of the National Guard.  (@NGUmainpage/Zenger)

This footage shows a man from Hertfordshire, England man whose father was Ukrainian handing over a truck full of humanitarian aid to Ukrainian troops.

The video shows British man Paul Zakovsky, a county councilor from Hertfordshire, in southern England, in the U.K., introducing himself and explaining that his father was from Ukraine.

He added: “When the war happened, I decided that I needed to help.” He can then be seen opening up the truck to reveal supplies collected by volunteers in Britain for Ukrainian soldiers.

Zakovsky can then be heard saying how he sees a lot of his father in the Ukrainian people. He said that his dad was: “pig-headed, like a bull, he just wouldn’t give up. When he decided something, he was going to do it. And I see that in a lot of Ukrainians.

“I don’t understand what Russia wants to gain, or thinks it can gain from this. It’s just an incredibly stupid thing to have done. And I look forward to the day that Ukraine wins.”

The images were obtained from the National Guard of Ukraine on Wednesday, August 31, along with a statement saying: “Volunteers from Great Britain handed over humanitarian aid to the Guardsmen. British volunteers collected almost a full truckload of necessary items for the military of one of the divisions of the Northern Alliance.

“Mattresses, sleeping bags and many other necessary things will now come in handy when the Guardsmen perform official combat tasks in the hottest spots. We are very grateful to our friends, volunteers from Great Britain, for their help, as well as to Paul Zakovsky for his faith in the Ukrainian people.

“We thank all international partners for understanding and supporting the soldiers who defend our Motherland from the enemy. Together we will definitely win!”

The images and statement were also relayed by the Ministry of Internal Affairs of Ukraine.