The footage was obtained from the State Emergency Service (SES) of Ukraine.
By Joseph Golder September 1, 2022
Facebook
Twitter
Linkedin
Email 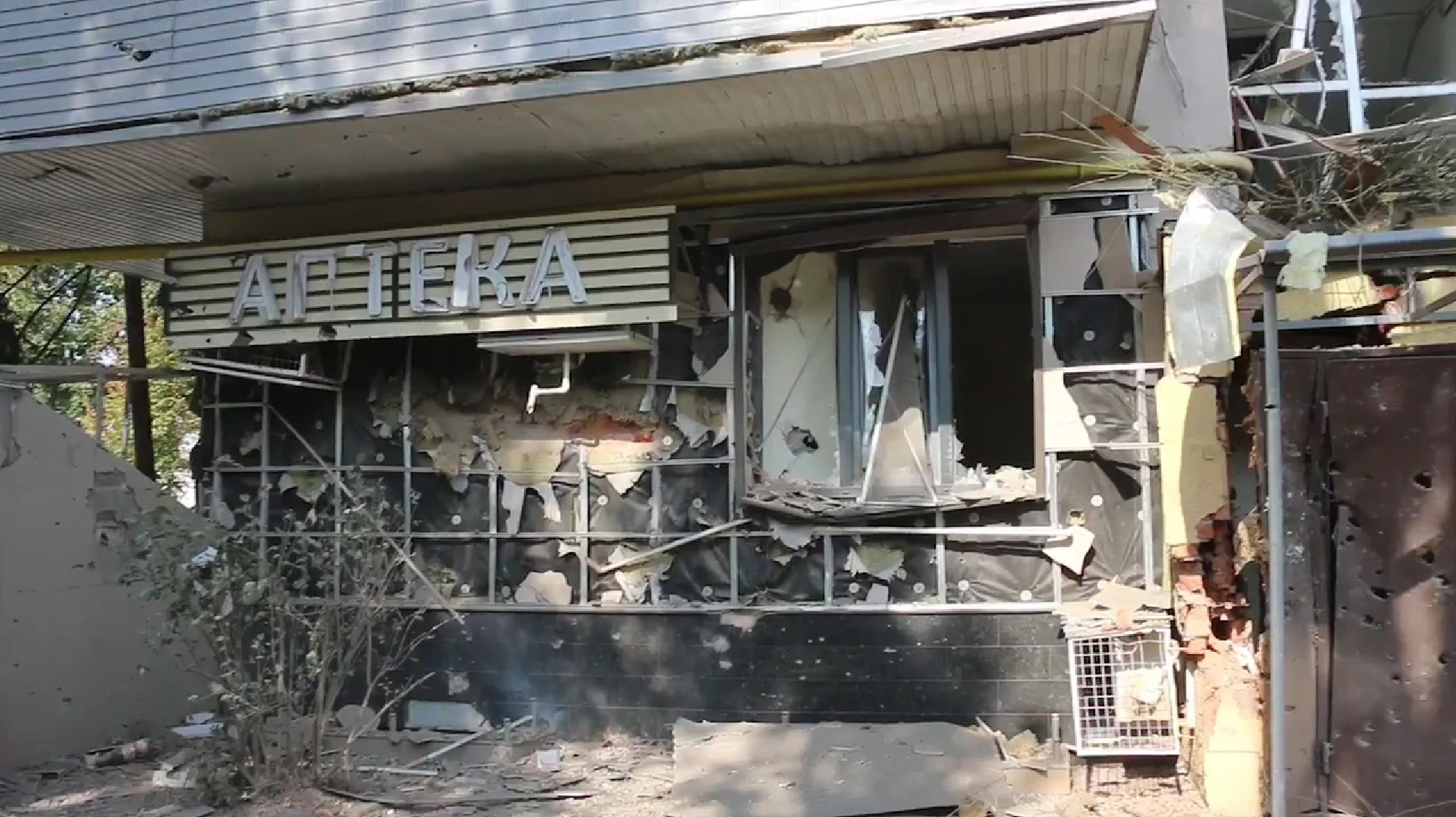 Ukrainian authorities have said that Russia has launched an intensive shelling campaign on Kharkiv city center that hit a nursery school and killed four people.

A first piece of footage, obtained from the State Emergency Service (SES) of Ukraine, on Tuesday, August 30, shows firefighters and rescue workers working at the scene of damaged residential buildings in the city center. A group of buildings can be seen having been particularly badly hit, with smoke emanating from their destroyed roofs. Firefighters can be seen hosing down smoldering wooden beams as the footage ends.

A second piece of footage obtained from the Ukrainian police shows damaged vehicles in the streets. The police footage shows damaged buildings, with officers seen working at the scene. A child’s pushchair and a bicycle can be seen lying damaged on the ground before the footage ends.

The first piece of footage was obtained from the SES of Ukraine along with a statement saying: “The occupiers again carried out massive shelling of the central part of the city of Kharkiv.

“On the morning of August 30, the enemy fired artillery at residential areas, a nursery school and a park area of &ZeroWidthSpace;&ZeroWidthSpace;the Shevchenkiv district of the city of Kharkiv. As a result of the shelling, according to preliminary data, four people died, seven more people received shrapnel injuries. They were admitted to the hospital by the emergency medical team.

“Also, as a result of the shelling, a fire broke out on the roof of a four-story residential building. The area of &ZeroWidthSpace;&ZeroWidthSpace;the fire was about 50 square meters. The wooden structures of the roof, ceiling and internal partitions were on fire. 10 units of fire-rescue equipment and 60 personnel of the State Emergency Service were involved to eliminate fires and the consequences of shelling.

“In addition, sappers of the State Emergency Service worked at the site of the shelling, which examined the affected area and removed the remains of explosive objects. We will endure. Everything will be Ukraine!”

The National police of Ukraine said in a statement on Tuesday, August 30: “Artillery strike in the central part of Kharkiv – police are documenting the consequences of shelling.

“There are dead and wounded. The exact number of victims is being established. On August 30, around 10:00 Russian military launched about nine strikes in the city center.

“The shells hit a five-story residential building, a preschool educational institution, one of the markets of Kharkiv and a park. As a result of the hits, the buildings suffered damage, as well as the surrounding area, and cars were damaged.”

The police confirmed that they had opened a criminal case.

The Kharkiv Regional Prosecutor’s Office said on Tuesday, August 30: “Under the procedural leadership of the Shevchenkiv District Prosecutor’s Office of Kharkiv, a pre-trial investigation has been launched into the fact of violation of the laws and customs of war, combined with intentional murder (Part 2 of Article 438 of the Criminal Code of Ukraine).

“According to the investigation, on August 30, at around 10 a.m., the Russian army once again shelled the residential quarters of the city of Kharkiv. The Shevchenkiv district came under fire. A number of houses and cars, a kindergarten and a recreation park were damaged.

“As a result of the shelling, four people died, eleven more were injured. Previously, the shelling was carried out from an artillery installation. In the future, the materials of the criminal proceedings will be transferred to the Office of the Security Service of Ukraine in the Kharkiv region.”

Zenger News contacted the State Emergency Service (SES) of Ukraine for further comment, as well as the Russian Ministry of Defense, but had not received a reply at the time of writing.