People living remote depend on electricity and alternative fuel sources for heat because they have no connection to the gas grid.
By Simona Kitanovska September 1, 2022
Facebook
Twitter
Linkedin
Email 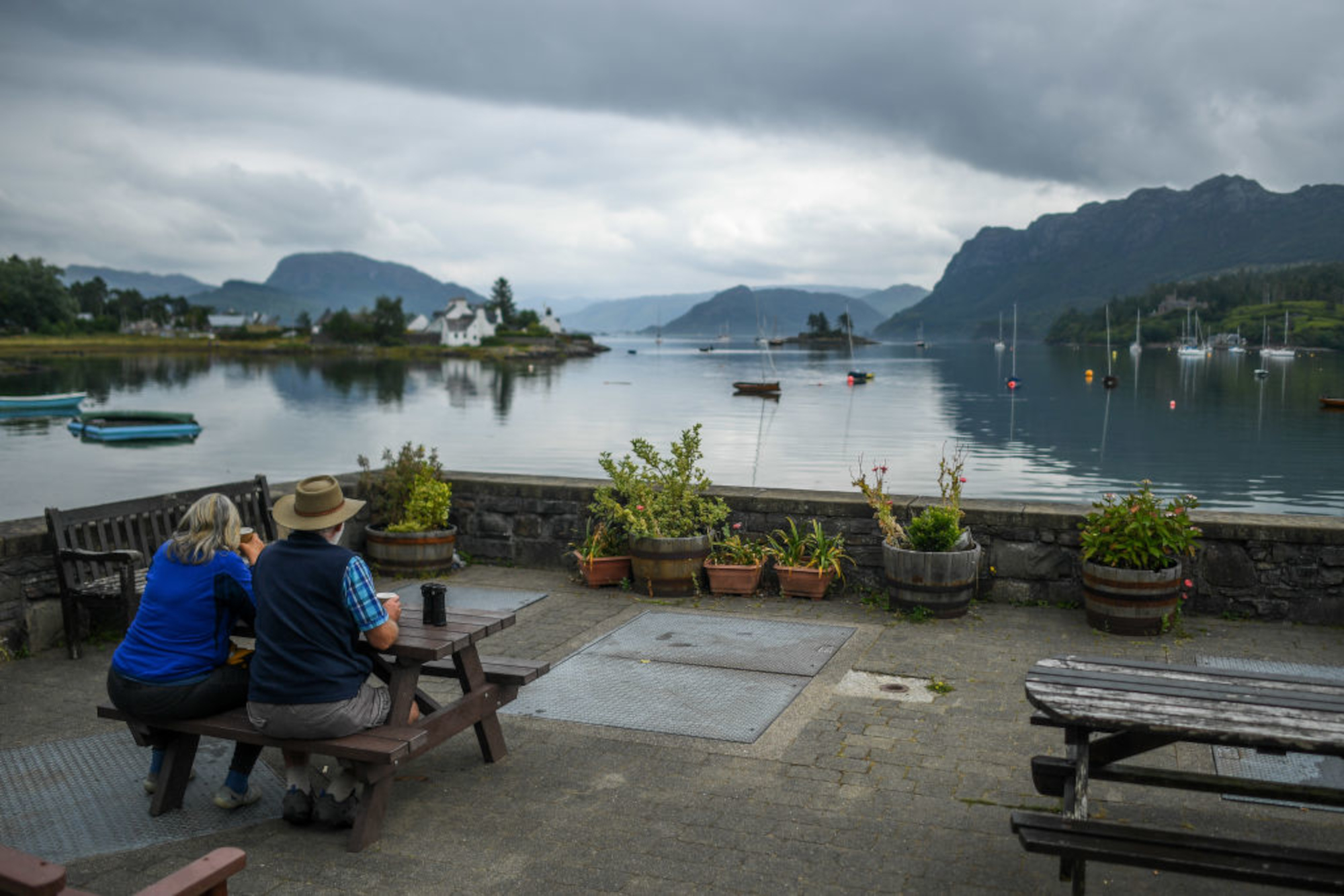 A couple are seen sat at a table on July 27, 2021 in Plockton, Scotland. Experts are warning that people living in remote places in Scotland, such as the Highlands and Island could ‘freeze or starve’ as remote homes face highest bills. (Photo by Peter Summers/Getty Images)

People living in the Scottish Highlands and Islands could “freeze or starve” to death as remote homes face the highest electricity bills, experts warned.

Citizens Advice Scotland said “people will die” if support is not urgently put in place amid the energy price cap crisis. Citizens Advice is a U.K. nonprofit that provides a national helpline and other services, such as legal referrals and information about political rights.

Householders in the Highlands and Islands and other rural places already pay the most for goods and services, and suffer the highest levels of fuel poverty in the United Kingdom. A Scottish government report estimates the minimum cost of living in remote rural Scotland is between 15 percent and 30 percent higher than in urban parts of the U.K.

People living far from towns are more dependent on electricity and alternative fuel sources for heat because they have no connection to the gas grid. Many also rely heavily on private cars for transport.

“They will freeze or they will starve. Everybody is being affected by the high fuel bills right now, but people in rural areas face particular challenges. Many rural households are not connected to mains gas and rely on expensive alternatives such as oil or LPG (liquid petroleum gas). Households without mains gas are more likely to be in fuel poverty and off-gas fuel prices are not regulated,” said Grace Remmington, of Citizens Advice Scotland.

“The further north you go, the colder and wetter it is, and in addition rural areas tend to have older, less efficient housing so people need to use more energy to stay warm and well. It’s important to understand that fuel poverty rates were already high even before the current energy cap crisis.

“We’ve been very clear that, unless the government give people more help, people will die this winter. They will freeze or they will starve. It is important to make sure rural communities aren’t forgotten in the energy crisis,” Remington said.

Rhoda Grant, a member of the Scottish Parliament representing the Labor Party for the Highlands and Islands, said she is already hearing of people being admitted to hospital because they are starving.

“If that’s what’s happening now, it’s going to be ten times worse in the winter. Food banks have already given out more food parcels this year than they did the whole of last year. I’m trying not to scare people, because there are many whose mental health is being impacted because they’re afraid,” Grant said.

“They’re maybe just coping now but they’re thinking if this gets worse they can’t. So we’ve got physical and mental health troubles coming down the road, which then falls back on services. It’s going to cost the people and the public purse to deal with it,” Grant said.

Di Alexander is chair of the Highlands and Islands Housing Associations Affordable Warmth Group, which lobbies on fuel poverty issues.

“There’s a lot to be worried about. The energy system is broken. It’s fairly obvious who is going to suffer most. The costs are going to hit the poorest the hardest. They don’t have any wiggle room. We know people are already turning their heating off,” Alexander said.

“Cutting energy use is one of the few things you can do to save money, so people are going to switch off and go cold – suffering all the damaging health and welfare effects that brings. First and foremost is to get help to households that need it most,” he said.

Michael Matheson, Scotland’s Cabinet Secretary for Net Zero, Energy and Transport, said the Scottish government would do “everything” it could to mitigate the effects for consumers. An extra £1.2 million of funding for energy advice services was announced on Thursday, August 25, while a £2 million Social Housing Fuel Support Fund is set to open this week.

“Our foremost concern is for those in or at risk of fuel poverty and it is imperative that those worried about or struggling with heating their homes access the information and support they need to reduce their energy bills. No single government, company or organization can solve this crisis alone.

“It requires a collective response commensurate to the situation. We will continue to work with our partners, energy companies and stakeholders to do everything we can to help the people of Scotland through this deeply unsettling time.

“We will also continue to press the U.K. government to reform the energy market to prevent this situation occurring again in the future,” Matheson said.