The dad-of-three then sent the two men fleeing from his store empty-handed by chasing them out of the door.
By Simona Kitanovska September 1, 2022
Facebook
Twitter
Linkedin
Email 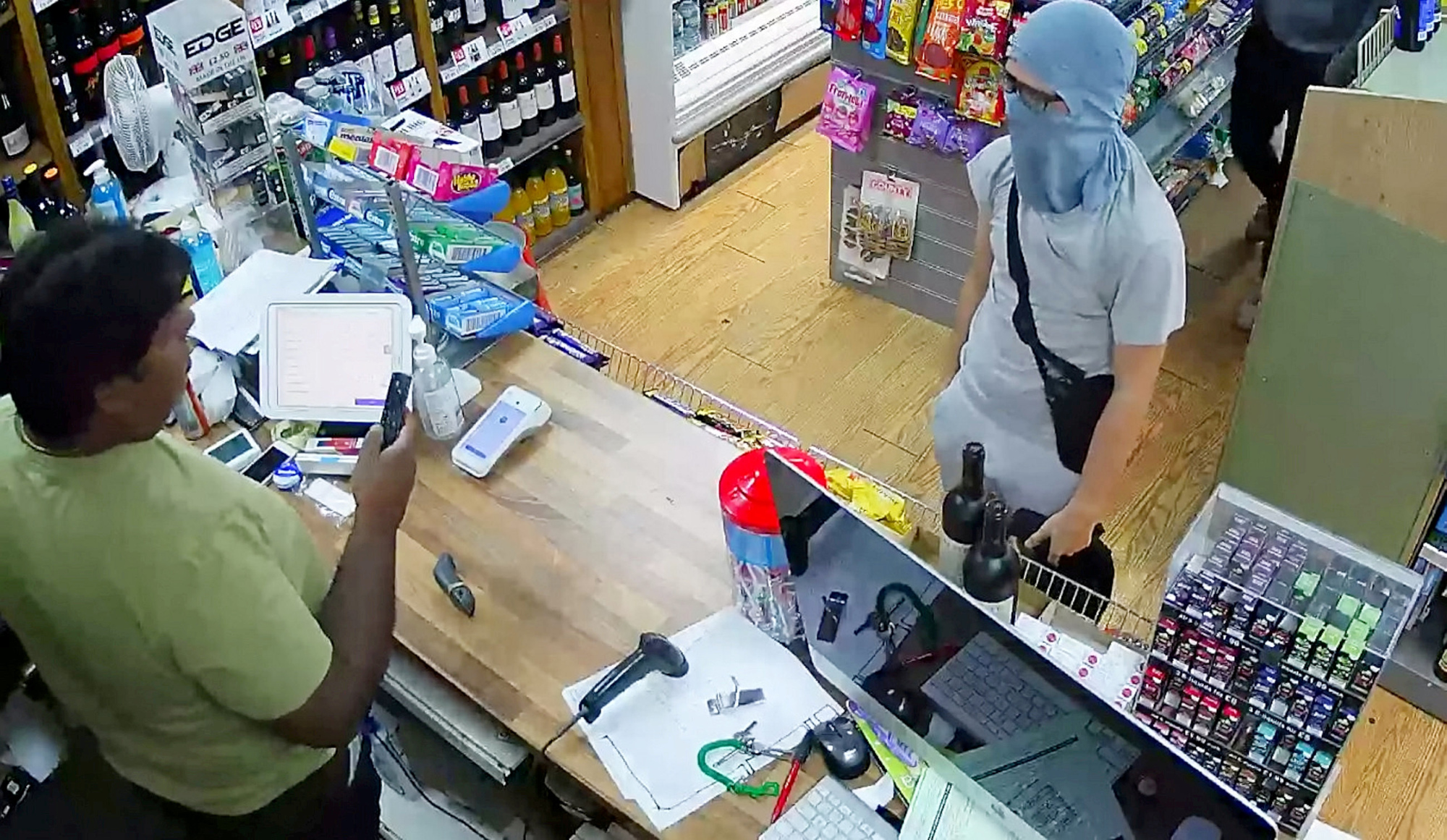 Dramatic CCTV shows the moment a would-be robber messed with the wrong store owner, Dilan Mendis, who turned out to be e a former special police constable and chased him off with a bottle of vodka out of his store in Worcester, in the U.K. on August 26, 2022. (Dilan Mendis,SWNS/Zenger)

Dramatic CCTV shows the moment a would-be robber messed with the wrong store owner–a former police officer who chased him off with a bottle of vodka.

Dilan Mendis, who spent 12 years serving with the Metropolitan Police, the police force for the Greater London area in the U.K., was behind the counter when two masked men entered his store at 5 p.m. on Friday, August 26.

One suspect then approached the cash register and demanded Mendis to fill a rucksack with disposable e-cigarettes at Bath Wines, a store in Worcester, a city in central England’s West Midlands region, in the U.K.

The store owner can be heard pleading with the criminals, saying “come on brother, I work hard for my money” before reaching for his phone to start calling the police. One of the would-be thieves shouts “put the phone down man” and tries to get behind the counter, at which point Mendis grabs a bottle of vodka from the shelf.

The dad-of-three then sent the two men fleeing from his store empty-handed by chasing them out of the door. Mendis said the thugs probably didn’t expect an experienced former police officer to be behind the cash register when they targeted his business.

“I was not too scared as I have dealt with these kinds of incident whilst working for the Met Police. I saw on CCTV that there were two men speaking outside the shop for couple of minutes, then both came in.

“I asked him to remove the mask and he said he couldn’t do that, then he asked for all of the disposable vapes, so I tried to look around everywhere to buy time. I tried to call the police and he asked me to put the phone down and I carried on, so he came around the back to behind the counter to stop me, so I asked him to wait but he still came. I pushed my chair towards him so he couldn’t come near, then I grabbed a bottle of vodka and chased him out of the shop,” Mendis added.

Mendis, who runs the shop with his wife Suzanne and children Nicholas, Rian and Tianna, shared footage of the robbery on Facebook in a bid to identify the culprits. One of the men is wearing a blue mask and glasses while the other who lingers at the back of the shop is wearing a dark jumper and trousers.

“These boys tried to rob Bath Wine, asking for disposable vapes but didn’t succeed. We have informed the police. If you know these boys please let us know so I can inform the police,” he wrote.

“Talk about picking on the wrong guy, lol. Hope they get caught soon,” one person commented.

“And the award for the worst attempted robbery of all time goes to the milky bar kid,” another added.

A third person wrote “looks like he has put a pair of pants on his head” while another said: “Harry Potter and badmanz of Bath Road, innit”

“Well done to the owner for standing his ground. No one should feel unsafe in their workplace. Its not a joke, it’s disgraceful,” yet another commented.

Mendis said he used the panic button at the shop but by the time he received a call from the security company, the men had run off.

He has also reported the attempted robbery to West Mercia Police.