She has halved her dress size and says she's never been happier.
By Simona Kitanovska August 31, 2022
Facebook
Twitter
Linkedin
Email 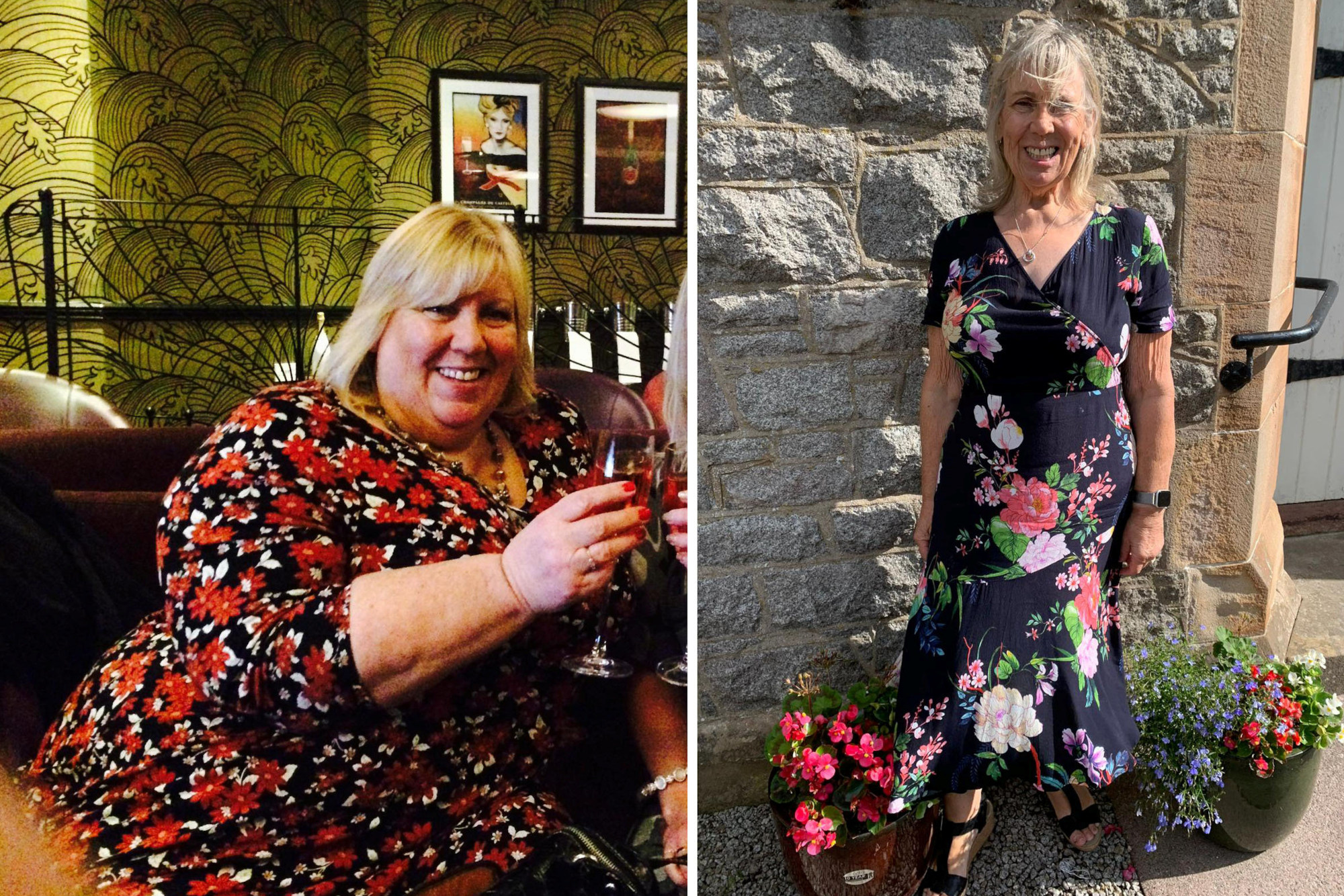 Fiona Neilson,64, before and after her weight loss, both undated photos. She struggled until she found Slimming World in October 2021–and by June 2022 she had lost 63 pounds. (Fiona Neilson,SWNS/Zenger)

A woman who used to “weigh more than the scales could measure” has halved her dress size, and says she feels 40 years younger.

Fiona Neilson, 64, used to suffer from heart failure and was unable to walk around her house without getting out of breath. However, at 60 she decided she wanted a new lease of life and began to try and lose some weight.

She struggled until she found Slimming World in October 2021–and by June 2022 she had lost 63 pounds. Now, she’s halved her dress size and says she’s never been happier.

Neilson said: “I’m 64 and I’ve been overweight for most of my adult life. I never thought I could lose weight and be slim and happy. In 2018 when I got on my doctors scales, I weighed more than the scales could take–so now I weighed more than 25 stone [350 pounds].

“It’s like I’ve lost forty years and I’m young again, I can walk and join in with things and life is completely different. Joining Slimming World meant it just clicked and it changed my life completely. Even if you don’t succeed the first time, keep going back and trying again.”

The retired head of business improvement, from Dumfries, a market town located in Scotland, in the U.K., was diagnosed with heart failure in 2018. She was finding it difficult to even walk around the house and says the diagnosis came as a shock but it acted as a “lightbulb moment” for her.

“In 2018 I was really seriously ill, I wasn’t far off being dead really. I had heart failure but I didn’t realize and I was really shocked when I was diagnosed. I couldn’t get my breath and was finding it increasingly difficult to walk around the house. It was like a lightbulb moment–if you don’t do something about this you’re going to be dead,” Nielson recalled.

She began following a calorie-deficient diet, where she ate less food than her body needed to function. However, she struggled to follow the strict regime without any support and after losing some weight she gave up–piling back on 56 pounds.

It wasn’t until a friend invited her to go along to a Slimming World meeting that she realized there was another way to lose the weight. By following Slimming World recipes and regularly attending meetings, she found the weight began to fall away.

“I decided I would try my hardest to lose some weight by trying to count calories on my own. It was really demoralizing doing it at home alone and depriving yourself of the things you really like. A friend of mine said she was going to join Slimming World and before thinking I said I would come too,” Nielson said.

“I didn’t think it would work but, oh my goodness, what a difference. The eating plan means you don’t have to deprive yourself of what you really want to eat.

“The friendships and support from the group were amazing and it worked–after the first week I lost 5 pounds and every week after that I kept losing one to two pounds. Before I knew it I’d lost four stone [56 pounds] and my Body Mass Index was below thirty,” she said.

In the United Kingdom, a unit of measurement known as a “stone” is equal to 14 pounds and frequently used to measure body weight.

Previously, in an average day she would skip breakfast and have a bacon roll at 11 a.m. from her work cafeteria, followed by another work-day meal of a sandwich, fries, and sometimes a pie for lunch. For dinner she would have a big meal cooked with fatty and creamy sauces alongside glasses of wine.

Now, she has a breakfast of fruit and yogurt, a chicken salad for lunch, and Slimming World recipes for dinner: including chicken curry, lasagne, spaghetti bolognese, or macaroni and cheese. She also quit drinking, as wine is high in calories and Neilson says she would prefer to eat good food instead.

“My heart failure has gone from being severe to moderate and I’m only just in the heart failure range now–my health has improved so much. It’s taken me four years altogether but as soon as I found the thing that worked for me it just dropped off,” Nielson said.