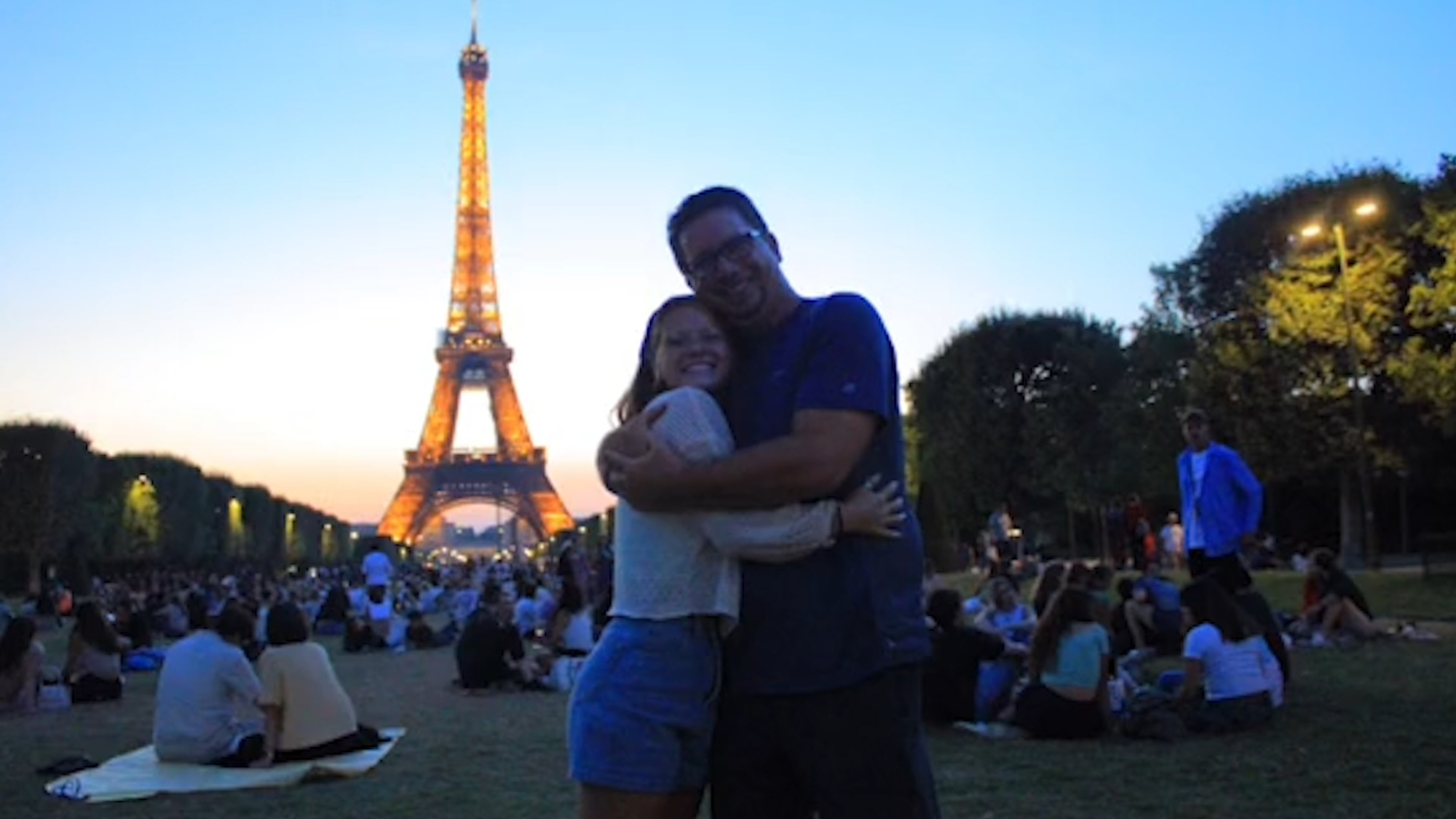 Emma Johnston, 19, and her dad, Mark Johnston, 48, on vacation in Paris, France, in July, 2022. The girl says she wanted the best possible vacation pictures and made her dad test-shoot all her Paris snaps to ensure the angles and lighting were on point, turning him into an unlikely 'dadfluencer'. (Emma Johnston,SWNS/Zenger)

A teen made her dad test-shoot all her Paris snaps to ensure the angles and lighting were on point–and turned him into an unlikely ‘dadfluencer’.

Emma Johnston, 19, and her dad, Mark Johnston, 48, went on a week-long ‘trip of a lifetime’ in July and wanted the best possible vacation pictures. Armed with a tripod, a professional camera and a creative vision, the dad and daughter duo took to the city’s streets to get model-worthy photos.

The young fashionista took inspiration from a TikTok trend–where women make boyfriends test-run their photo-shoots–but decided to use her dad instead. She had her dad pose in front of the Eiffel tower, Notre Dame and the Louvre, and then got him to recreate the photos from behind the camera.

The girl shared a funny montage to TikTok and quickly racked up 562,400 likes with strangers calling for her dad to set up his own social media accounts. She bought her grandad, Richard Johnston, 82, along for the adventure too.

Whilst in Paris, the girl met her great aunt, Jeanie, 86, who lives in Paris, for the first time.

Young Ms. Johnston, a journalism student, from Knoxville, Tennessee, U.S., said: “My dad is the best dad in the entire world, and we had so much fun messing around and making memories. It was the first time I had ever been to Paris, and I was blown away by the beauty of the city.

“Dad didn’t mind posing in front of the camera–he was a natural. Taking the pictures of him helped him then take the same ones of me. I didn’t expect the reaction he’s got–people love him. I’ve had so many messages asking for him to set up an Instagram account–for now he only uses the one for his cabinet-making business.”

Mr. Johnston added: “My hope was to create memories for my daughter and I. Being the reference for all her photos was a way for me to help her have an incredible trip. I wish every dad could have a trip like this with their daughter. The video does not scratch the surface of the meaning of the trip to me.”

The father-daughter duo posed up a storm in Paris–taking snaps at a cobblestone side street in Montmartre, Luxembourg palace, the Eiffel tower, a bridge in front of the Notre Dame, the Louvre and Rue Crémieux. Crossing off all the must-see attractions, the family also visited the Musée d’Orsay and Versailles.

After a week-long city break, the family racked up thousands of steps and Ms. Johnston said: “Honestly my knee was giving up and my feet hurt terribly but we wanted to explore the entire city.”

Her boyfriend, Macrea Love, 25, bought her a professional camera to take photos to accompany her blog posts and she has been working to improve her photography ever since. Mr. Johnston–who owns a cabinet building business–had visited Paris many times and surprised her with a trip to Luxembourg Palace.

“He didn’t tell me where we were going and pointed towards the beautiful building–ever since I was a little girl, I have always loved castles,” she said.

The girl used to be camera shy but became interested in fashion a year ago and decided to start a fashion blog. With no background in fashion or photography, her dad is now quite the model.

“I actually don’t like taking photos in front of other people but my dad was loving it. He didn’t mind at all, he said ‘just tell me what to do and I’ll do it’. We had an amazing trip and I’m so happy we have photos to treasure the memories forever.” – she said.

«Previous Post
Moscow Holds Large-Scale Military Exercise With Other Powers Including India, China And Belarus»Next Post
Most Americans Have A ‘Seize The Day’ Mentality, According To New Study