That Time A ‘Pacifist’ Cat Brought A Mouse Friend To Dinner

The owner said: “We all had a good laugh about it. It was like a real-life Tom and Jerry cartoon."
By Simona Kitanovska August 31, 2022
Facebook
Twitter
Linkedin
Email 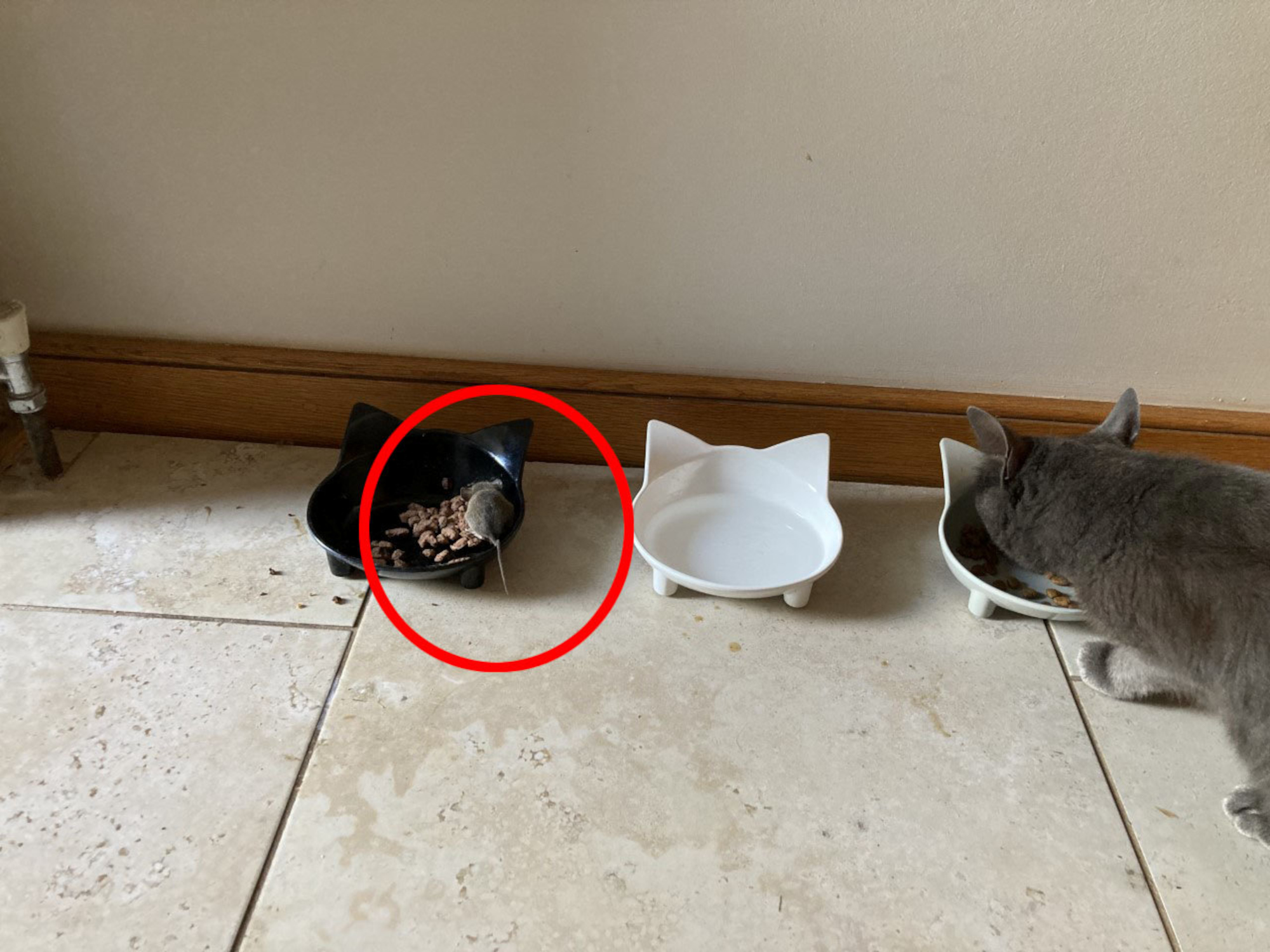 Misty the cat and the mouse it brought home to dinner, in Thornbury, England, pictured in an undated photo. The peace-loving grey kitty was spotted dining out with her rodent companion, leaving her owner to brand the pair the real-life “Tom and Jerry”.(Jon Mills, SWNS/Zenger)

This hilarious photo shows the moment a “pacifist” cat brought home a friendly mouse to eat with her from a food bowl.

The peace-loving grey kitty, named Misty, was spotted dining out with her rodent companion, leaving her owner to brand the pair the real-life “Tom and Jerry”. Misty, who was previously a stray, was welcomed into the family’s home to replace their former “chief mouser,” Molly, after she sadly passed away.

But instead of honing her killer instinct, Misty has made “friends” with the local wildlife and treated her bowls of delicious cat food like a “restaurant” for rodents. And the cat’s owner, who asked not to be named, now believes she could be a “vegan.”

“I used to leave some food out for her, and now she just now comes in and eats the food and brings her ‘friends’ in. Maybe she’s a vegan. She wasn’t hungry enough to eat the mouse, so she might have just thought it was a little someone for her to play with.

“We all had a good laugh about it. It was like a real-life Tom and Jerry cartoon. I’m surprised the mouse wasn’t that frightened either. It wasn’t scurrying away from her,” the owner said.

Misty’s owner, who lives with her husband on a farm in Thornbury, a market town and civil parish located in Gloucestershire county, in England, in the U.K., said she’d adopted the stray cat following the death of their old cat.

“Misty was a little bit of a stray, and she found us. We lost our farm cat, and she suddenly appeared looking a little bit hungry and thin. Now she lives here, and she’s so friendly,” she said.

But Misty hasn’t shown any interest in becoming the farm’s “chief mouser” and is instead happier to spend her time “playing” with her furry companions.

“She just doesn’t seem hungry, so she doesn’t eat them. Maybe when we started giving her food, she thought, “Oh, the mouse might be hungry for some food as well because these people are kind,” the owner explained.

“I don’t think she has it in her to kill them. But the old cat was a chief mouser and a proper farm cat,” she said.

Despite her woeful abilities as a rodent killer, Misty’s owners say they have no plans to get rid of the chilled-out cat.

“Our neighbors think it’s hysterical. They just think it’s really funny, and they’ve all had a good laugh about it. But I wouldn’t bring in another one. We have four farm cats next door, and they’re very capable,” the owner said.