The folding chair was made from iron and is extremely rare, being only the second such medieval piece to be found in Germany.
By William McGee August 31, 2022
Facebook
Twitter
Linkedin
Email 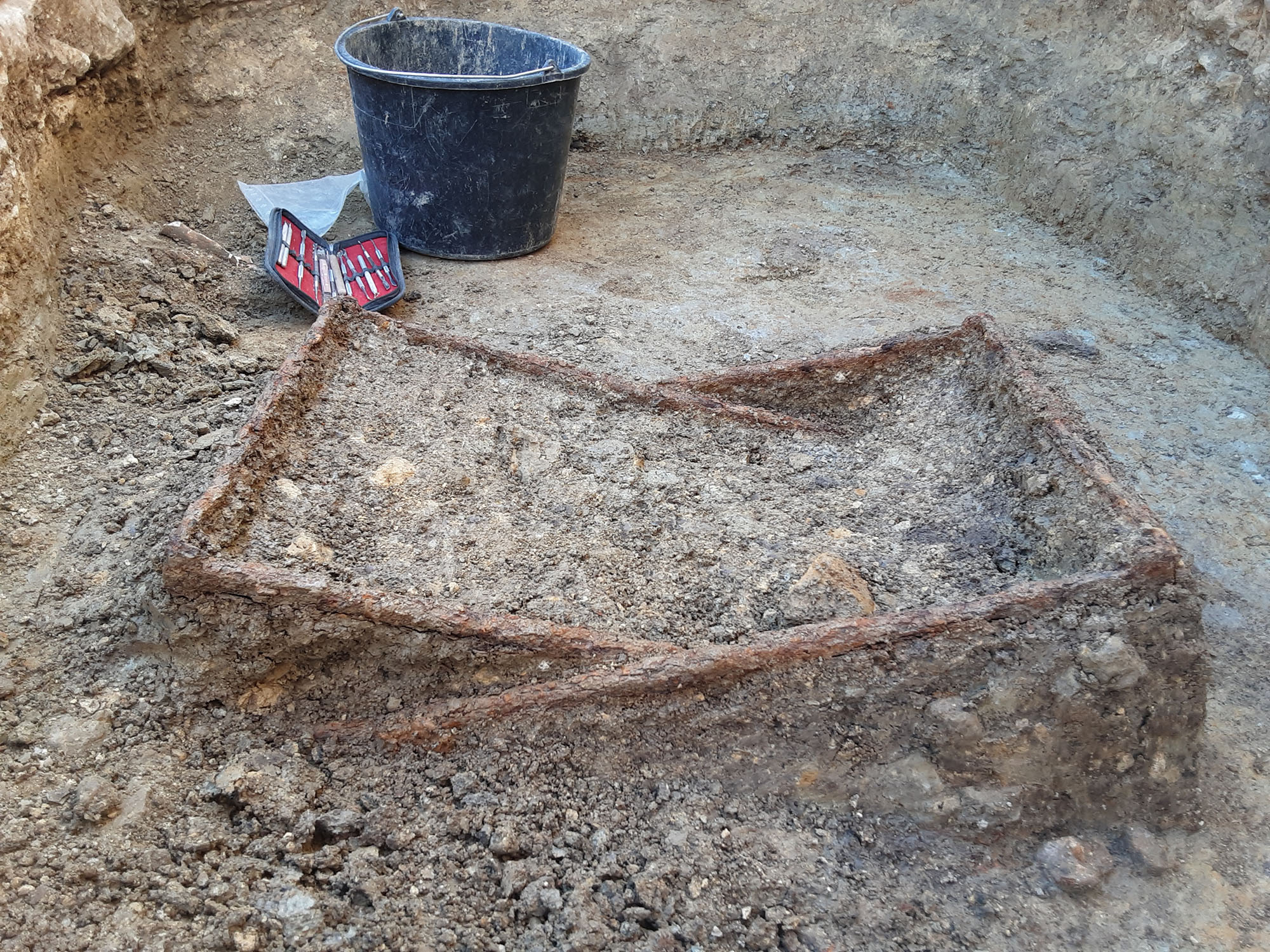 Photo shows the approximately 1400-year-old iron folding chair found by archaeologists laying in a woman's grave in Middle Franconia, Germany, undated photo. The iron folding chair has been underground at a depth of around 6.5 feet ever since. (BLfD/Zenger)

Archaeologists in Germany have unearthed a 1,400-year-old folding chair from an early medieval woman’s grave.

The surprise find was made in Endsee, Bavaria, in south-eastern Germany, earlier this month. The folding chair was made from iron and is extremely rare, being only the second such piece dating from the early Middle Ages to be found in Germany.

When folded, the chair measures around 28 by 18 inches and is believed to date from the end of the 6th century. The experts believe that the chair was buried with the deceased woman–who likely passed away in her 40s–as a grave good.

In a statement obtained by Zenger News on August 29, the Bavarian State Office for Monument Protection (BLfD) said: “About two meters [6.5 feet] below ground level, an excavation team in Endsee in central Franconia uncovered a grave measuring around 1.3 by 2.7 meters [4.26 by 8.85 feet], in which there was an iron frame that soon turned out to be a folding chair.”

“When folded, the folding chair is about 70 by 45 centimeters [27.55 by 17.71 inches] and dates from around 600,” the statement continued. “It is the second find of an iron folding chair from the early Middle Ages in Germany!

“This find, which at first glance seems so modern, is an absolute rarity and of the greatest cultural-historical interest, because it gives an insight into the burial equipment of prominent sections of the population and into the early use of furniture,” said Mathias Pfeil, BLfD Curator General.

The BLfD said: “The scientific excavation, which was professionally supervised by the Bavarian State Office for the Preservation of Monuments, took place in the course of construction work in the Rothenburg-Endsee industrial park.

“The folding chair was found as a grave good from a female burial. The deceased, according to the first anthropological assessment, a woman who died at the age of 40-50 years, had a pearl necklace made of small multicolored glass beads around her neck.

“On her belt was a hanger with, among other things, two bow brooches, an almandine disc brooch, a large millefiori bead and a spindle whorl.

“Next to the folding chair that had been deposited at the feet of the dead lay an animal bone, probably a rib from a cow as part of a meat offering. Remains of wooden paneling suggest a closed burial chamber. Next to the woman’s grave, the archaeologists uncovered a man’s grave, which was in an almost parallel arrangement and west-east alignment.

“The deceased was given a full set of weapons (lance, shield, spade) and a leg comb in addition to his waist belt with bronze buckle and belt pouch. Restorers are now examining the folding chair, which was recovered as a block, in the restoration workshops of the Bavarian State Office for the Preservation of Monuments near Bamberg and will gradually uncover it.

“X-rays are expected to reveal the condition of the stool, so decorations could be revealed. Grave goods like this folding chair are extremely rare. They are interpreted in research as ‘special gifts’ and suggest that the deceased had held a higher office or had been of higher social rank.

“So far, 29 sites of early medieval graves with folding chairs have survived across Europe, only six of them made of iron. The chairs mostly appear in women’s graves. Most specimens only have individual parts such as nails or axes, because they were often made of organic material such as wood or ivory, as well as leather or fabric, which are long gone,” said the statement from the BLfD.

“For a long time, these finds were misinterpreted as skewers or robber hooks and not as relics of folding chairs. Iron and bronze folding chairs have been made since Roman antiquity. In its function as a sella curulis, the folding chair became one of the most important symbols of office in society and embodied characteristics such as authority, power and dignity,” the BLfD added.