Pink cocaine is a name for the synthetic psychedelic drug 2C-B and the seizure is the largest of this drug in Spain to date.
By William McGee August 31, 2022
Facebook
Twitter
Linkedin
Email 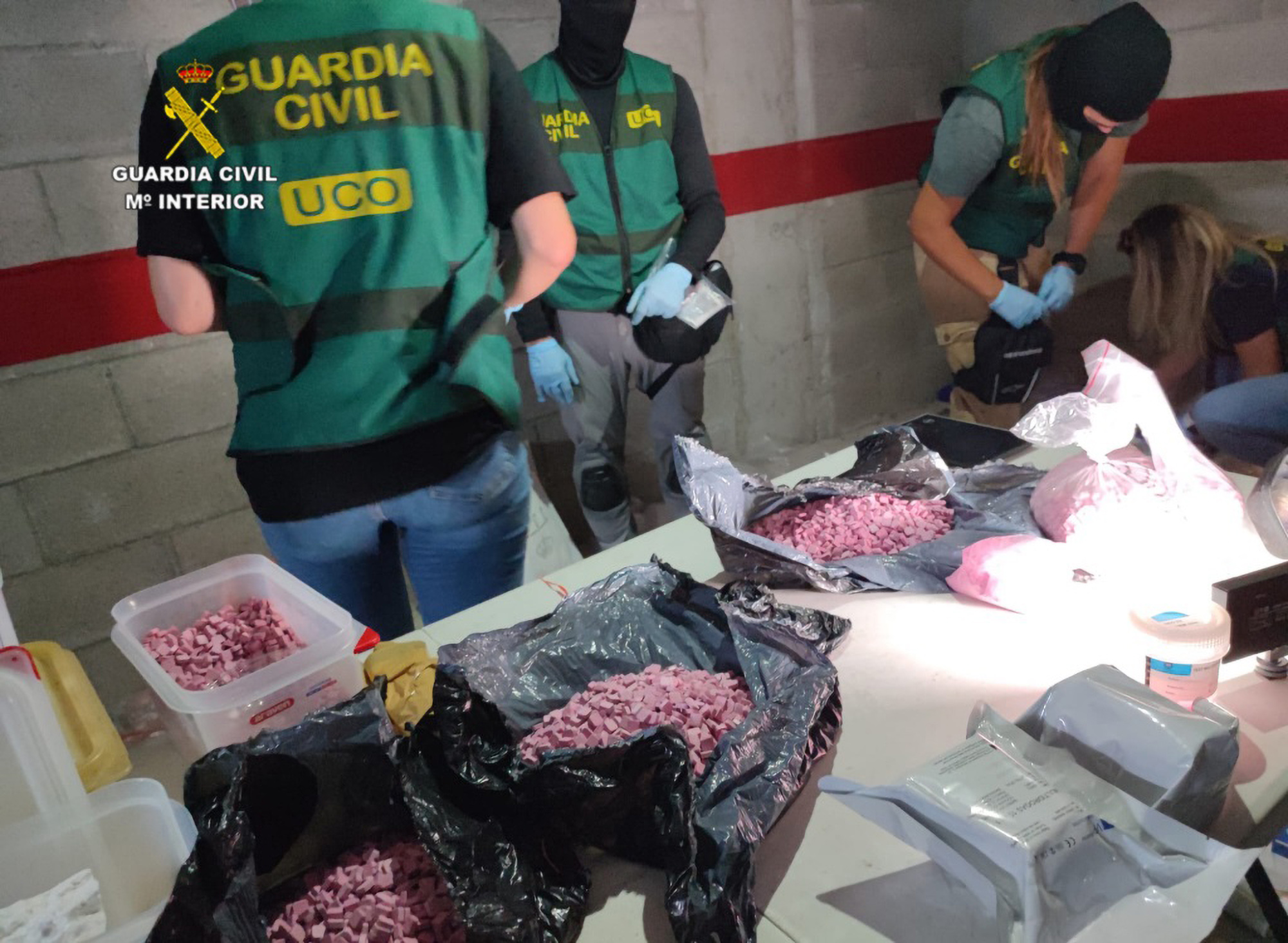 Photo shows the pink cocaine seized by police, undated. It was the largest amount of pink cocaine ever seized in Spain. (Zenger)

Police in Spain have busted a largely British gang with 28 pounds of pink cocaine, half a million dollars in cash, and firearms including a submachine gun.

The mega bust took place across 12 properties on the party island of Ibiza on August 29, with 12 people arrested so far. The suspects are accused of crimes against public health, illicit possession of firearms and belonging to a criminal organization.

Meanwhile, cops in Colombia arrested two alleged members of the gang after they arrived in the country apparently to negotiate with drug producers. Along with the alleged gang members, police in Spain seized 13.25 kilograms (28 pounds) of pink cocaine.

Pink cocaine is a name for the synthetic psychedelic drug 2C-B and the seizure is the largest of this drug in Spain to date.

The raids were planned in cooperation with the U.K.’s National Crime Agency and Interpol. Most of the arrested suspects are of British origin, but police did not reveal their identities.

In a statement obtained by Zenger News on August 30, the Spanish Civil Guard said: “The Civil Guard, within the framework of the VIA FORA operation, developed by the UCO [Central Operative Unit] Group of Teams Against Organized Crime in collaboration with EUROPOL, the British NCA, and the OCN-INTERPOL [Interpol National Headquarters] of the DIJIN (Directorate of Criminal Investigation and Interpol) of the National Police of the Republic of Colombia, has dismantled an international criminal organization based on the island of Ibiza dedicated to the production, importation and distribution of narcotic substances.

“Yesterday, the Civil Guard carried out 12 house searches in the localities of Sant Josep de Sa Talaia, Sant Antoni de Portmany, Es Cubells and Ibiza, which resulted in the arrests so far of a total of 12 people, who are being investigated for crimes against public health, illicit possession of firearms and belonging to a criminal organization.

“In a coordinated manner, members of the National Police of the Republic of Colombia proceeded to arrest two other components of the criminal organization who had recently traveled to Colombia to negotiate the acquisition of large amounts of cocaine.

“Likewise, three short firearms and one submachine gun with a silencer were seized, all of them of illicit origin, which would confirm the extremely violent nature of the now dismantled criminal organization, as they would be used to guarantee the collection of drugs distributed to other organizations, as well as to carry out ‘vuelcos’ (thefts of drug shipments from other organizations).

“On the other hand, 11 vehicles owned by members of the criminal organization, a large number of mobile phones, computers and documentation relevant to the investigation have been seized.

“Due to the extreme dangerousness of some of the components of the now dismantled criminal structure, these actions have had the support of the UEI (Special Intervention Unit) and the GAR (Rapid Action Group), in addition to the GRS 2 [Reserve and Security Group] and the USECIC [a rapid-response unit of the Civil Guard] of the Balearic Islands.

“The Civil Guard has also had the support of EUROPOL, the British NCA, and the collaboration of Dutch, Irish and German authorities.”