Woman’s Dog Saved Her Life By Sniffing Out Her Cancer

"At first, I thought it was him wanting a bit of fuss and attention but I decided that I should perhaps take notice."
By Simona Kitanovska August 30, 2022
Facebook
Twitter
Linkedin
Email 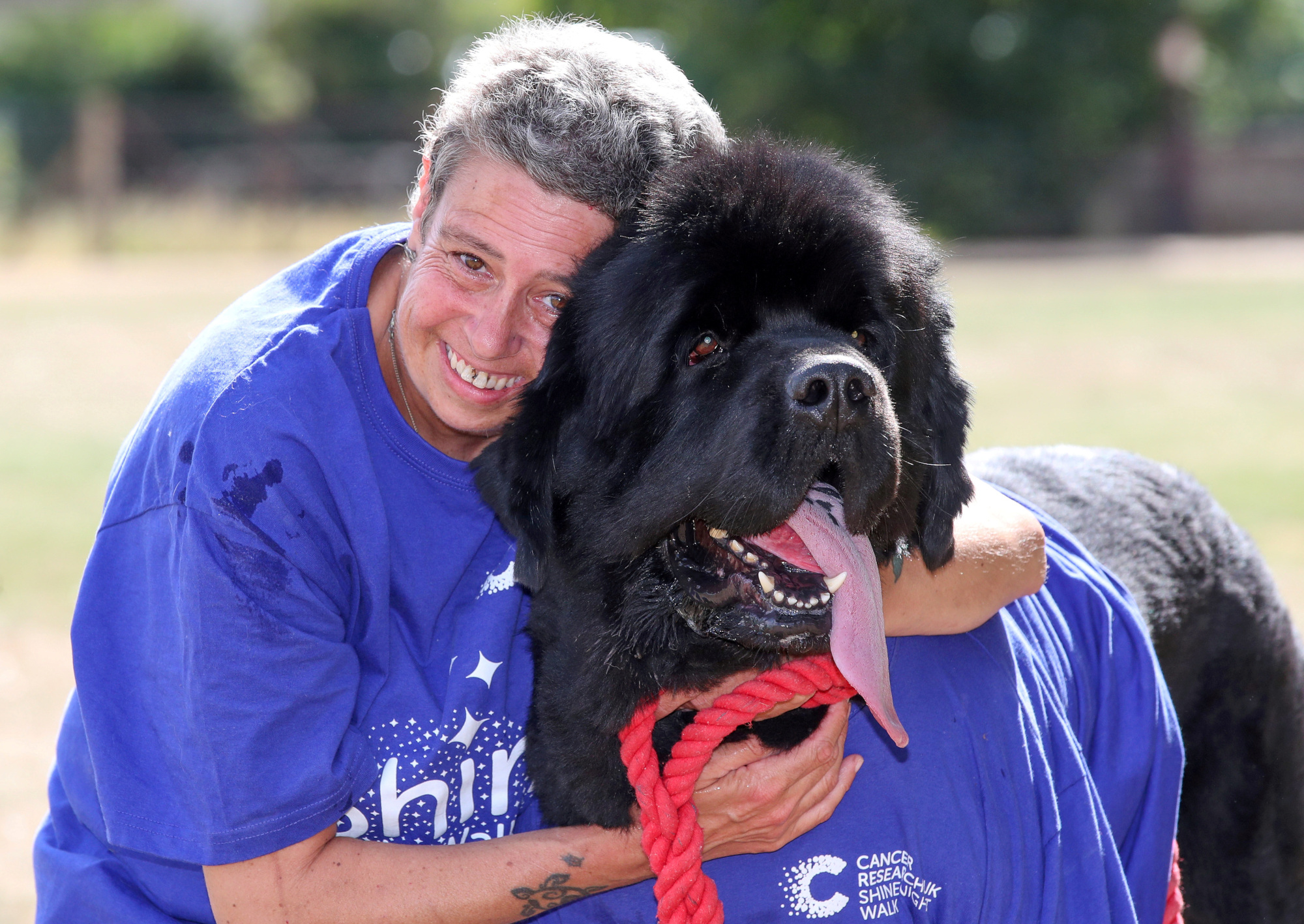 Lucy Giles, 45, and her dog Brody pose in undated photo. Brody a rescue dog who was able to save Lucy from her breast cancer after “sniffing and nuzzling” her right armpit. (Stuart Martin,CRUK,SWNS/Zenger)

A woman said she owes her life to a rescue dog who spotted her breast cancer after “sniffing and nuzzling” her right armpit.

Lucy Giles, 45, thought her beloved Brody was initially just craving some attention but swiftly after discovering a lump in her armpit she was diagnosed with Her2+breast cancer. The animal-lover had welcomed the 150-pound Newfoundland giant into her life in July 2021 after her partner Ashley, 62, had spent six months in the hospital on a life-support machine after contracting COVID.

When Ashley returned home he was dependent on Giles, who works as a carer, and she became his full-time support. As part of his recovery, the pair decided to add to the family of pets who they dote on, including two dogs Leo and Murphy, 18 rabbits, two cats and a tortoise.

They then adopted Brody the gentle giant, who was from a family who could no longer look after him, and the Newfoundland breed is well-known for water rescue and lifesaving because of their swimming abilities and intelligence.

Giles, of Didcot, a railway town located in England, in the U.K., said: “It was in September that he started to sniff and nuzzle at my right armpit. It was mostly when I was sat down, so either watching TV or sitting down for a rest and always in the same spot on my right side.

“At first, I thought it was him wanting a bit of fuss and attention but I decided that I should perhaps take notice as it was just my right side he would do this. I was washing myself in the shower one morning and decided to have a feel under my breasts and examine myself and that’s when I felt a lump right there in my armpit.”

Giles was then informed to wait a month by her GP surgery as her doctor thought it could be hormone related, but the lump remained a few weeks later, and she was referred to Churchill Hospital for tests.

She explained: “The hospital called me one afternoon and asked me to come in and I had no idea what the news would be as they wouldn’t tell me over the phone. The consultant said straight away that I had Hert 2+breast cancer and there was also residual cancer cells in my lymph nodes. The news hit me hard as it was the same day my nan had died from bowel cancer the year previously and I was with her when she died.”

She is still going through chemotherapy as well as continuing to work full time. Giles added: “I have had dark days and OK days.

“The chemo does make me feel poorly with mouth ulcers and some nose bleeds but I have a brilliant support network of family and friends who take me to appointments and help in just being there for me, along with Broady of course who perhaps came into our lives for a reason.”

Giles is hoping to encourage others to join her in Oxford on Saturday, 3 September for this year’s Cancer Research U.K. Shine Night Walk, a 6-mile stroll to raise money for life-saving research.

Alison Birkett, from Cancer Research U.K., said: “One in two of us will get cancer in our lifetime, but all of us can help beat it. As we mark our anniversary, we want to thank Lucy, Ashley and of course Broady and people across Oxfordshire for their incredible commitment to events like Shine Night Walk that make our life-saving work possible.”