Woman Turns One-Star Reviews Of Her Hometown Into Hilarious Artwork

Poor Tripadvisor reviews complain about seagulls being noisy, hills that are too steep or roads too narrow.
By Simona Kitanovska August 30, 2022
Facebook
Twitter
Linkedin
Email 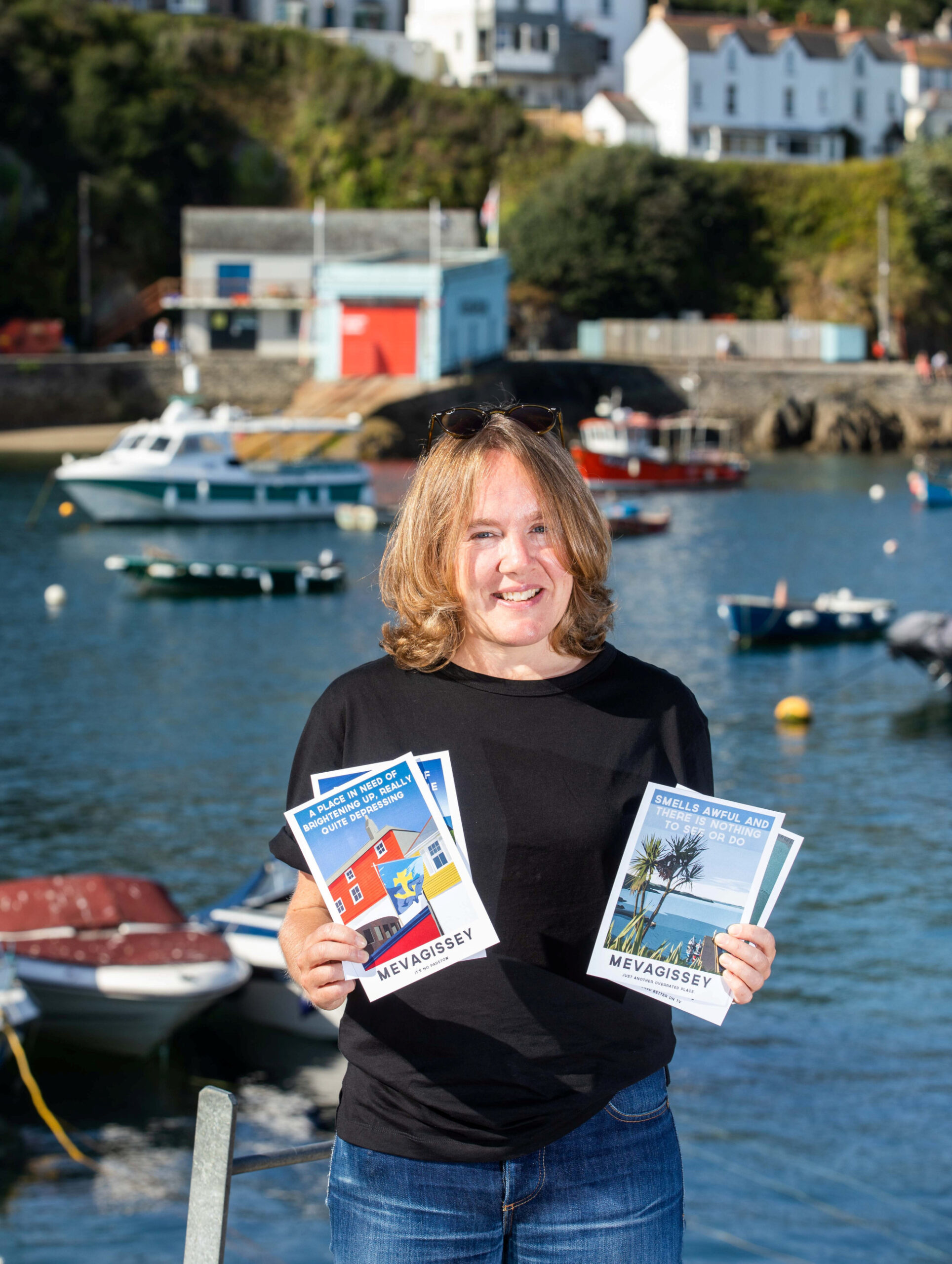 Sally Mitchell from Mevagissey, Cornwall, in the U.K. poses in an undated photo. Mitchell has turned negative reviews about her home county into art. (SWNS/Zenger)

A woman has turned hilarious one-star Tripadvisor reviews about the famous fishing village where she lives–into artwork.

Sally Mitchell was left baffled when she came across awful online comments about the U.K. harbor village of Mevagissey–including people moaning about the sun being too bright. It is one of England’s Cornwall most beautiful destinations attracting thousands of tourists every summer–but not everyone has enjoyed their time there.

Poor Tripadvisor reviews complain about seagulls being noisy, hills that are too steep or roads too narrow. Others have posted comments like ‘not as nice as we hoped’ and ‘unless you are a fan of lighthouses don’t bother’.

Mitchell decided to turn the negativity into a light-hearted venture and create some crafty art out of the ordeal. She has deemed her new collection ‘An Overrated Place’ and encourages customers to “order now for guaranteed disappointment.”

Mitchell said: “I had time on my hands and managed to get myself into this mischief. I live just near the harborfront, and it’s a very beautiful place to live–so when I saw these one-star reviews, I thought there seemed to be a bit of disconnect with peoples’ experiences and how I find this place as my home.”

One user posted Mevagissey is ‘a place in need of brighten up, really quite depressing’ while another thought the historic fishing port ‘smells awful and there is nothing to see or do’.

Mitchell explained she was initially annoyed by the comments, but swiftly became amused by the “petty” words–mainly because they are mostly observations that are outside of anyone’s control. She said: “It actually made me chuckle because they are so stupid.

“It’s just bizarre because it’s things like the seagulls are too noisy, or the hills are too steep, or the roads are too narrow. Funnily enough when the towns were built they didn’t plan on two-way traffic!”

Having already created a few stunning illustrations of her local area, Mitchell began experimenting with the reviews. She placed the words from the disgruntled tourists over her artwork and said: “It just clicked.”

Some of the comical comments include: “It used to be a charming fishing village but now it is a mess”.

Others read: “We are leaving before it drags us down anymore” and “The seagulls are rampant.”

Now Mitchell says her little venture has taken off in a way she would have never expected and because August is usually a slow month for her anyway, this project has “filled in [her] time quite nicely”.

Ever since sharing her artwork on Twitter on August 1, Sally’s inbox has been filled with “hundreds, if not thousands” of people asking her to produce something on their town. She said: “It’s just one of those silly things that went nuts but the responses have been overwhelmingly positive.

“One of the most popular requests are about the sand being too damp at Perranporth to build sandcastles–I’ve had a lot of requests about Penzance. Looking at Tripadvisor reviews, people seem to find Penzance really boring.”

When describing one of the most bizarre comments the artist has experienced, Mitchell revealed: “A friend of mine mentioned a Tripadvisor review that marked her Airbnb down because the sunshine was too bright. They were facing east, so when the sun came up in the morning, it shone in, and it was too bright apparently.”

Mitchell admits she is not completely sure of the reason behind her artwork’s success, but believes it was a case of “being in the right place at the right time.”

She added: “I shared the artwork on Twitter when Cornwall is at its busiest–and of course it’s silly season. So it was apparently the right moment for it unwittingly; nothing was preplanned at all. At the end of the day, people have said it’s made them laugh–and I think we all need a bit of a laugh at the moment.”