The study also found that 76 percent of those polled believe guests would react positively to having dogs involved at a wedding.
By Simona Kitanovska August 30, 2022
Facebook
Twitter
Linkedin
Email 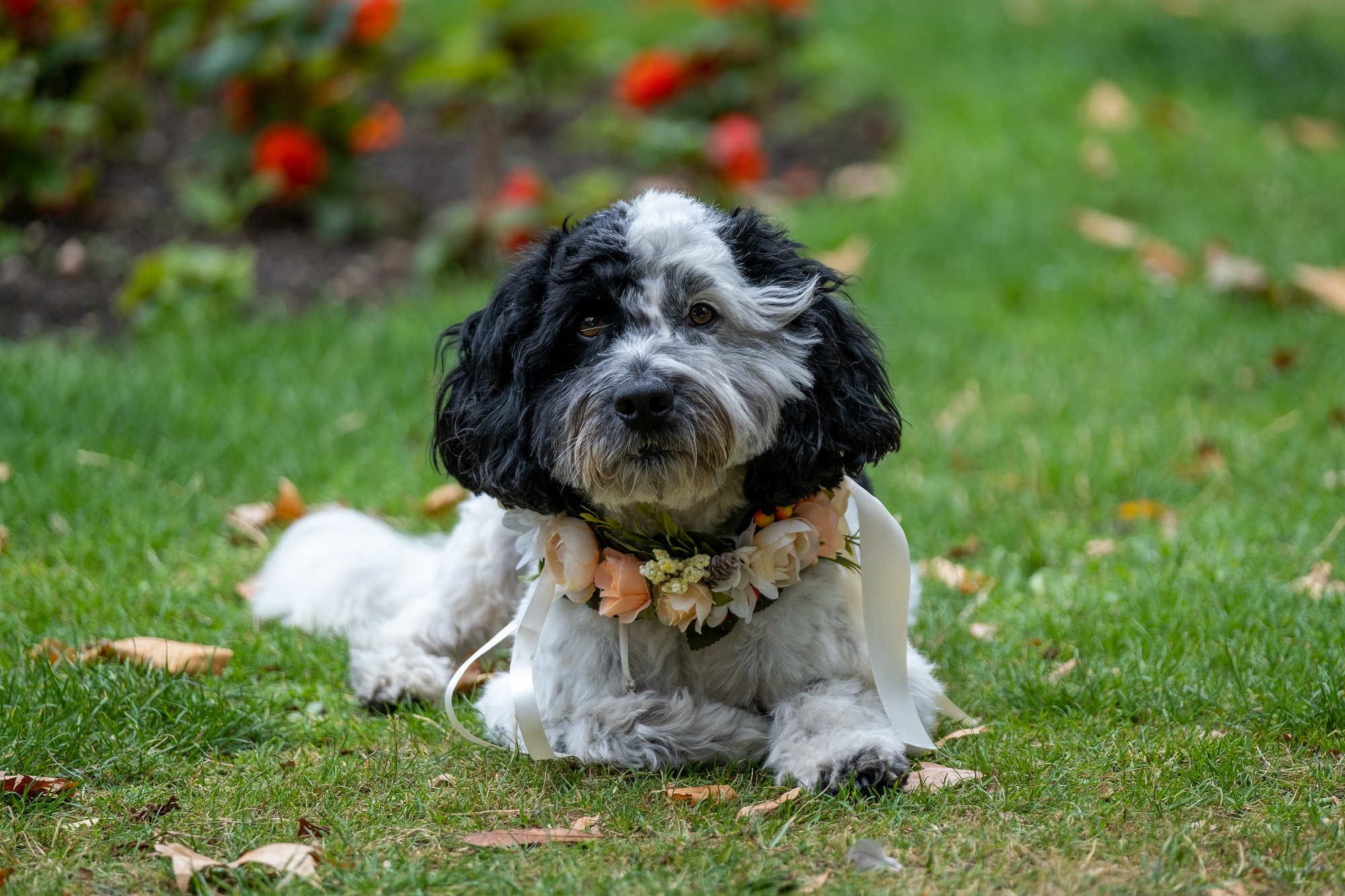 Ollie the cockapoo tries on the Amazon Handmade wedding range, in an undated photo. A survey conducted by OnePoll, commissioned by Amazon Handmade found that two-thirds of dog owners want to get their pet involved in their wedding day. (Jon Mills, SWNS/Zenger)

Nearly two-thirds of people would have their dog involved in their wedding day–with some even willing to have man’s best friend play the role of best ‘man’, bridesmaid or ring bearer.

A recent poll of 2,000 dog owners, commissioned by Amazon Handmade and conducted by OnePoll, found that 60 percent already knew someone who had their dog at their wedding. The most popular roles for dogs on the big day were as ring bearer–50 percent, flower girl–17 percent, and page boy–13 percent.

And nine percent would even have their dog as their best man. It also emerged that couples would be prepared to spend an average of £64.21 to get their pooches ready for the nuptials.

Xavier Flamand, of Amazon Handmade, which has launched its new wedding store, said: “This research reflects the growing trend of newlyweds wanting to involve pets in their big day. Whether it’s to walk them down the aisle or to be a ringbearer, there are unique items for brides, grooms, the bridal party, guests–and now for furry friends too.”

The study also found that 76 percent of those polled believe guests would react positively to having dogs involved at a wedding. A whopping 93 percent feel that because a dog is part of the family, pets should be involved at the wedding.

And 70 percent would ask if a venue was dog-friendly when scoping out possible locations for the big day. It seems dogs wouldn’t be going hungry after the ceremony either, as 68 percent would get a special dish cooked up for their pet to enjoy at the wedding breakfast–the first meal enjoyed by the couple and guests after tying the knot.

Alexandra Moston, who had her labrador Hugo by her side on her special day last year, said: “Hugo is such an important part of the family, so it was only natural for us to make sure he was a part of our day. We wanted Hugo’s presence as ‘Best Dog’ and ring bearer to be a surprise for all our guests, so we only told the best men and vicar!

“We got the best man to pretend he had forgotten the rings, but then Hugo came bounding down the aisle. It was an amazing moment and to be able to have him there and make everyone smile.

“He joined us for some pictures that afternoon–it was definitely the most dressed-up walk we’ve done. He also treated our guests to some dog biscuits for their four-legged friends to take home.”

When deciding what their dog will wear for the special occasion, a special collar with a ring box on it (46 percent) was the most popular choice, according to the study.

This was closely followed by a custom suit–42 percent, bow tie–39 percent, floral collar–26 percent, and a custom dress–21 percent, as other possible outfit options.

Celebrity wedding planner Mark Niemierko, who has helped style the weddings for the likes of James Corden and Rochelle Humes, said: “I hired corgis for a wedding recently and it was a brilliant addition. It really calmed guests down and I’ll definitely be doing it again.”