"My family wasn't too well off in those days and I spent hours searching for it on the rows we had been."
By Simona Kitanovska August 30, 2022
Facebook
Twitter
Linkedin
Email 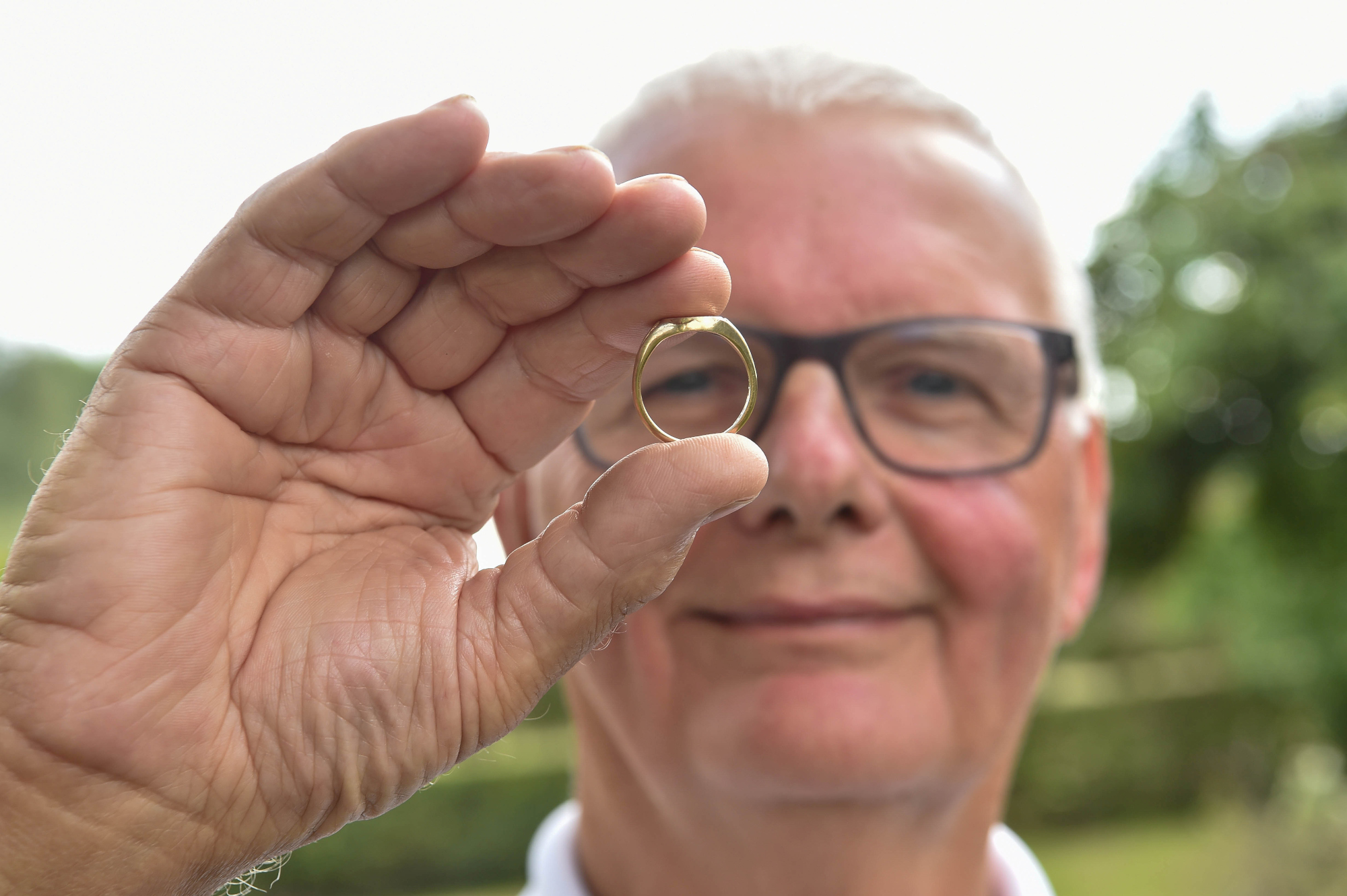 Dave Radley poses with the ring he found nearly 50 years ago in an undated photo. Radley, from Mountsorrel, in the U.K., who had lost his gold signet ring picking strawberries in 1968, had it returned after a metal detectorist managed to find it 54 years later. (Emma Trimble, SWNS/Zenger)

A man has been reunited with a ring he lost while picking fruit, over 50 years ago.

Dave Radley, 75, was distraught when the gold signet ring slipped off his finger as he picked strawberries in 1968. It was gifted by his late mother for his 21st birthday, and the retired train engineer spent hours trying to find it.

But in a stroke of luck last month a metal detectorist who received a tip-off from the landowner about the lost item made the discovery.

Radley, of Mountsorrel, a village located in Leicestershire county, in the U.K., said: “The ring might not have changed but its owner has–so it’s a fairly tight fit. I’ve had to have it changed slightly as I can just about get it on. But none of that matters because I’m so grateful to have it back”.

Radley says the 9-carat ring would have been an expensive gift at the time of its purchase and his mother would have likely bought it via a catalog and paid over a period of time. He turned 21 in May 1968 and received the ring as a special birthday present–but lost it just weeks later.

His family lived in Seagrave, Leicestershire, England, at the time where Radley picked strawberries with his friend Mick Lovett to sell to local shops. He was picking strawberries in the field behind Lovett’s dad’s house ready to sell that morning when he suddenly realized the ring was no longer on his finger.

Fast forward 54 years and Radley got a call from Lovett’s younger brother Peter–who still owns the land–and told him that a metal detectorist had knocked on his door. The metal detectorist was working for Lovett’s brother and asked if he could detect in the very same field–to which the brother agreed and informed him about the missing ring.

And after searching around the same area Radley lost it, he came back with the ring in hand. It was found seven inches deep in the ground with only one slight scratch, ready to be polished out–and Radley went to collect it from Seagrave later that week.

Radley said: “My family wasn’t too well off in those days and I spent hours searching for it on the rows we had been. My mother wasn’t upset with me, just more upset because of how distraught I was.

“When I got the call from Peter I couldn’t quite believe it–the joy I felt in that moment is indescribable. The crazy thing is, Peter still owns the land, otherwise none of this would have ever happened.

“I took it to the jewelers who valued it at around £700 which shows just how much it was worth back in those days. I’ve had it expanded as it’s a bit tight now, but 54 years later I can happily say it’s finally back safe on my finger–I’m so thankful.”