The parents were not able to find a suitable donor in Japan, so they are now appealing internationally.
By Simona Kitanovska August 30, 2022
Facebook
Twitter
Linkedin
Email 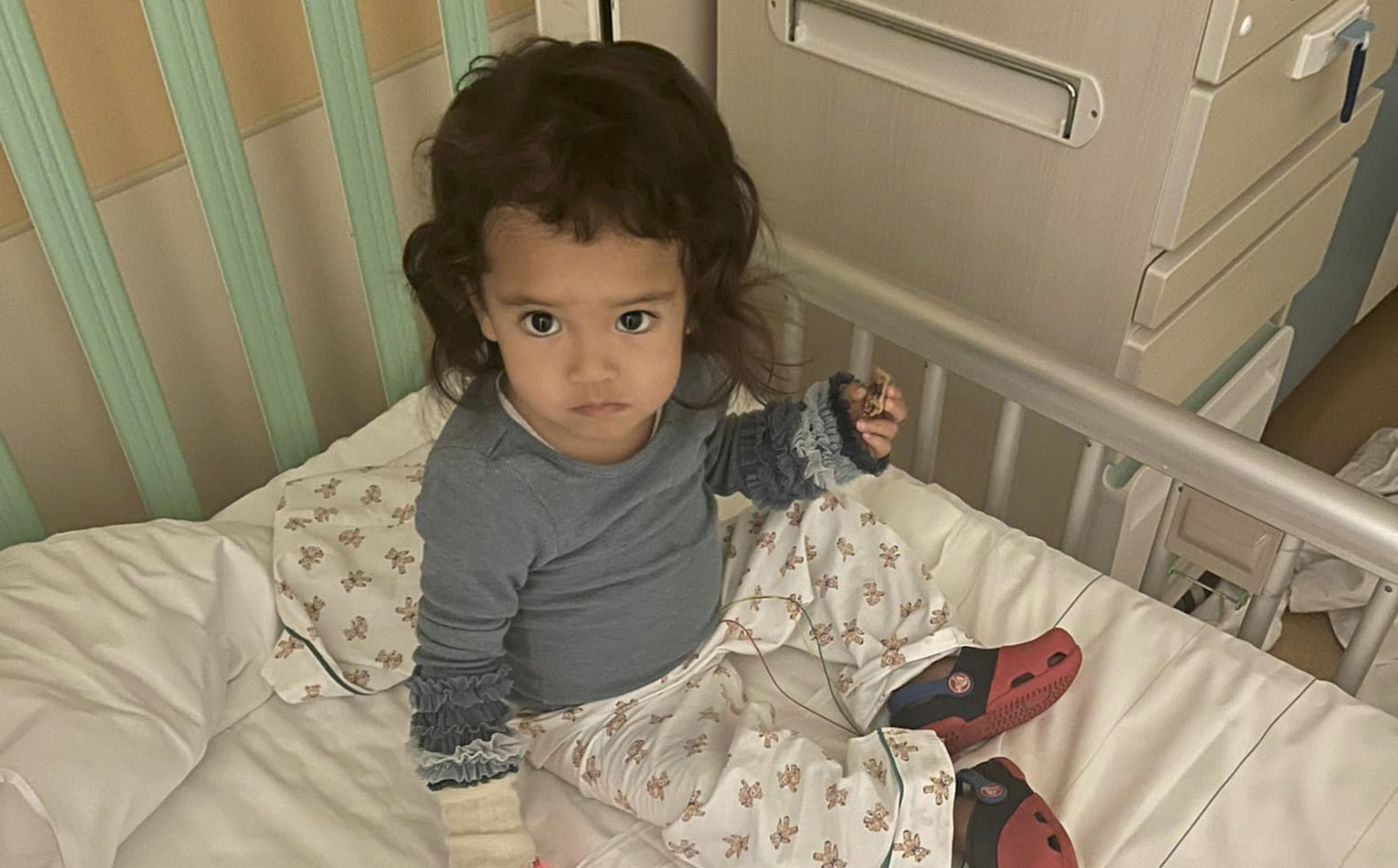 Flaminia Pugliese,2, a two-year-old child suffering from rare leukemia, poses in an undated photo. Her parents have launched a crowdfunding campaign to raise £40,000 to find a suitable donor for the little girl. (Thomas Pugliese,SWNS/Zenger)

The Italian dad and Japanese mom of a two-year-old with a rare kind of leukemia have launched a crowdfunding campaign to find a special donor matching their child’s genetic makeup.

Two-year-old Flaminia Pugliese has been in Nanbu Children’s Hospital in Okinawa, Japan, since January 14. She was diagnosed with a rare form of cancer called Myeloid Leukemia AML (Acute Myeloid Leukemia) M7.

The young girl received several courses of chemotherapy but is now in need of a bone marrow transplant. Dad Thomas Pugliese is Italian and mom Naraha Pugliese is Japanese, which means that her donor needs to have similar genetics.

The parents were not able to find a suitable donor in Japan, so they are now appealing internationally, which will cost around £40,000. The couple have launched a crowdfunding campaign with a target of £18,500, which is around half the funds needed after doctors first wrongly estimated the cost.

The NHS describes this type of leukemia as “rare” with only 3,100 people being diagnosed each year in the U.K., while Cancer.net states it makes up around 1 percent of cancers.

Her dad, Mr. Pugliese, said: “The first verdict we had was already terrible, for us, because they told us she had only a 60-percent chance of survival in five years. So the treatment for her would have been five stages of chemotherapy, which are called two stages of ‘attack therapy’, where medicine basically destroyed all the bad and good cells in your bone marrow, with a very strong dose of a cocktail of medicines.

“After that, she would have to go through other three stages of chemotherapy called consolidation therapy for a total of six months. So she started at the end of January with the first stage of chemotherapy, and medicines actually worked pretty well.”

While in the hospital, the young girl’s immune system was severely compromised after contracting various infections. She contracted an unknown infection in her jaw’s parotid glands after being exposed to a room full of other infant patients.

“She was not allowed to a private room, so she was always in a big room with other kids and also adults. Because of that, she had her first infection on her parotid region, that affected the hall left side area of her jaw,” Mr. Pugliese continued.

It was later confirmed that she suffered from a Mycobacteria infection, which is similar to tuberculosis.

“She suffered tremendous fevers for a couple of months until finally they could understand and isolate the bacteria. They didn’t know for two or three months what kind of bacteria that was, so she could still go through the other two stages of chemotherapy,” Mr. Pugliese said.

Once the infection was treated, she continued her chemotherapy, but soon contracted fungemia in her bloodstream.

“This type of fungus is really rare and it’s called Trichosporon and the fatality rate was terrible, around 80 percent. Fortunately at the time the same doctor who found out the mycobacteria understood immediately what was going on and could tackle the infection in a good timing saving her life,” Mr. Pugliese said.

Due to the infections she contracted, the girl’s chemotherapy was delayed and she now has to do a bone marrow transplant.

Mr. Pugliese said: “The therapeutic window basically closed down and so they told me that she had to go through bone marrow transplantation to be able to eradicate her cancer.”

For the bone marrow transplant to achieve the best results, the potential donor and the girl have to hold similar genetics.

“Because she is half Caucasian and half Japanese we couldn’t find a match here in Japan. So we asked the bone marrow bank to search for a match internationally but in order to do that they asked us around £40,000 or ¥6,000,000 for the treatment.

“So the beginning was kind of unclear because the only thing they told me was that it will be difficult to find a donor because she’s a half Italian and half Japanese. But after this, I have done some research and found that anybody can be a donor basically the best match or the easier match would, of course, be somebody like her or at least half Caucasian and half Japanese,” Mr. Pugliese explained.

Her parents have struggled throughout the process of having to take care of the girl and it has taken its toll.

“When they diagnose your daughter with such a terrible illness, I just hit you like a hammer and brings you crashing down so deep that you wouldn’t even think such sadness could ever be possible. But then again slowly you kind of regain faith, and hope and so you just suck it up, as much as you can, and try to do the best you can to make this journey, for her, as decent as possible. You try to keep her busy and keep on smiling as much as you can without showing any weakness to her&mldr;. because at the end of the day mom and dad are her rock,” Mr. Pugliese said.

Doctors have made no specific predictions of the girl’s future making her parents’ appeal for a donor even more desperate. So far, their fundraising efforts have garnered ¥2,316,773 (£14,324) with a deadline of October 15. Once the full amount has been raised the search for an international donor will begin, hopefully finding a match for the girl.