His son said: “He was passionate about his lifestyle and the farm he lived and worked on. ”
By Simona Kitanovska August 30, 2022
Facebook
Twitter
Linkedin
Email 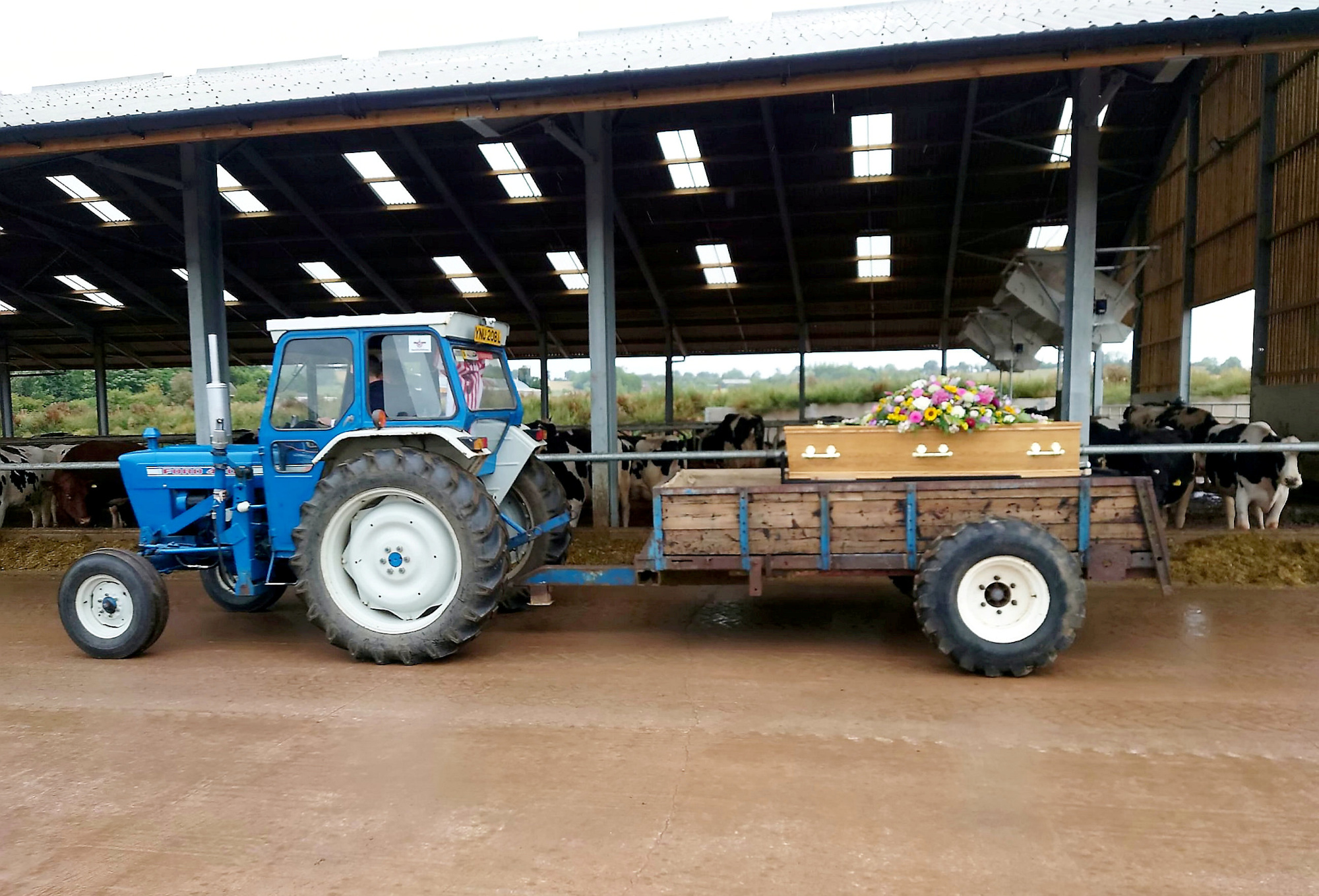 The coffin of farmer George Brookes being taken on a ride on a tractor 'so he could see his cows for one last time' on August 17, 2022. His family paid a touching tribute by mounting his coffin onto the back of a vintage tractor before taking him to see his beloved cows during his final journey. (David Brookes,SWNS/Zenger)

A farmer was given a fitting send-off after being taken to his funeral on a tractor-towed manure spreader via his cattle yard so he could ‘see his cows one last time’.

Retired cattle farmer George Brookes, of Uttoxeter, a market town located in England, in the U.K., died on July 31 following a long battle with lung cancer at the age of 85. His family paid a touching tribute by mounting his coffin onto the back of a vintage tractor before taking him to see his beloved cows during his final journey.

Son David, 63, said even after retirement George would get his wife to drive him around Lower Loxley Farm,where he worked until his late 60s, to have a look at the cattle. So family members thought it would only be fitting for the grandfather-of-13 to be taken on one last tour of the yard on the way to his funeral on August 17.

They borrowed a classic 4WD Ford 1000 series tractor which drove to the farm and his birthplace before heading to St Lawrence Church, in Bramshall, a village located in Staffordshire county, England, in the U.K.

Brookes’ son, a farmer and former councilor, said: “We had a proper farmer funeral for my dad and he went to have a look at his cows on a vintage tractor. We put him on a former muck spreader, we had used it a few times throughout the years on the farm.”

‘Muck’ is a British term for manure, dirt or waste matter.

“Dad would’ve laughed at the irony of the muck spreader, he didn’t want black cars. My father loved a lot of things but almost more than anything he loved his cows.

“He enjoyed nothing better than getting my mother to drive him to the cows and have a look at them. He just loved cattle, he spent a lot of time milking cows from his youth to late into his 60’s.

“He took great pleasure being driven around the farm, looking at the new buildings and all the animals, getting the girls to tell him about the animals. He was a very well-known and much-loved man in the area. Everyone knew my dad and he had around 300 mourners at his funeral. I imagine he’d be proud of his send-off.”

Brookes, who was a lifelong Stoke City FC season ticket holder, was the youngest of three brothers born at Chapel Farm, Beamhurst, in Staffordshire, on January 31, 1937. He and his family moved to Lower Loxley Farm, near Uttoxeter, in 1949 and David has continued in his father’s footsteps as he continues to work on the farm today.

Brookes built farmyards using blue stones and pieces of wood to make cowsheds with his brothers. He and his wife Kath have four children, 13 grandchildren and six great-grandchildren.

His son added: “He had a lot of things that meant a lot of things, Stoke City, his family and drinking pints while chewing the fat in the pub. If you ever needed him he would often be found in a pub. He would always turn up five minutes before it was due to close and he’d still be sat in the same place hours later.

“A lot of people gave us tremendous support in his final years. He was exactly 85 and six months to the day, he passed away at home. He had terminal lung cancer, he spent most of his life sucking on his pipe.

“On his journey he did also go past his home, his birthplace, we just drove around. I’m sure he would have loved it. We had a family get-together three weeks before he passed where all of his grandchildren were there. So we were able to all get together and that was most enjoyable.

“He was passionate about his lifestyle and the farm he lived and worked on. He was incredibly proud of his children and grandchildren, always saying none of them had a lazy bone in their bodies, which he always taught us to be like He was a grand character. He lived a fulfilled life, he wasn’t someone who made a lot of money in his life. But he was just happy.”