The excavation team managed to systematically explore the entire terrace of the burial ground in August 2022. 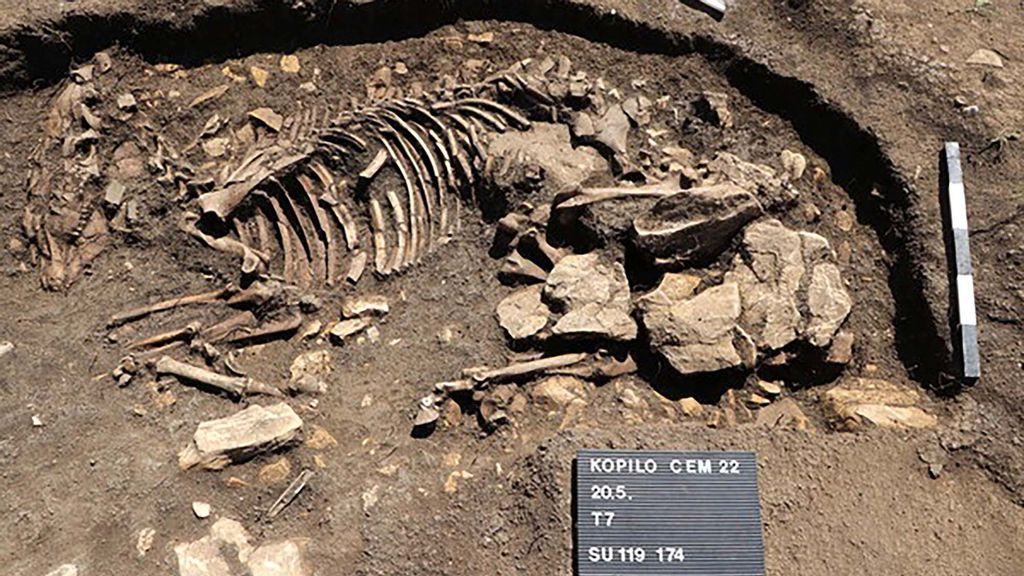 Picture shows horse skeleton, found between the burial constructions, undated. The discovery has been made at the Kopilo site in Bosnia and Herzegovina.  (ÖAW- ÖAI, M. Gavranovic/Zenger)

A necropolis found in the Balkan republic of Bosnia and Herzegovina has revealed a high mortality rate in the prehistoric period after archaeologists discovered 46 graves and 53 individuals from the Bronze and Iron Ages.

Human remains from the Kopilo Cemetery–discovered by archaeologists from the Austrian Academy of Sciences (OeAW) and from Bosnia and Herzegovina–showed that the dead in the region were buried and not cremated like in the rest of Europe in the Bronze and Iron Ages.

Kopilo, which is considered to be region’s first and so far only burial ground from the Bronze and Iron Ages and dates back to 1,300 BC, is located about 43 miles west of the country’s capital, Sarajevo. It is located about 2,000 feet above sea level.

The excavation team managed to systematically explore the entire terrace of the burial ground in August 2022, one year after uncovering the first graves on the hilltop settlement.

The Austrian Academy told Zenger News in a statement: “The construction of the graves used was completely unknown: they were built of stone, often enclosed by an outer ring and each contained two to five graves. The burial ground was continuously occupied from the 11th to the 5th century B.C.”

The archaeologists unearthed a total of 46 graves with over 50 individuals of all ages–all buried a sleeping position–with their legs and arms slightly bent. In addition, a small vessel could be spotted next to their heads, and was reportedly intended for the afterlife, along with bronze jewelry, iron weapons, and glass beads.

Tombs showing remains of females yielded significantly more burial gifts with different types of accessories, including metal finds that provided proof of communication with other more distant areas along the lower Danube River and in Macedonia.

Children were regarded as valuable members of the community, but were disproportionally represented, indicating a high mortality rate. DNA analyses of the prehistoric skeletons hope to provide the researchers with a unique insight in the ancient locals’ kinship relationships, nutrition and mobility.

A farming community, Kopilo was occupied continuously for 1,000 years. Archaeologists have found remains of beef cattle, pigs, and goats at the site, which indicates that the community engaged in livestock breeding.

Considered by experts as a pre-Illyrian Bronze and Iron Age culture, it featured various hilltop settlements and fortifications. Known for its metallurgical skills, the culture worked on both iron and bronze objects, and was active in the 8th and 9th centuries B.C.

Archaeologists have found bronze artifacts not seen before. They found bronze fibulae in previously unseen shapes. Fibulae are brooches or pins that are used to fasten clothing, usually at the right shoulder.

They evolved into various shapes, but all featured the principle of a typical safety pin. Unlike modern-day brooches, fibulae served a practical purpose by fasting clothing, such as dresses and cloaks, for both sexes.