Woman Shocked As Parrot Flies Into Her Apartment

Natalie Brereton, 34, discovered a rogue parakeet, which is a species of parrot, that had flown through her open window.
By Simona Kitanovska August 29, 2022
Facebook
Twitter
Linkedin
Email 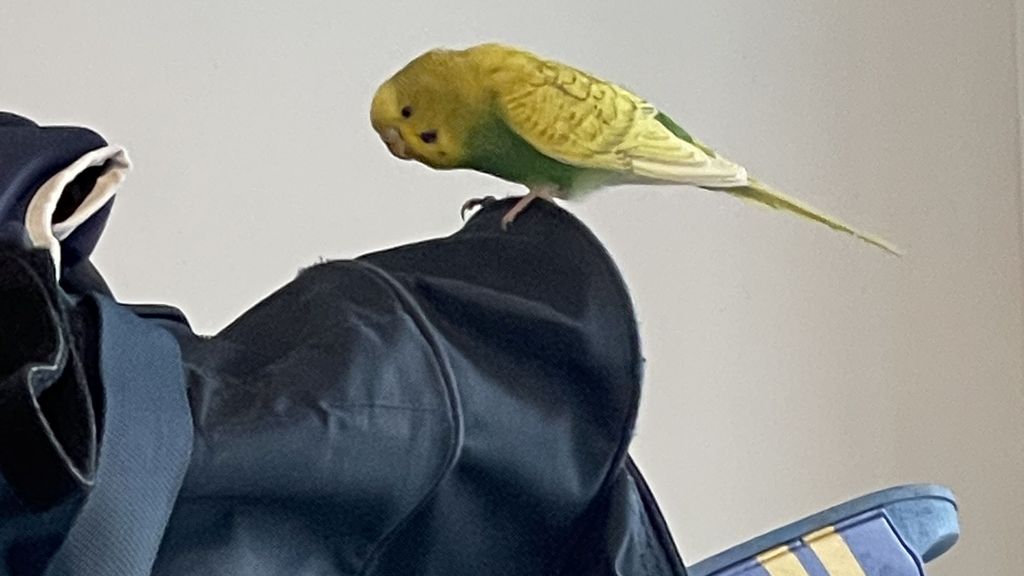 Sparky the parrot in Natalie Brereton's home, in Bristol, U.K., on August 21, 2022. Brereton was shocked when the random lost bird flew in through her fourth-floor apartment window. (SWNS/Zenger)

A woman was shocked when a lost parrot flew in through her fourth-floor apartment window.

Natalie Brereton, 34, was watching the news on her couch when she heard chirping from her bedroom.

She discovered a rogue parakeet, which is a species of parrot, that had flown through her open window, into her bedroom and was happily chirping away on her windowsill.

After an hour and a half of attempts to catch the flying visitor, she managed to capture the bird in a cardboard box and took it to a local vet. Brereton appealed to friends on social media to help track down the owner.

“It was a funny, mental, can’t-believe-this-is-happening nightmare! We live on the fourth floor of a high building, we couldn’t believe it had got in! We’re both alright with birds for the most part but this was new levels of stress,” said Brereton, a digital marketer who lives in Bristol in the south of England.

“We have high ceilings so he kept flying around and swiping our heads which was equally funny and terrifying. We also didn’t want to distress him too much by trying to grab him so we got a cardboard box with some air holes in and put some cucumber and water in it with some newspaper. When he eventually flew into it, we shut the lid and put a tea towel over the box to take it to the vets,” Brereton went on to say.

With Sparky the parakeet safely at Zetland Vet Hospital, Brereton and her Instagram account tracked down its owner. Within just a few hours, Rianne Bendall, 36, got in touch to say Sparky belonged to her daughter Maddie, nine, and he had escaped when her younger sister Lelilah, seven, opened a window.

Sparky the pet bird was reunited with its owners after just a few hours after entering her home on Sunday, August 21. The plucky bird had flown around two miles to reach her home.

Sparky is now back home with his relieved owners with mom Bendall thanking Brereton and the vets whilst adding that the naughty parakeet is “grounded for a while.” Full-time mom Bendall, who lives roughly two miles away from Brereton in Knowle, Bristol, said: “It is an unbelievable thing that has happened. We still can’t believe it, nobody can, it’s a miracle!

“He got out Saturday afternoon. We let open his cage for a bit of freedom and he normally stays in the front room, but on this occasion, he flew upstairs. My daughter Maddie shut all the windows, but when she went up about half an hour later, my bedroom window was open and we couldn’t find Sparky anywhere.

“My younger daughter Leilah admitted she opened the window to talk to the dog who was out the back and forgot to shut it back up. Maddie has autism and has such a bond with Sparky. It was heartbreaking to see her so upset. It was the worst thing ever, knowing I couldn’t take her pain away.

“She cried herself to sleep and when I woke the next morning, I just sat staring out the back for hours, dreading Maddie waking up to the pain again. It was an amazing feeling hearing that Sparky had been found. It really is a miracle.

“Maddie cried when she found out and we can’t get over how he flew from here to Bedminster without getting hurt. Maddie and I would like to thank Natalie from the bottom of our hearts.”

Brereton said: “It’s amazing they were reunited–the power of social media, I guess! A lot of people also messaged me to say they were very entertained by the whole saga.