Skye passed away on Saturday, August 20, after collapsing in the garden and being immediately taken to the vets.
By Simona Kitanovska August 29, 2022
Facebook
Twitter
Linkedin
Email 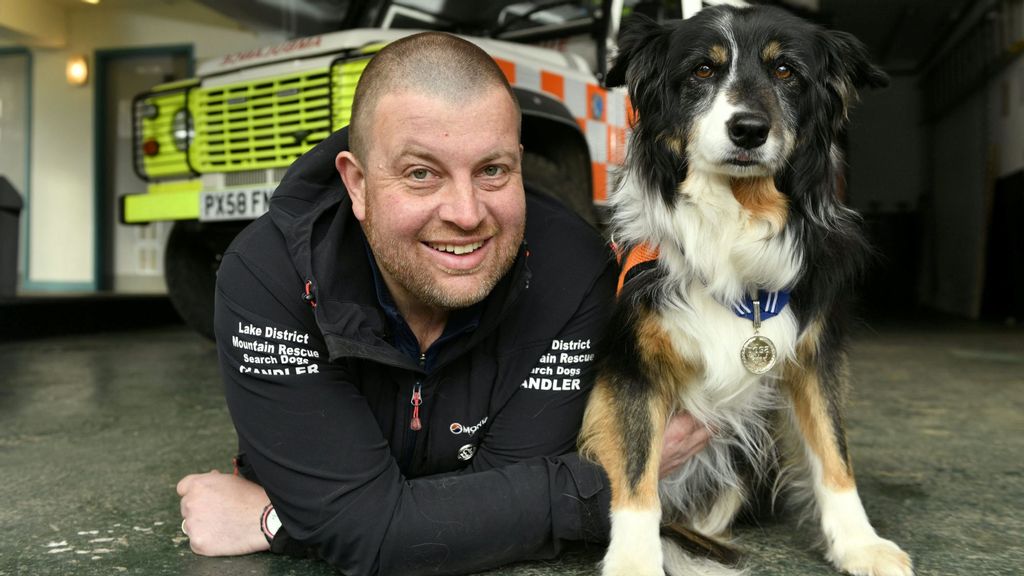 Mountain Rescue Search dog Skye with John Leadbeater in November 2021. Skye has been paid tributes by people in the U.K. after passing away on August 20, 2022, as it had spent over 11 years being in service, making it the U.K.'s longest-serving rescue dog. (Stuart Walker,SWNS/Zenger)

Tributes have been paid to Britain’s longest-serving mountain dog who has died at the age of 16.

Skye the Border Collie served with the Lake District Mountain Rescue Searchdogs in northern England, and took part in more than 200 searches before passing away on August 20. She was the U.K.’s longest-serving mountain rescue dog, having served for 11 years in the Cumbria region before retiring in 2020.

Skye was also the first mountain rescue dog to win an Order of Merit, which is known as an animal’s Order of the British Empire, from the People’s Dispensary for Sick Animals, a veterinary nonprofit in the U.K. She passed away on Saturday, August 20, after collapsing in the garden and being immediately taken to the vets. Tests showed that her spleen and liver were abnormal, and it is suspected there had been a rupture.

Her owner John Leadbetter said: “We discussed that any type of operation would have been high risk for Skye with her years and so we were pushed to make the hardest decision, for Skye’s dignity, for her quality of life and as a mark of respect for all those years she has looked after the human aspect of her life, we made the call.

“So at 11: 20 hours, wearing her green graded search dog tag and search dog jacket we set Skye free from pain, from this world, this life and so her final send away.”

Leadbetter has paid tribute to Skye, describing it as his ‘mountain buddy’ who was ‘a true companion in all that life could throw at me.’ He said: “Thank you to all those people who have hid, helped and generally made her life a succession of brilliant adventures.

“Each and everyone of you will have your own tale to tell, a memory of Skye and know what she meant to you. To many she was a bouncy, waggy tail, with a sparkle in her eyes that could light up the fellside.

“There are many school groups, WI’s [Women’s Institutes], Ramblers, Cubs, Scouts and Guides that have wondered at the talent of our Searchdog’s as demonstrated by Skye. She has represented LDMRSDA at National and International levels acting as a great ambassador.

“To me, my Skye, my ‘mountain buddy’, was a true companion in all that life could throw at us. We have had mountain adventures, I’ve shed tears when I thought I’d lost her as a pup, she has urinated down me on her first helicopter training and battled the fiercest of storms.

“And each time she just knew when to give me the comforting paw or the checking glance, to reassure me. Always at my side.

“Skye’s passing leaves a big void in our household, we can take some comfort in the knowledge that, as a dog’s life goes, Skye had a pretty amazing and action-packed one.”