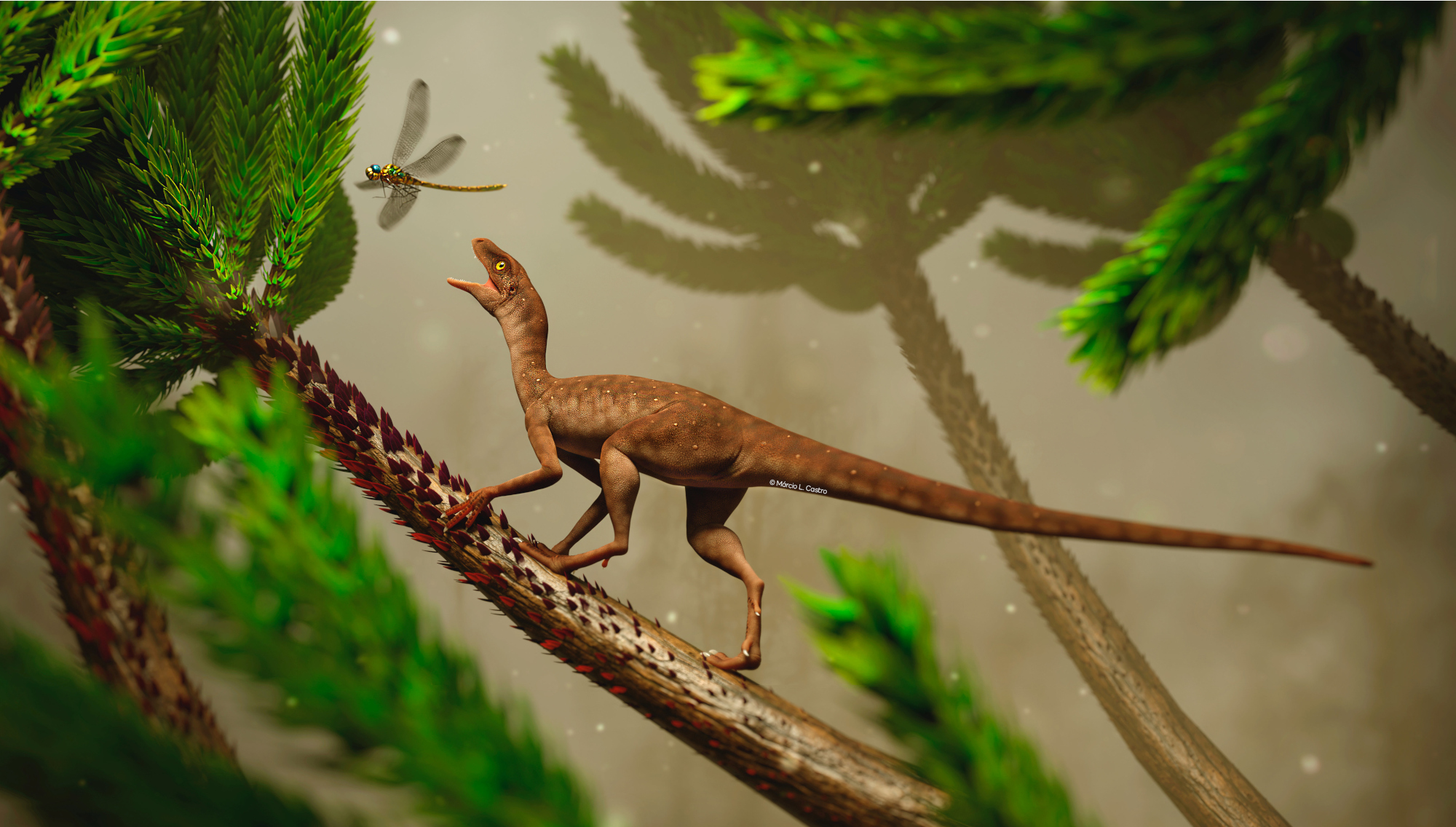 An interpretation of what the Maehary bonapartei looked like, pictured in an undated photo illustration. The newly-unearthed 225 million-year-old reptile in Brazil gave rise to the biggest creatures that ever flew, according to new research.(Márcio L. Castro,SWNS/Zenger)

A diminutive 225 million-year-old reptile unearthed in Brazil gave rise to the biggest creatures that ever flew, according to new research.

The lizard-like species measured just 15 inches from nose to tail. It is a “missing link” in the evolution of pterosaurs–that reached the size of airlanes. Named Maehary bonapartei, it will shed fresh light on how the giant predators got their wings.

“We hope so. Pterosaurs were reptiles that achieved flight even before birds. But the early origins of the wings is still poorly understood,” said paleontologist Rodrigo Muller of the Federal University of Santa Maria in Brazil.

Pterosaurs ruled the skies for 150 million years. They were close cousins of dinosaurs which evolved on a separate branch of the reptile family tree.

“Maehary is the most basal of the lineage of the largest flying animals that ever lived,” Muller said.

It belonged to a group of two-legged, wingless ancestors called lagerpetids that trotted around the supercontinent Pangea. The primitive animal fills a vital gap in the fossil record. It has been placed at the roots of pterosaurs’ family tree.

A skull, jaw, shoulder blade and teeth were dug up at a prehistoric animal graveyard in Rio Grande do Sol, southern Brazil. Remains, including the vertebrae, of another even smaller reptile called Faxinalipterus minimus were excavated at the same time. The remarkably preserved bones were entombed in rocks from the Late Triassic–a period of evolution hotly debated by paleontologists owing to a meagre fossil record.

“They lived about 8 million years after the ‘rise of dinosaurs’–living side by side with them. The fossil record of carnivores from 225 million-year-old strata is scarce. We believe they were hunted by fast and agile theropods–early ancestors of T Rex. Primitive crocodiles would also have eaten them–if they could catch them. Similarly, the fossils of these kind of animals are scarce,” Muller said.

“The skull of Faxinalipterus is unknown, so its diet is uncertain. Conversely, the teeth of Maehary appear related to an insectivorous diet. They lived in an environment dominated by crested lizard-like reptiles called Tuataras and tiny mammalian ancestors named cynodonts. The first long-necked dinosaurs that grew more than 12 feet tall were appearing in these ecosystems,” Muller added.

CT scans showed both species were wingless. The dentition pattern and close-spacing between the cavities were not consistent with pterosaurs.

“However, we know the wing of pterosaurs formed from the elongation of the fourth digit of the forelimb. It is basically a giant, elongated finger. As pterosaurs’ arm hand bones evolved for flying, they lengthened–and the equivalent of our ring finger became extraordinarily long,” Muller said.

Pterosaurs were among nature’s most successful animals. They fed on fish and small animals. Many had hooked claws and sharp teeth that they used to grab prey. Quetzalcoatlus was the most massive. As big as a giraffe, it had thin and hollow bones, a terrifyingly long beak–and a whopping 40-foot wingspan.

It was killed off 66 million years ago, along with other pterosaurs and the non-avian dinosaurs, when a city-sized asteroid crashed into Earth, creating the Chicxulub crater on the coast of Mexico’s Yucatan peninsula. Using an anatomical database, the Brazilian team established Faxinalipterus was closely related to lagerpetids, including Maehary–which are ‘sisters’ of pterosaurs. Together, they all form a broader group called Pterosauromorpha–of which Maehary is the most primitive.

“That is, Faxinalipterus and Maehary are not pterosaurs, but are related to them. Maehary is especially configured as a key element in the elucidation of how the anatomical characteristics evolved along the lineage to the pterosaurs themselves–fully adapted for flight. These species, with an estimated length of 30 centimeters (12 inches) for Faxinalipterus and 40 centimeters (15 inches) for Maehary, demonstrate the importance of continuing to collect fossils in this region,” Muller explained.

The genus name of the new species comes from Ma’ehary, an expression of the indigenous Guarani-Kaiowa people of southern Brazil and Paraguay. It means “who looks at the sky”–eluding to its position in the evolutionary line of pterosaurs.

Muller and colleagues are now looking for new findings to understand how the first vertebrates to evolve flapping flight came to be. The earliest were miniature compared to their gigantic descendants–with a wingspan of less than three feet. Only a handful of lagerpetid fossils exist because of their fragile bones. Brain features suggest enhanced agility–which they passed down to the pterosaurs.