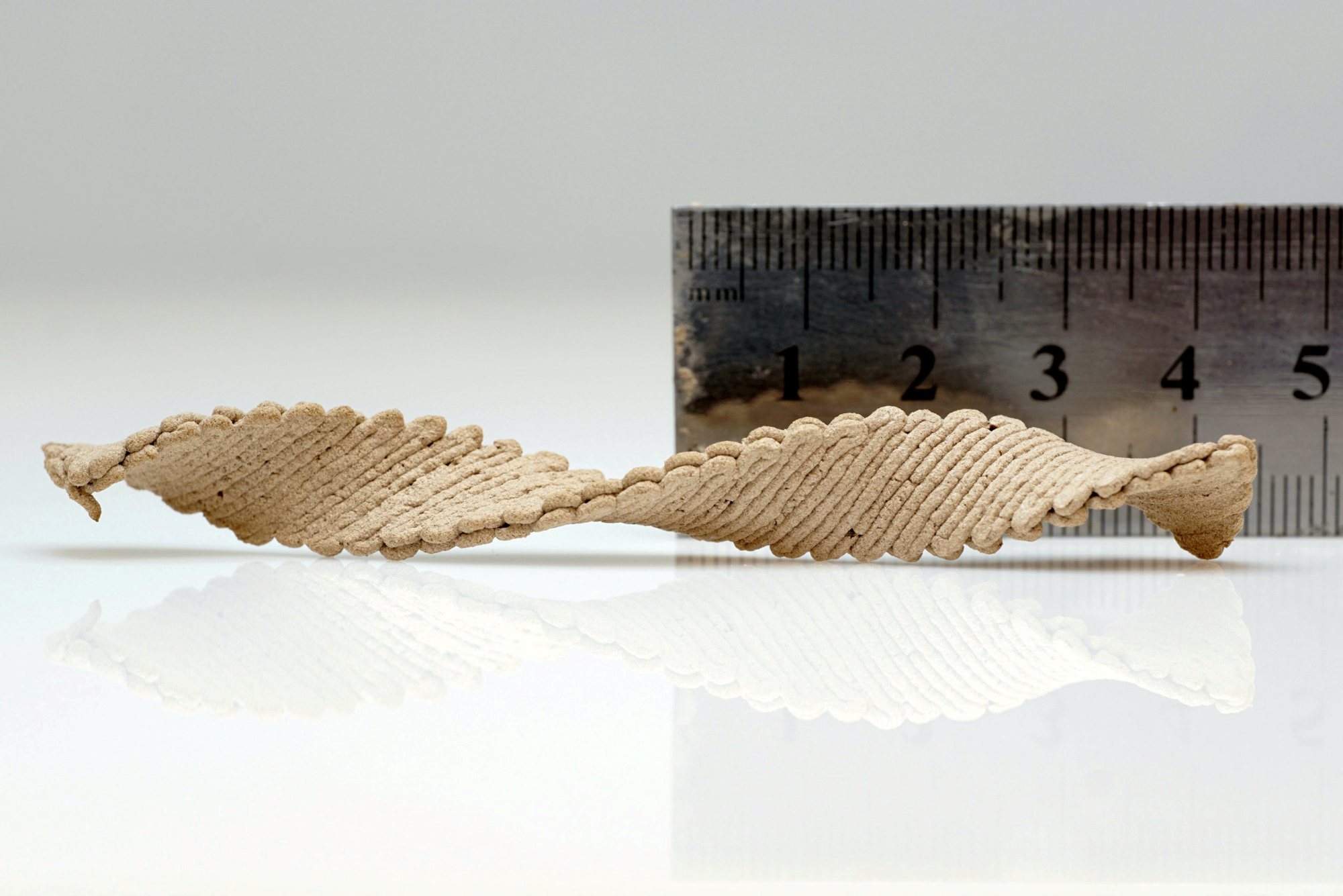 Wood ink printed as a flat rectangle that is programmed to form a complex shape after drying and solidifying, next to a ruler that is marked in centimeters, pictured in an undated photo. Researchers at the Hebrew Univerity of Jerusalem have created new 'shape-shifting' furniture by using a 3D printer and designed chairs and tables that can assemble themselves. (Steve Chatterley, SWNS/Zenger)

The pain has finally been taken out of flat-pack furniture–chairs and tables that assemble themselves.

The next generation of flat-pack technology “shapeshifts” into chairs, beds and sofas. Wooden objects created by a 3D printer can be programmed to self-morph into complex forms, say scientists.

They are usually made by sawing, carving, bending, or pressing. The Israeli team behind the new development say that method is very old-school. The team say the new technique opens the door to reducing shipping costs to a destination. Drying produces the required design.

The findings of the study, funded by the Israeli Ministry of Science, Technology and Space, were presented at an American Chemical Society meeting in Chicago on August 25.

Plants and some animals can alter their appearance or textures. After a tree is cut down, its wood alters as it dries. It shrinks unevenly and warps because of variations in fiber.

“Warping can be an obstacle. But we thought we could try to understand this phenomenon–and harness it into a desirable morphing,” said Doron Kam, a graduate student at The Hebrew Univerity of Jerusalem.

Artificial structures can’t shape themselves. But scientists have begun printing flat sheets that form into three-dimensional shapes. They just need a stimulus–such as a change in temperature or acidity or moisture content.

But these were made from synthetic materials–such as gels and elastomers, said principle investigator Eran Sharon.

“We wanted to go back to the origin of this concept, to nature, and do it with wood,” Sharon explained.

A few years ago, the researchers came up with an environmentally friendly water-based ink composed of wood-waste microparticles. The “wood flour” is mixed with cellulose nanocrystals and xyloglucan–natural binders extracted from plants. They then began using the ink in a 3D printer.

They recently discovered the way the ink is laid down dictates a piece’s morphing behavior as the moisture content evaporates. For instance, a flat disk printed as a series of concentric circles dries and shrinks to form a saddle-like structure reminiscent of a Pringles potato chip.

A disk printed as a series of rays emanating from a central point turns into a dome or cone-like structure. The ultimate shape can also be controlled by adjusting print speed. Shrinkage occurs perpendicular to the wood fibers in the ink–and print speed changes the degree of their alignment.

A slower rate leaves the particles more randomly oriented, so shrinkage occurs in all directions. A faster rate aligns them with one another, so shrinkage is more directional. The scientists learned how to program the print speed and pathway to achieve a variety of final shapes.

They found stacking two rectangular layers that are printed in different orientations yields a helix after drying. They also found they can program the printing pathway, speed and stacking to control the specific direction of shape change, such as whether rectangles twist into a helix that spirals clockwise or counterclockwise.

Further refinement will allow the team to combine the saddles, domes, helices, and other design motifs to produce objects with complicated final shapes–such as a chair. Ultimately, it could be possible to make wood products that are shipped flat to the end user, which could reduce shipping volume and costs.

“Then, at the destination, the object could warp into the structure you want,” researcher Sharon said.

Eventually, it might be feasible to license the technology for home use so consumers could design and print their own wooden objects with a regular 3D printer. The researchers are also exploring whether the morphing process could be made reversible.

“We hope to show that under some conditions we can make these elements responsive–to humidity, for example–when we want to change the shape of an object again,” Sharon added.