The rocks come from the floor of Jezero crater where a large river delta once flowed into a lake.
By Simona Kitanovska August 29, 2022
Facebook
Twitter
Linkedin
Email 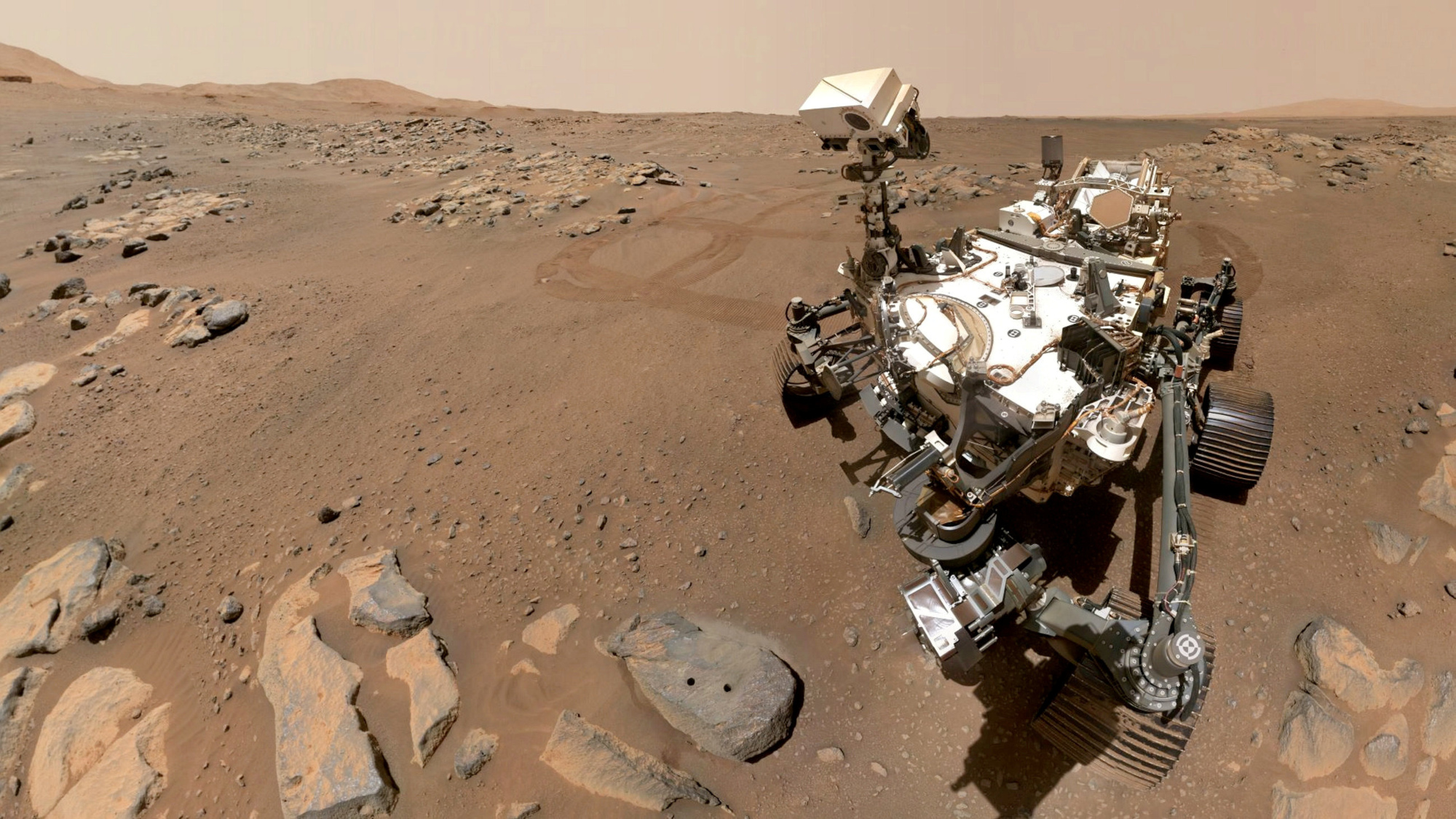 The Perseverance Mars rover takes a selfie as it looks at the “Rochette” rock, the first rock successfully sampled by the rover, in an undated photo. These rock samples are slated for return to Earth for more detailed studies that could identify signs of ancient life on Mars. (NASA,JPL-Caltech,MSSS,SWNS/Zenger)

Martian rocks that could contain signs of life have been collected by NASA’s Perseverance rover.

The ancient samples were altered by water that flowed over the Red Planet when it was a water world. They have been stored by the robot–ready to be returned to Earth.

The findings have been described in a paper titled Aqueously altered igneous rocks on the floor of Jezero crater, Mars, published in the journal Science Advances.

Professor Amy Williams of the University of Florida, who co-authored a new study on the out-of-this-world findings, said: “We have organisms on Earth that live in very similar kinds of rocks. And the aqueous alteration of the minerals has the potential to record biosignatures.”

It is the first step toward answering if Mars ever hosted life. The rocks come from the floor of Jezero crater where a large river delta once flowed into a lake. Scientists believe a wet Mars may have supported life billions of years ago. The Red Planet was once awash with water.

Etched into the rock are canyons created by raging rivers bigger than the Nile. Valles Mariner is six miles deep and 150 miles wide. On Earth it would stretch from Los Angeles to New York, making it the longest canyon in the solar system.

Professor Williams said: “These kinds of environments on Earth are places where life thrives. The goal of exploring the Jezero delta and crater is to look in these once-habitable environments for rocks that might contain evidence of ancient life.”

An astrobiologist, Williams is one of the long-term planners for the mission and helps decide where to send the rover and what tests and samples to prioritize.

Perseverance is equipped with a drill that bores into the sediment to collect potential evidence of fossilized microbes. The rover is now surveying the river delta to collect more samples for the Mars Sample Return mission.

Led by NASA’s Jet Propulsion Laboratory, Perseverance landed at the bottom of the Jezero crater in February 2021. Since then, scientists have explored the geological makeup of the crater floor using a suite of tools on board the rover that can take pictures of and analyze the chemical composition of rocks, as well as see their structure in the subsurface.

The U.S. team discovered that the crater floor had eroded more than they expected. The erosion exposed a crater made up of rocks formed from lava and magma, known as igneous rocks.

The scientists originally expected that sedimentary lake or delta rocks would lay on top of these igneous rocks. It is likely that the softer sedimentary rocks wore away over eons, leaving the tougher igneous rocks behind.

The rocks the scientists analyzed and stored for return to Earth have been altered by water–further evidence of a watery past on Mars. NASA and the European Space Agency are planning to return the rock samples to Earth around 2033.

The ambitious plan requires building the first vehicle that can launch from the surface of Mars and rendezvous with an orbiter that ferries the samples back to Earth. The payoff for that herculean task will be highly detailed studies of the rock samples that cannot be performed on the rover.

These studies include measuring the age of the rocks and looking for signs of ancient life. Because the rock samples taken at the bottom of the crater likely predate the river delta, dating these rocks will provide important information about the age of the lake.

Williams added: “I am excited about what is coming next.”