“My friends thought I was crazy and my mom, Thelma May, who passed away at 73, thought it was a mistake. “
By Simona Kitanovska August 29, 2022
Facebook
Twitter
Linkedin
Email 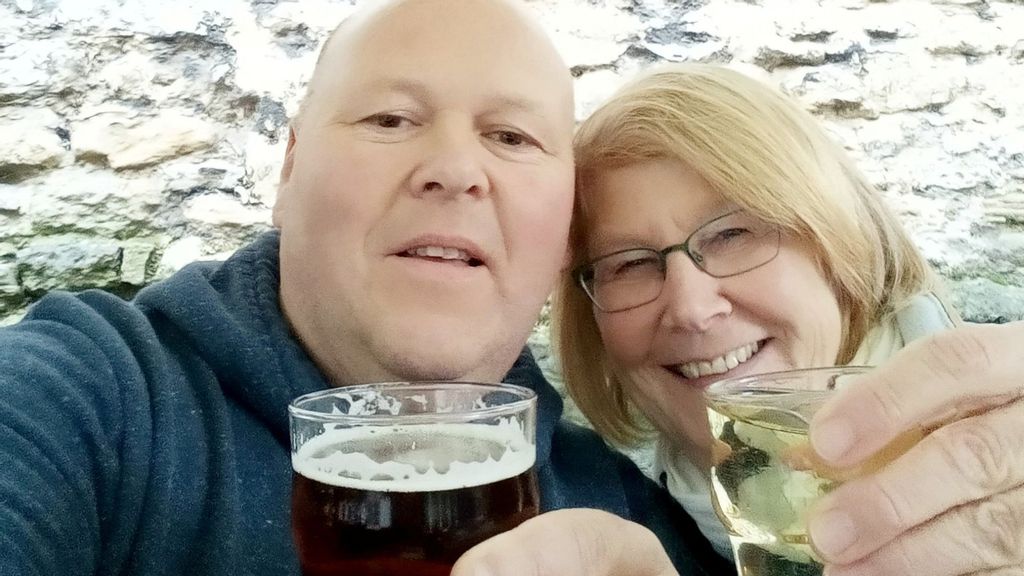 Nicola and Mike White. A couple with a 12-year age gap who were told their marriage would 'never last' are celebrating 27 years together – after getting engaged on their third date. (Nicola White, SWNS/Zenger)

A couple with a 12-year age difference who were told their marriage would “never last” are celebrating 27 years together–after getting engaged on their third date.

Nicola White, 63, says it was ‘love at first sight’ when she met Mike White, 51, when he walked in for an interview at the restaurant she worked at. The pair hit it off and Mr. White asked Ms. White to marry him on their first date and she said ‘yes’ on his third attempt at proposing–on their third date.

Friends and family discouraged the pair from tying the knot–thinking their relationship would break down–but the couple have proved their doubters wrong by celebrating 27 years together.

Ms. White, a retired support worker, from Hucknall, a market town located in England, in the U.K., said: “As soon as I saw Mike I fancied him. Something just clicked between us, and I knew we would work.

“My friends thought I was crazy and my mom, Thelma May, who passed away at 73, thought it was a mistake. But we’ve proved everyone wrong. We laugh every day. It’s been 27 years of fun.”

Mr. White, who works for an insurance company, said: “I knew as soon as I saw her at the bar that I was going to marry her. I’d been working there a week when I asked to marry her.

“I asked three times before she accepted it. We make each other laugh every day. It was fate.”

The couple first met in 1995 when Mr. White interviewed for the position of chef at the Pilgrims bar and restaurant on the Barbican in Plymouth, Devon, in the U.K.

“Mike said as soon as he saw me, he knew he was going to marry me,” Ms. White said.

“I fancied him straight away. It soon became a flirtationship. I tried to arrange all of my shifts so I would be working at the same time as Mike. Looking back now it must have been so obvious I liked him.

“I would lean up against the kitchen door, chatting to him while he prepared all the food. I used to help in the kitchen on the weekends, and we would have ice fights, flour fights, and sing Bohemian Rhapsody whilst preparing the Sunday roasts. Our manager was probably annoyed at us, all we did was chatter.”

Mr. White finally plucked up the courage to ask her out for a date and the pair went to bars in Plymouth, and he proposed on the spot.

Ms. White said: “I was flabbergasted. How many people propose on their first date? I knew we were getting along well, but never thought he liked me that much. I stuttered and didn’t know what to say, but I couldn’t help it… I wanted to say yes, I just need a bit of time to make sure I was making the right decision.”

After turning to friends, Ms. White was surprised by their negative reaction.

“They all thought I was crazy,” she said. “I had already been married and that hadn’t worked out, so everyone said you need to live with him first before you marry him.”

Mr. White would not take no for an answer and continued asking for her hand in marriage–until the third date when he said it was her final chance so she caved in and accepted.

In September 1995, the couple decided to take the plunge, forget what everybody else was saying, and tie the knot. The couple married at Plymouth Register Office with all their family members and spent just £300 on the bargain wedding.

“My dad met Mike for about ten minutes a few days before the wedding. It was a complete whirlwind,” Ms. White said.

Her ex-husband remained friends and he came to the wedding along with their four children–Sammie, 30, Daniel, 35, Trevor, 40, and Victoria, 41.

“I borrowed a second-hand dress from my manager.The boys wore their new school uniforms. It was a lovely day.”

Despite their friends and family expecting the marriage to break down, the couple are still deeply in love. They moved into a house in Hucknall, Nottingham, together in May 2014, and had a child, Rachel, now 25.

“Mike is an amazing dad and stepdad and we’ve proved everyone wrong now still being together. We still get strangers staring and mistaking Mike for my son or our eldest daughter’s partner,” Ms. White said.

“But we just laugh it off. We love to cook together and go on endless dog walks and do gardening together.

“We bought a campervan last year and have taken trips to the peaks in it with our dogs. We have a lovely family life and I’m so glad we listen to our hearts.”