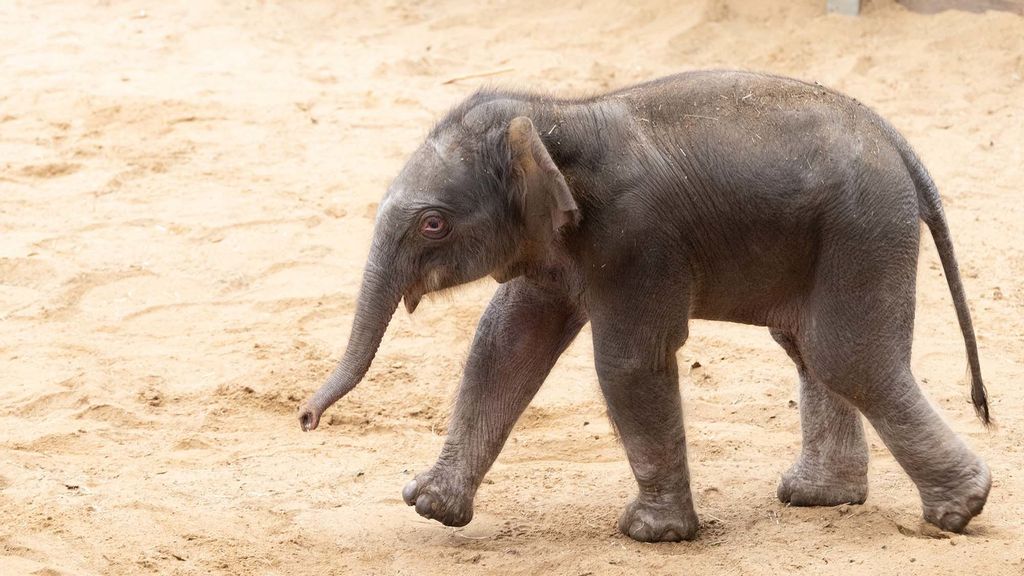 Donna’s newly born baby, an endangered Asian elephant, wanders about at Bedfordshire's ZSL Whipsnade Zoo, in England, in an undated photo. The baby was born at around 7 AM, on Monday, Aug. 22, 2022. (ZSL - Zoological Society of London/Zenger).

This is the moment a super-cute baby elephant dropped into the world at Whipsnade zoo as her loving mom gives birth.

The calf fell gently to the sand at the zoo enclosure while her mother Donna and her grandmother Kaylee helped the youngster out of its amniotic sac. Then–in extraordinary video footage of the birth on August 22–Donna can be seen herding other elephants into a corner to keep her baby safe.

Heart-warming footage shows the youngster getting to her feet and taking her first shaky steps around the enclosure at the U.K. zoo. Staying close to her mother, she shelters under 13-year-old Donna before checking out how to get her first taste of mom’s milk.

Keepers later described her as “milk drunk” after she’s downed so much in her first meal.

Elephant deputy head keeper Mark Howes said: “To say we’re delighted by the arrival of this calf is just a huge understatement–it’s a massive success for Donna, for the herd at Whipsnade Zoo, and for elephant conservation.”

He added: “This little infant is a really important addition to the European-wide endangered species breeding program for Asian elephants.

“We were able to watch the birth via our hidden cameras, and it was amazing to see grandmother Kaylee step in to show Donna how to break the amniotic sac that the baby was born in and move the rest of the herd out of the way to allow the little one to stand up for the first time.

“The third in a matriarchal family line here at ZSL Whipsnade Zoo, she’ll grow up being nurtured and learning from her mum Donna and grandmother Kaylee, as well as her ‘aunts’ and ‘cousins’ in the herd–and we’re so excited to see her personality develop as she grows.”

Asian elephants are regarded as endangered in the world. The International Union for Conservation of Nature (IUCN) has classified Asian elephants as ‘Endangered’, which means they are at a ‘very high risk of extinction in the wild’.

Not only are they endangered in the wild, but they also suffer in captivity where they tend to die early. As well as a high death rate, they also suffer from a low birth rate. Although the captive Asian elephants used by humans date back to engravings from the third millennium BC, it seems they have never gotten used to not being free in the wild.