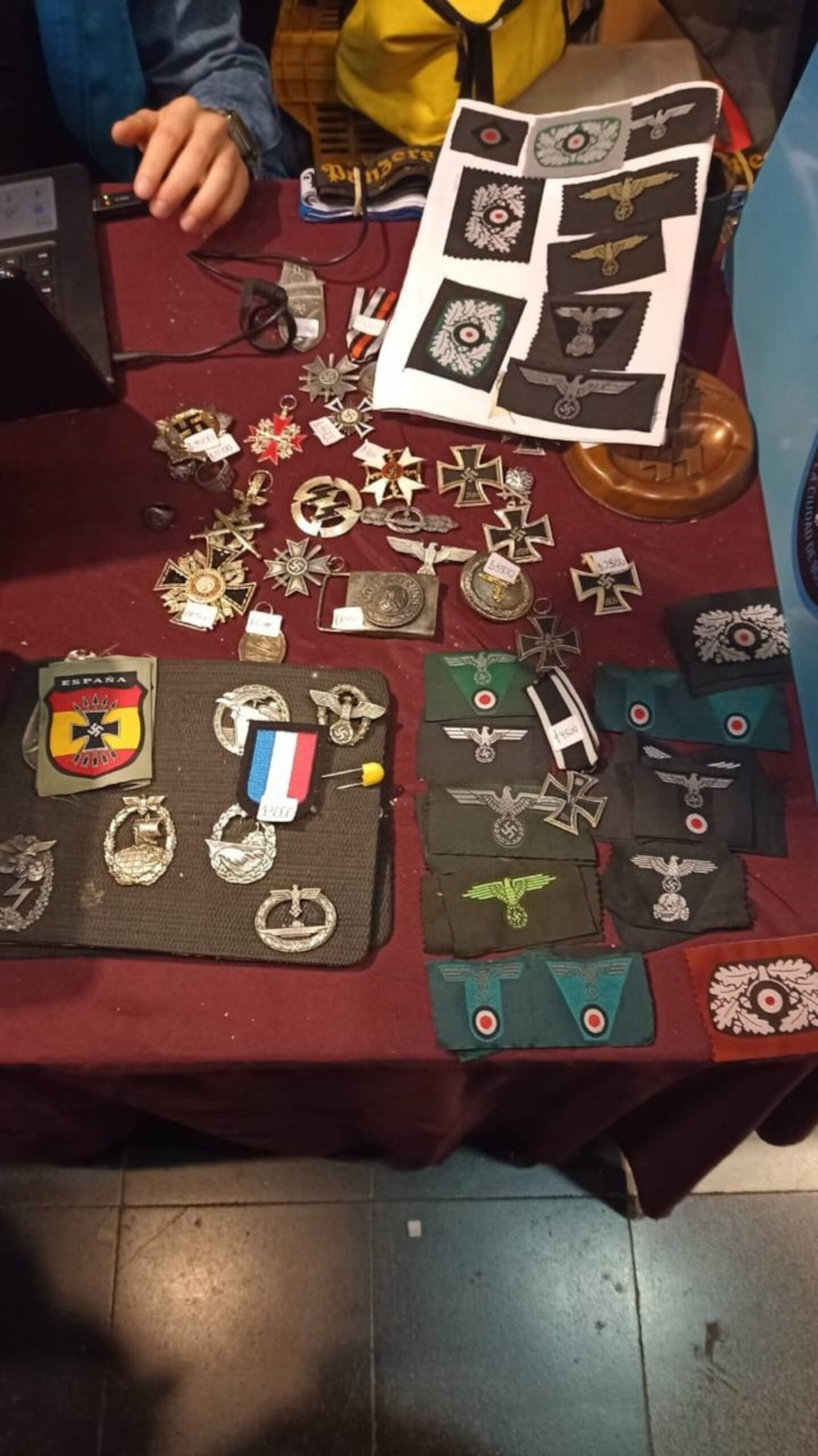 Picture shows some of the items with Nazi symbols confiscated by police, undated. A man was arrested for selling them at a fair in Buenos Aires, Argentina.  (Policia de la Ciudad/Zenger)

This is the moment police reveal a hoard of Nazi memorabilia seized at a stall at an international fishing and hunting fair.

Police footage of the raid shows row upon row of medals, badges and military patches featuring Nazi Germany’s swastika symbol. Elsewhere on the stall–at a show in the neighborhood of Villa Crespo in the city of Buenos Aires in Argentina – there are what appear to be pamphlets on Adolf Hitler and Italian dictator Benito Mussolini.

Police arrested the stallholder, not named in reports, according to a statement obtained by Zenger News from Buenos Aires police on August 23. The suspect was charged with promoting racial or religious discrimination.

The statement that the raid happened after a member of the public complained to the Buenos Aires police anti-terrorism unit. Police confiscated 132 metal badges, three rings, eight DVDs and a catalog with Nazi insignia.

They also seized 25 cloth patches, a metal eagle and an ashtray also linked to the Nazi ideology as well as 76 additional items made of metal. Authorities went on to shut down the stand while placing the suspect in police custody.

Last year, a 68-year-old salesman was arrested in Argentina when police seized seven WWII weapons and objects decorated with Nazi iconography. The man was accused of being the head of the Nazi Communist Party (Partido Comunista Nazi) in Buenos Aires.

He was seized after neighbors complained he had threatened them with guns. Many Nazis are believed to have fled to Argentina after the collapse of the German regime in 1945 through a series of escape routes that came to be known as, ‘ratlines’ which delivered war criminals into safe havens located in countries around the world.

While the trade of goods associated with Nazi history is considered common in flea markets and online platforms, controversy surrounding the idea has been addressed in a recent exhibition in Vienna entitled, “Disposing of Hitler: Out of the Cellar, Into the Museum.”

Each visitor to the exhibit who purchases a ticket receives a piece of paper that describes an object considered to be Nazi memorabilia and is asked if they would destroy, sell or keep the item.

The sale of Nazi memorabilia is banned in parts of Europe while the director of Israel’s Holocaust memorial Yad Vashem, Haim Gertner, has stated that some objects are worth preserving as he believes antisemitic events in history should be remembered.