Man Keeps Over 1,500 Gallons Of Rainwater In His Backyard

The gardener noticed droughts in the U.K. were getting more intense and became inspired by his vacations to Europe.
By Simona Kitanovska August 26, 2022
Facebook
Twitter
Linkedin
Email 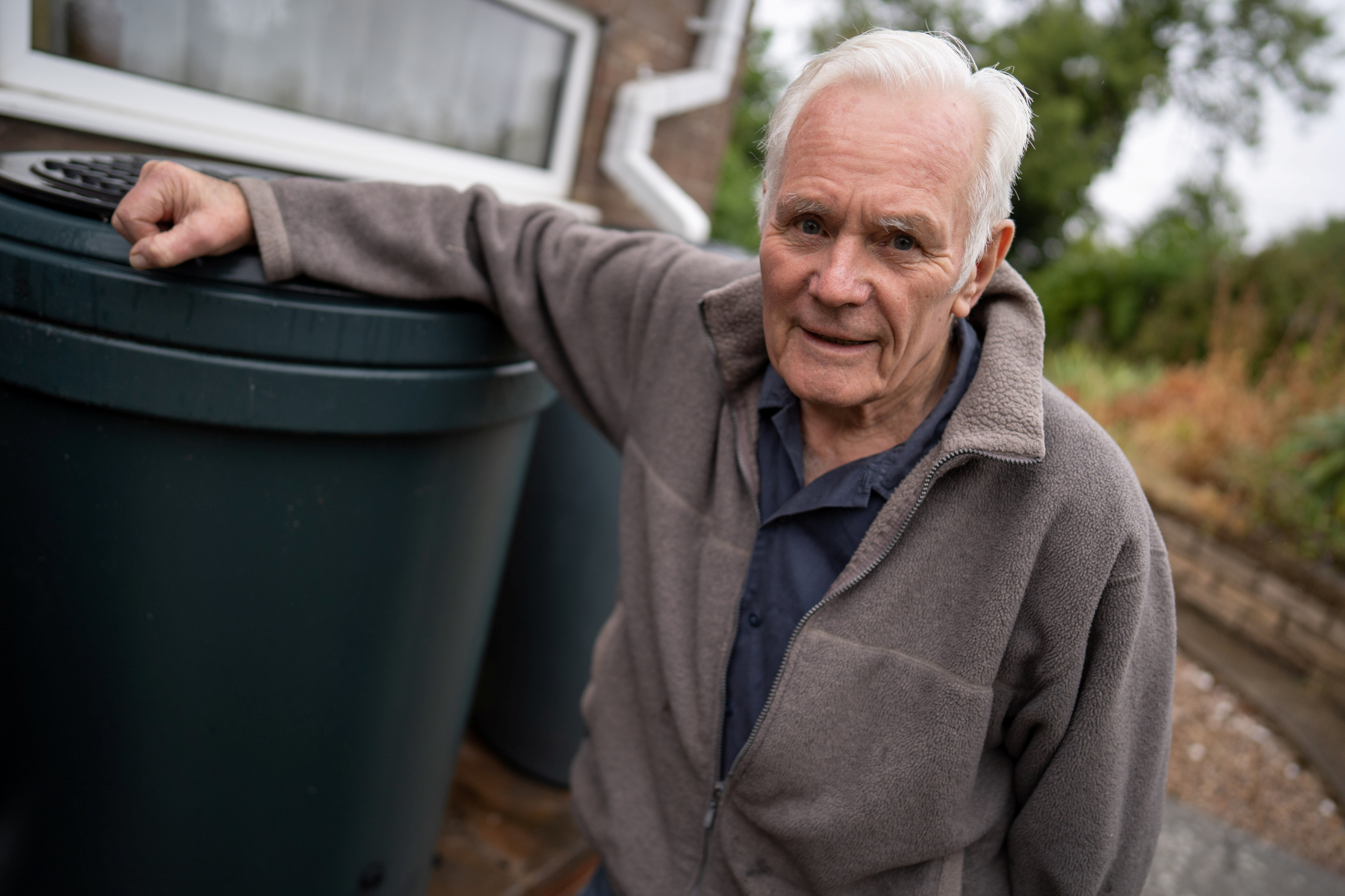 Peter Harden with his water butts that store 1,585 gallons of water, in an undated photo. Harden says he isn't worried about the newly-imposed hose ban as he's stored enough water to keep his garden green and lush. (SWNS/Zenger)

A man who has been storing water since a 1976 drought has more than 1,585 gallons of water amid a fresh round of water restrictions announced on August 23.

Retired headteacher Peter Harden, 82, has lived in his bungalow for 52 years and said he installed his first water tanks after the 70s drought. Harden said he lives in one of the driest areas in the United Kingdom and over the years has installed nine massive water containers.

The clay beneath his property in Ingoldsby, Lincolnshire, England, does hold water, but as soon as the U.K. gets a drought the clay starts to crack. But Harden isn’t worried, as he’s got enough water to keep the two-acre paddock where his home sits, lush and green.

It was announced a ban on watering has been introduced in parts of England’s West Country this week, following a prolonged period of dryness. The region is experiencing its worst drought in 26 years.

Harden, who lives with his wife Jill Harden, 80, said: “We live in an area with one of the lowest mean rainfalls in the country. We get a circa of 22 inches per year. We bought our two-acre paddock, the site of a demolished windmill, in 1969 and built our bungalow on it.

“At the time it was standing in water and throughout following winters this sort of continued until the great drought of 1976. This latter experience encouraged me to install a couple of rainwater butts.

“I used to hose pipe the garden, then I went on a water meter and I then thought it would be nice to have some water butts. I have now gone over 6,000 liters [1,585 gallons]. I have nine water butts.”

Harden, a keen gardener noticed droughts in the U.K. were getting more intense and became inspired by his vacations to Europe.

He said: “Our holidays abroad in Europe over 50 years frequently included cultural visits to ancient Greek and Roman towns.

“We were always impressed by the huge number of domestic underground cisterns that the Romans pre-built to catch rainwater for very dry summers. With this experience in mind, I gradually increased the number and size of my rainwater butts until about 15 years ago when I had nine 375-liter [99-gallon] capacity butts fed directly by rainwater from the bungalow’s guttering.”

About eight years ago, Harden bought two more 264-gallon intermediate bulk containers. Harden recently bought two more containers and linked the four together by a garden hose so that the contents leveled when he was using the water.

Harden said: “The large tanks, which stand on the ground surface, are filled directly by garden hose from some of the 375 liters [99 gallons] water butts to the bulk water containers at the bottom of our garden. Using an electrically powered submersible water pump, I pump water through a garden hose from one of the tanks through a spray attached to the garden hose.

“As the level of waterfalls in the one tank it levels out in the other tanks through gravity feed through the interconnected pipes. Three of my original 375-liter [99-gallon] water butts have since become unserviceable and I am waiting to replace them. I also am trying to buy two more 1,000-liter [264-gallon] bulk containers to increase my water storage volume.”