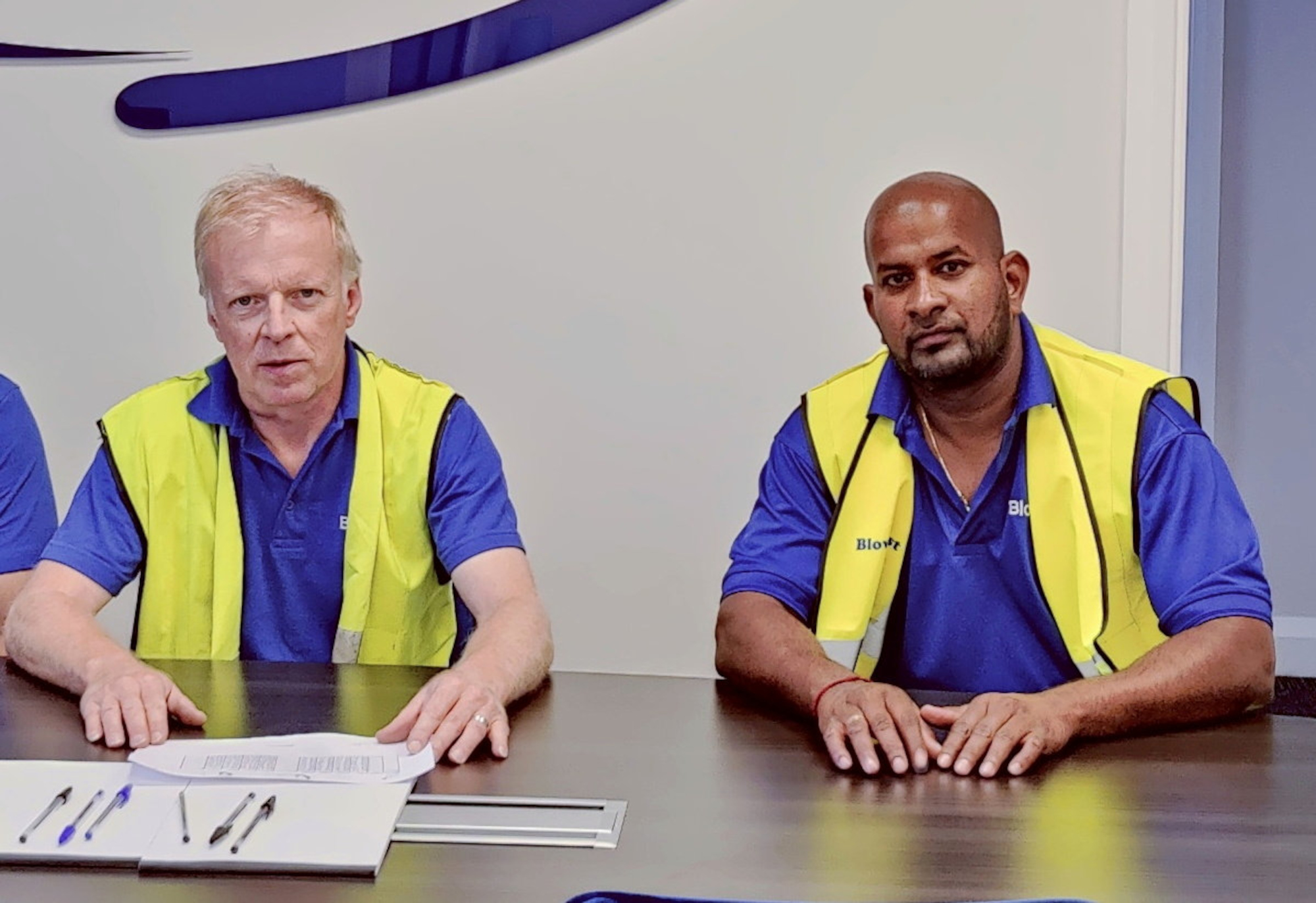 Dave Mumford (left) and Subramaniam Kuruparan from Blowplast, in an undated photo. Business owners across the U.K. are asking the government for aid following the enormous electricity bills they've been receiving. (Kuldeep Singh,SWNS/Zenger)

A business owner facing a £6 million energy bill is calling on Government to “pull their finger out”.

Kuldeep Singh, 55, is a director at Blowplast, a U.K. plastic molding company that makes milk bottles. He says his firm currently pays around £900k a year in electricity, but this is forecast to rise to £6 million in October.

Singh says his company has not faced a crisis like it in the 20 years it has been open and up to 90 workers could be affected. Inflation in the U.K. has already hit 10.1 percent, with fears it will rise even further, making electricity prices unaffordable.

Singh said: “This is the biggest issue I’ve seen in energy prices. Our annual electricity bill is set to go up to £6 million on October 1 and we don’t make that kind of money. So the Government need to pull their finger out and come up with a survival plan and focus on the industry.

“All they’re offering is small business relief which doesn’t even scrape the surface. We create plastic moldings for milk bottles all over England. We’re facing an energy crisis and if the government don’t take action 90 employees’ jobs could be affected directly or the consumer will have to pay the price.”

Steve Baker, a government representative, met with the business last week and urged ministers to act swiftly. He said: “This is an international energy emergency which will have devastating consequences for businesses and households across the U.K., Europe and the world.

“It follows not only the war in Ukraine but decades of ill-thought through energy policy by all political parties against which I have been battling. Ministers must act with extreme urgency and resolve to secure plentiful, inexpensive energy as fast as possible. We can only hope that the energy sector is able to respond swiftly enough to make a difference.”

Singh added: “I don’t see how people can survive a 562 percent increase [in price]. The figures are beyond the profitability of most companies. Initially, when we started the conversation it was only a double increase, every day the conversations were different. And even if I wanted to secure electricity at £6 million today, we would be unable to do so, that is how shaky the market is.”

Singh is not the only one struggling.

Ant Foulds has been running the Forth Bay Guest House in Leven, Fife since April 2017. He says that opening this winter may be impossible due to the rising electricity bills, which are already above £1,000 a month.

Foulds, 56, said: “The issue is the downturn in tourism over the winter and having to heat the house for fewer people. Nobody can book a room at the minute, at this moment in time my guest house is closed.”

“Action is needed right now. While the consumer prices rate of inflation bursting through 10 percent is eye-watering, producer input prices are up by more than double that figure and this will filter through, pushing up the cost of living even more.

“The cost of living crisis can’t be solved without addressing the cost of doing business crisis. That’s why we need to see a reversal of the hike in National Insurance, a cut in VAT and fuel duty, and help for struggling small firms on energy bills to match that being given to households.”

The energy regulator Ofgem is set to announce the new price cap, which will come into effect from October, on Friday, August 26. Based on Thursday’s gas prices, they think the price cap will hit £4,649.72 next January and £5,856 in April. It will then fall but remain at stomach-churning levels, hitting £5,235 in July and £5,235 next October.