The driver claimed he lost control of the brakes, causing the bus carrying eight people to skid onto the roadside.
By Michael Leidig August 25, 2022
Facebook
Twitter
Linkedin
Email 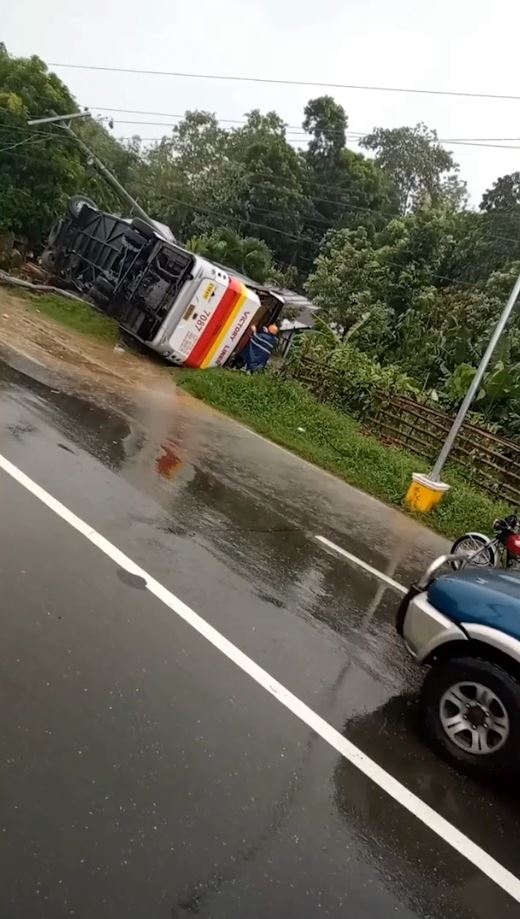 Picture shows the bus lying on its side after crashing into an electric pole in Naguilian, Philippines on August 22, 2022. (ViralPress/Zenger).

A passenger bus crashed killing two passengers after skidding on a wet road drenched by Tropical Storm Ma On in the Philippines on Wednesday, August 24.

Footage shows the vehicle lying on its side after crashing into an electric utility pole in the municipality of Naguilian in Isabela province in Luzon Island on Tuesday, August 23. Local media said two commuters died in the accident and a number of others were injured. Police said the wounded have been taken to the nearest hospital to be treated.

It brought torrential rains and floods in the country’s north, triggering the suspension of classes and government work in the nation’s capital and nearby provinces until Wednesday, August 24. After the storm left the area, the toll of victims included three people injured and thousands more forced out of their homes.

It also forced President Ferdinand Marcos Jr. to suspend all activities in public schools and government agencies as of Tuesday, August 23, until Wednesday, August 24. Meanwhile, certain warnings were raised also by several cities in southern China as they braced for the arrival of Ma-on which is expected to arrive on the coast of Guangdong province on Thursday, August 25.

The Hong Kong Observatory which is monitoring the severe storm has already issued an advisory of strong winds, with speeds of between 24 to 37 miles per hour predicted. It was expected that Tropical Storm Ma-on will land at Hong Kong late on Wednesday, August 24, and continue the battering into Thursday, August 25.

As a result of fears over the storm, the Maritime Bureau that manages the Hong Kong-Zhuhai-Macau Bridge closed it to ships after issuing a typhoon-level II emergency response. The severe storm is also expected to hit several other cities in Guangdong province including Chaozhou, Huizhou, Shenzhen, and Yangjiang.

The Shenzhen Meteorological Station also raised its blue typhoon warning signal raising it to yellow, while Zhongshan also issued a yellow signal that meant they suspended primary and secondary schools and child care education institutions classes throughout the city.

A tropical depression over the sea east of the Philippines developed into a storm which also brought rain to Taiwan according to their Central Weather Bureau. But the bureau predicted that apart from thunderstorms and heavy rain it would not really make landfall as it headed toward Hong Kong.