"I was guilty before I got there. Despite explaining the circumstances, I was still fined."
By Simona Kitanovska August 25, 2022
Facebook
Twitter
Linkedin
Email 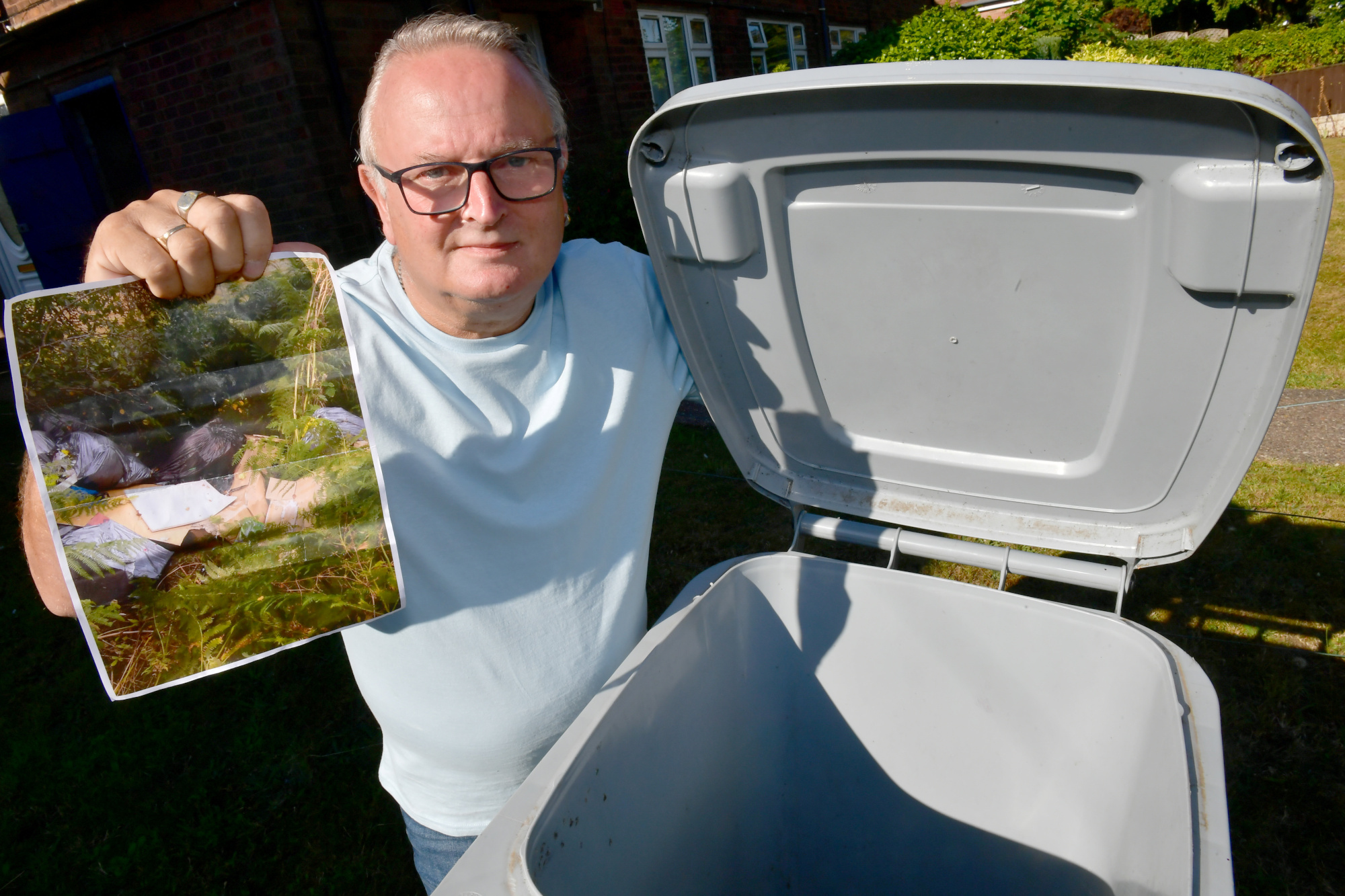 Dennis Spencer of Blidworth, England, has been accused of fly tipping after a box with his name and address was found on top of the trash. Undated photograph. (Newark Advertiser,SWNS/Zenger)

A fuming grandad was slapped with a fine for illegal dumping despite claiming his recycling waste was stolen from his trash can – before being dumped with cannabis and drugs paraphernalia.

Dennis Spencer, 61, says he is a ‘respectable recycling person’ and has never taken drugs in his life after being issued a £400 fine with by his local council. He received the penalty for incorrect waste disposal after a box with his name and address on was found with fly-tipped garbage in the village of Blidworth, located in England, in the U.K.

It was discovered along a secluded country lane along with 16 bags filled with cannabis plants and drugs paraphernalia on August 3. But Spencer maintains he had put the box in his can and it must have been removed and placed there deliberately as part of a ‘set up’.

The grandfather-of-one claims he is a ‘passionate recycler’ and would never dump any trash, taking time out every week to ensure his recycling is clean and correct. However, he was still fined under section 34 of the Environmental Protection Act following a hearing with Newark and Sherwood District Council.

The authority said father-of-two Spencer was responsible for properly disposing of any waste he produced. Construction worker Spencer, who lives alone, said: “In other words, if someone goes and steals your bin then you’re at fault. It’s a silly law.

“Besides, I did dispose of this rubbish, it was put in my bin god knows how long ago. How it got on top of these 16 bags of cannabis plants I’m unsure. This letter then landed through my letterbox with a summons – I wouldn’t mind but I had no idea what this was. I was left scratching my head.

“I attended the hearing with my brother but I was guilty before I got there. Despite explaining the circumstances, I was still fined. I said, so I’m going to fly tip on my own doorstep and leave a box with my name and address aren’t I?

“They’ve done me under an act where you’re responsible for your own rubbish – seemingly no matter what the circumstances. It’s my problem to put my box in the bin, but its also my problem if someone takes it out and plants it somewhere, but they’re saying that wasn’t possible.

“You could say that about a bin lorry shedding it’s load, they don’t pick all their rubbish and what happens if you’re bin blows over, you could be fined for that too. You don’t mind paying for something you’d done but I wasn’t aware of it. I didn’t even know where the lane was.

“It goes onto an old dirt track around a mile from my house, it has clearly been placed there strategically, it wasn’t even weather-worn. That’s been planted there and photographed. If I was going to fly-tip I wouldn’t leave a box with my name on. I’m not that stupid.

“Somebody’s fished it out of my recycling bin and thought it was a good idea to plant it on top of this fly tip, which was bags of cannabis plants and paraphernalia. I don’t do drugs, I never have, and I am a respectable recycling person.”

Spencer says he had tried to appeal his fine but so far his pleas have fallen on deaf ears. He added: “It’s about money to the council, they don’t care really.

“I don’t smoke, I don’t drink, I don’t even go out. Cannabis is the last thing I expected it to be when I opened the letter. I’m recycling mad, I recycle all the time. Why would I dump in my own village? I wouldn’t dream of dumping anywhere

“I’m very passionate about recycling, I wash stuff out, put it in the right bin and make sure it’s clean, I do it on a weekly basis. It’s outrageous, it’s disgusting. I’ve been set up basically, somebody has set me up and I think I know who’s done it but I can’t prove it.”

Roger Jackson, portfolio holder for cleaner, safer, greener at Newark and Sherwood District Council, said: “As outlined in the Environmental Protection Act it is the responsibility of the resident or business to properly dispose of waste they produce.