Helicopters Dispatched To Extinguish Wildfires In China As Drought Worsens

China has a four-level emergency response system for disaster relief, with Level IV being the lowest and Level I the highest.
By Michael Leidig August 25, 2022
Facebook
Twitter
Linkedin
Email 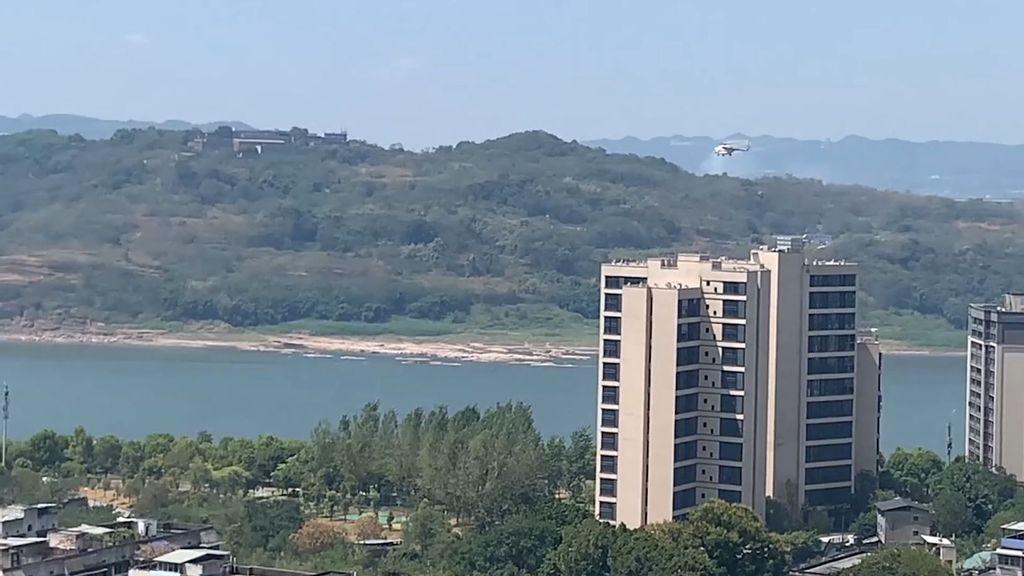 Helicopters in action to extinguish the fires in China's Chongqing municipality on August 24, 2022. The fires are believed to have been caused by dry conditions and temperatures due to a prolonged heatwave. (ViralPress/Zenger).

Footage shows the aircraft refilling a bucket of water in the Jialing River to pour over flames ripping through the mountainside on August 24. The region has been battling wildfires since August 17, with more than 1,500 residents evacuated.

Chongqing authorities claim there have been no casualties so far. Dry conditions and temperatures caused by a prolonged heatwave are believed to have triggered the fires.

On Friday, August 19, China issued a rare drought alert, raising a yellow warning–the third highest on the country’s four-tier scale–as officials scrambled to put out wildfires and salvage crops from the blistering heatwave in southwestern provinces. On Tuesday, August 23, they launched a Level-IV emergency response for a relatively serious drought in central China’s Hubei Province.

China has a four-level emergency response system for disaster relief, with Level IV being the lowest and Level I the highest. The China National Commission for Disaster Reduction and the Ministry of Emergency Management also sent a work team to offer guidance and support in relief work for the locals affected by the natural disaster.

On Tuesday, China’s national observatory renewed an orange alert for drought, the second most severe warning of the country’s four-tier weather warning system. The majority of regions in Hubei have been affected by moderate to severe drought, according to the National Meteorological Center.

While precipitation in sections of the Yellow River and Huai River, and parts of Jiangsu, Anhui and the Sichuan Basin will ease the droughts in the next three days, high temperatures and dry weather will linger in the other regions. The observatory advised local authorities to take appropriate emergency response measures, ensure the supply of water particularly for household use, promote water conservation, and produce artificial rainfall when necessary.

The shortage of water is fast becoming a catastrophe in China affecting not just people but also crop and electricity production. These waters in the country after almost half a century of strong economic growth and it needs an estimated 10 billion barrels of water per day – making the usage unsustainable in the North and also not threatening parts of the South as well.