"The emergency began when the captain of the Luca Santino fishing vessel contacted the Prefecture of Mar del Plata by radio."
By Joseph Golder August 25, 2022
Facebook
Twitter
Linkedin
Email 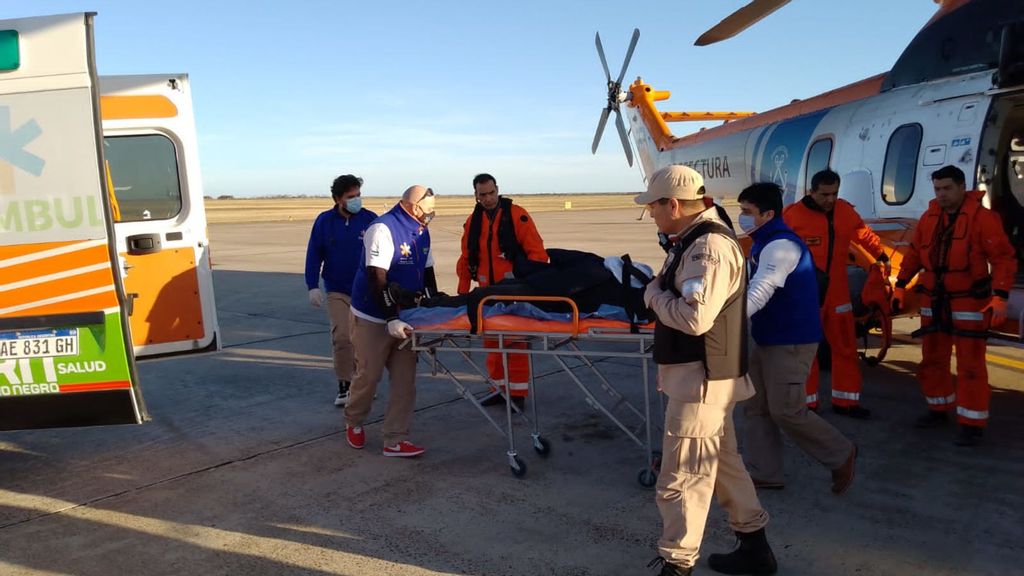 The rescued man on a stretcher being transported to the hospital, undated. He was being air-evacuated due to an acute illness, by the specialized personnel in the Argentine, Sea, in Argentina. (Prefectura Naval Argentina/Zenger)

This footage shows a fisherman being airlifted off a trawler and up to a rescue helicopter in a basket after experiencing stomach pains, vomiting and fever.

The rescue operation took place at sea, over 100 miles from Viedma, an Argentine city near the coast and the capital of Rio Negro Province, in northern Patagonia, the Argentine Naval Prefecture said in a statement on Monday, August 22.

The images show the sick man, who the Argentine Naval Prefecture did not name but who is reportedly 40 years old, being airlifted to safety from the fishing vessel while he lies in the basket. The helicopter can be seen hovering over the vessel during the rescue operation before the man is hoisted onboard the aircraft and given medical attention.

The footage ends with images of the helicopter having landed on dry land. The Argentine Naval Prefecture said that the man had been suffering from “fever, abdominal pain and vomiting” and “needed urgent medical attention”.

They added: “The emergency began when the captain of the Luca Santino fishing vessel, flying the Argentine flag, contacted the Prefecture of Mar del Plata by radio, reporting that one of his crew members was unwell.

“After follow-up consultations by radio with a doctor from the Force, as the symptoms persisted and he did not respond favorably to the treatment prescribed by the health professional, the sailor was ordered to be evacuated immediately, suffering from a possible acute abdominal problem.

“Quickly, from the Mar del Plata Air Station, a plane and helicopter from the Prefecture took off to the scene, with specialized personnel to attend this type of emergency.

“With a doctor and rescue swimmers on board, the personnel lowered a rescue basket onto the ship and hoisted the crew member up, who received first aid on board while the arrival of an ambulance was coordinated at the Edgardo Castello airport in the city of Viedma, in the province of Rio Negro.

“Once on land, the man was transferred to the Artemides Zatti Hospital where he remains hospitalized while his condition is assessed. It should be noted that the Prefecture, as the national Maritime Authority, works intensely, 365 days a year, to take care of sailors and intervene in emergencies in the waters, successfully managing to evacuate 11 crew members so far this year.”

There have been no further updates on the condition of the stricken sailor.