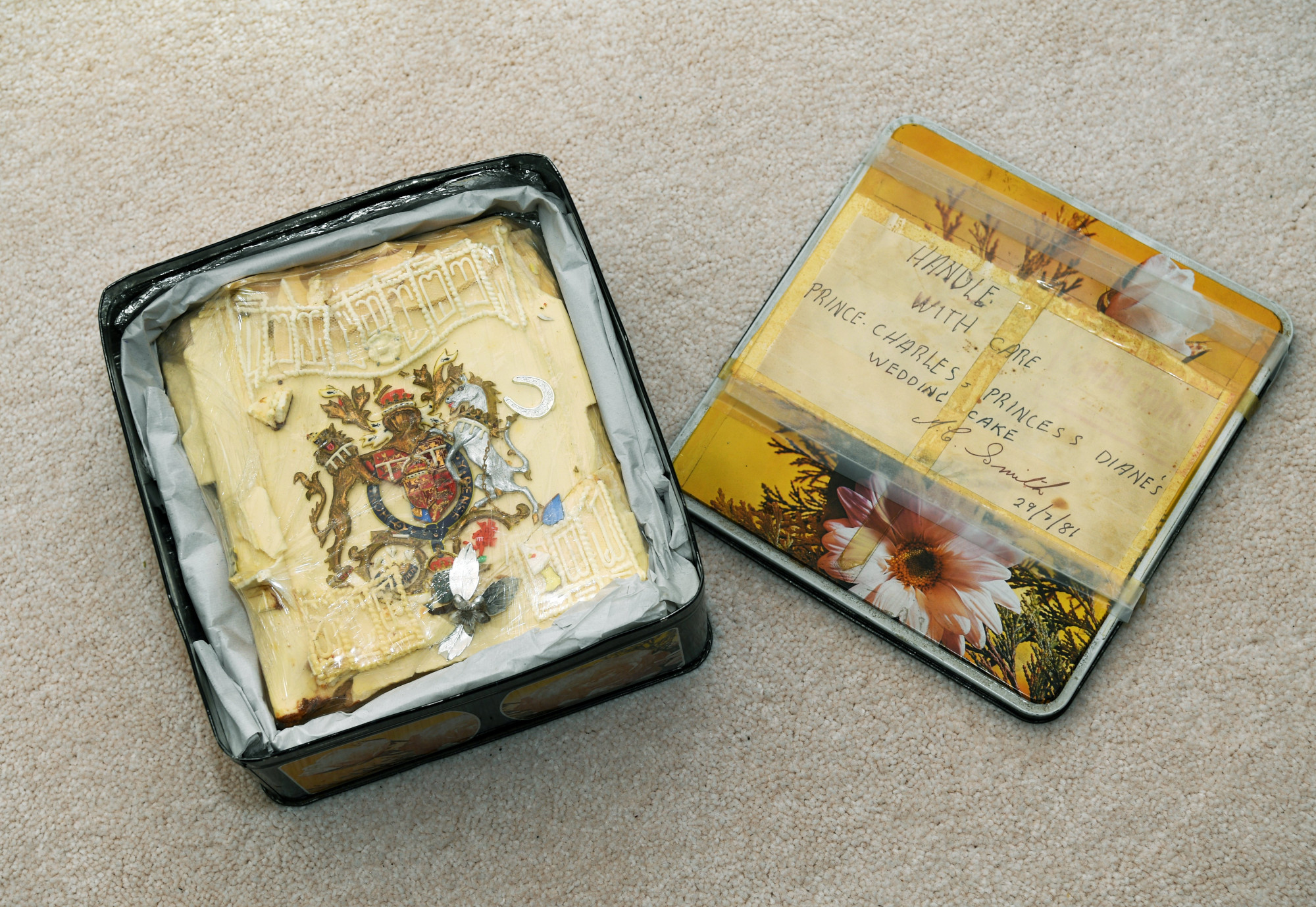 Gerry Layton's piece of Princess Diana’s wedding cake pictured in an undated photo. A slice of Charles and Diana's royal wedding cake is set to fetch £4,000 at auction 41 years after they tied the knot - despite the seller already buying it twice. (Yorkshire Post,SWNS/Zenger)

A slice of Charles and Diana’s royal wedding cake is set to fetch £4,000 at auction 41 years after they tied the knot – despite the seller already buying it twice.

Royalist Gerry Layton, 62, has already forked out to own the unique portion of marzipan cake which is decorated with a Royal coat of arms in red, blue and gold. It was given to Moyra Smith, one of the Queen Mother’s employees at Clarence House, following the 1981 ceremony.

The slice – which measures 8 inches by 7 inches and weighs 28 ounces – was preserved in cling film in an old cake tin for four decades until Layton bought it last August for £2,170. The decorative icing with marzipan base and crumbs of fruit cake attached is believed to be the only surviving example featuring the distinctive royal crest.

Layton decided to donate the cake to a fundraising auction in aid of Martin House Children’s Hospice in Boston Spa, near his native Leeds, in the U.K., in May. But he couldn’t resist putting his hand up to bid on the item again and won it for a second time.

Layton, a yacht captain who provides luxury tours on London’s River Thames and a former TV sound engineer/producer, said: “I couldn’t resist. I always said I would like a little nibble of the fruit cake crumbs and, as I was watching auctioneer Charles Hanson selling it, I suddenly thought, ‘I can’t let it go. ‘I have to have a little bite of this’.

“The bids went up to £2,000 and I ended up buying it back. So now I’ve spent more than £4,000 on one piece of royal wedding cake. But to me it’s worth every penny. It’s the only piece like it in the world. I think it’s been undervalued.

“Moyra was allowed to remove the crest, perhaps with the Queen Mother’s permission. She preserved it in cling film and kept it in her attic until she passed away. Her family sold it to a collector in 2008.

“It’s from one of 23 official cakes made for the wedding. It comes with a copy of the Ceremonial Procession, the St Paul’s Cathedral Order of Service and the Wedding Breakfast menu with a pull-out table plan, a rare item in its own right.

“In 1998, cake from the Duke of Windsor’s (former King Edward VIII) wedding to American divorcee Wallis Simpson in 1937 made $29,000 at auction and fruit cake from Prince William and Kate Middleton’s wedding sold for £$7,500 in 2014. That makes my cake the third most expensive piece of royal wedding cake in the world.

“I think it’s extra special because Lady Diana was a hugely popular member of the royal family. I always admired her. I visited Kensington Palace to see her wedding dress. I couldn’t believe it when I woke up to the news that she was gone.”

Layton is now selling the slice of cake once again and admits he fears he might bid on it for the third time.
It is expected to fetch between £3,000-£4,000 when it goes under the hammer at Hansons Auctioneers in London on Saturday, August 27.

Layton added: “I hadn’t planned to sell the cake again but Charles Hanson approached me after the charity auction and offered to sell it at Hansons Auctioneers. Before I knew it, he’d talked me into it. I just hope I’m not gripped by the curse of the cake and start bidding for it again – because I still haven’t had a nibble.

“I’d planned to be very careful not to disturb the icing and just try and take a crumb out of the corner. But I never got a chance. It’s in safe-keeping at Hansons. It’s an ultra-rare thing and I think its value will increase over time.

“There was huge media interest when I first bought it. I ended up on Australian TV and a story in the Unites States compared it to a joke moment in American TV comedy Seinfeld when character Elaine accidentally eats the $29,000-slice of Edward and Simpson wedding cake. I will donate 50 percent of the proceeds to Centrepoint, a charity supporting homeless young people, and Great Ormond Street Hospital, both of which Princess Diana was patron of.”

August 31, 2022, marks the 25th anniversary of Diana’s tragic death at the age of 36 in 1997 following a road accident in Paris, France. She married Charles in London’s St Paul’s Cathedral on Wednesday, July 29, 1981. Had they still been married today they would have recently celebrated their 41st wedding anniversary and Diana would be 61.

“It’s a wonderful piece of memorabilia and a sweet reminder of Princess Diana, the Queen of Hearts who was adored by millions, not just in the U.K. but around the world.”