She was born with a congenital limb difference meaning that her left arm did not fully develop before birth.
By Simona Kitanovska August 24, 2022
Facebook
Twitter
Linkedin
Email 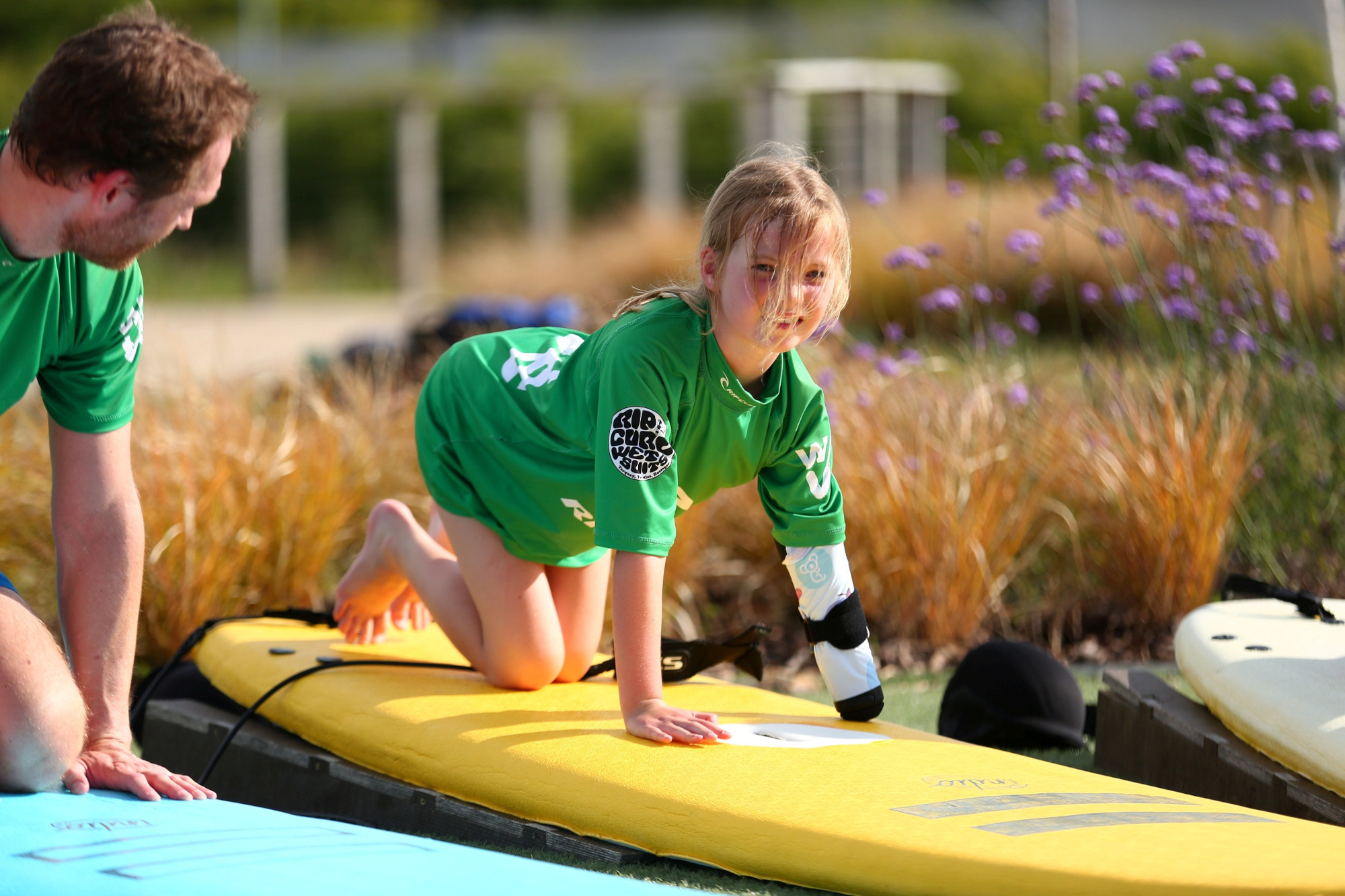 Joanie Melady from Chinnor, South Oxfordshire, tried out the new prosthetic arm at The Wave, Bristol, in the United Kingdom. Undated photograph. (The Wave, SWNS/Zenger)

An eight-year-old girl made a splash and became one of the first in the world to trial a new prosthetic arm – designed to help people surf.

Joanie Melady wore the new support mechanism – described as the first of its kind – created to help surfers with upper body limb differences to ‘pop-up’ on their board.

The young girl from Chinnor, a village in South Oxfordshire, in England, in the United Kingdom, tried out the new prosthetic arm at the U.K.’s largest inland surfing venue The Wave, Bristol.

Joanie was born with a congenital limb difference meaning that her left arm did not fully develop before birth.

Alan Melady, Joanie’s dad, said the prosthetic arm gave his daughter the confidence she needed to throw herself into the activity – and it turns out she is a “natural” on the water.

He said: “Joanie had never tried anything like this before but she’s really sporty and was super excited to get out there and give it a go. Turns out, she’s a natural!

“She smiled the whole time and as soon as she had ridden one wave in, she was straight back out there to catch the next one.

“The prosthetic gave her the confidence and support she needed to push up from the board to standing.

”I’ve surfed a few times before but she was way better than me! We’re so proud of her.”

U.K. startup Koalaa, which has been developing the tool for months, is on a mission to make prosthetics comfortable, affordable and accessible for anyone on the planet.

Among the surfers taking to the waves in Bristol was Nicole Brennan, who has a below elbow limb difference and has worked closely with the team at Koalaa on the design of the new prosthetic.

The ‘Nicole’ – named in Ms. Brennan’s honor, sees a soft fabric sleeve being worn that can be fitted with different tool attachments, depending on the task the user would like to do.

Nicole, founder of The IAMPOSSIBLE Foundation, said: “I spend as much time on the beach as I can and have always wanted to try surfing but never felt like it was a sport that was available to me.

“Being able to push up from the board to a standing position was always a barrier and it’s been amazing to work with the team at Koalaa to create a prosthetic that can make surfing accessible for those with limb differences like mine.

“Projects like this, which give people the confidence and tools they need to go out there and try new things, show that anything is possible, and that’s huge.”

The IAMPOSSIBLE Foundation is one of the only disabled-led charities for those with limb differences in the U.K.

It aims to create a world where ability is not defined by an individual’s form or physical appearance.

Nate Macabuag, founder of Koalaa, added: “It’s been so amazing to see members of the limb different community having so much fun trying out the new prosthetic on the water!

“Enabling people to go for it and to try new things, or even just helping to make everyday tasks a little easier, is why we do what we do.”

The ‘Nicole’ is now available for surf fans of all ages around the world.

Nick Hounsfield, Founder of The Wave, said: “We have always been passionate about making surfing accessible to all.

“Our whole space has been designed to be truly accessible, our surf coaches are trained to provide specific adaptive surf training for those with different needs and we have been huge supporters of Team England Adaptive for a number of years.

“We jumped at the chance to enable the testing and launch of this brilliant innovation from Koalaa, which we hope will break down even more barriers, so everyone can share in the joy of surfing.”

«Previous Post
Police Officers Criticized After Being Filmed Dancing The Macarena At A Pride Festival»Next Post
Painting From Train Station That Ridicules Hitler Was Probably Painted By Picasso, Say Experts