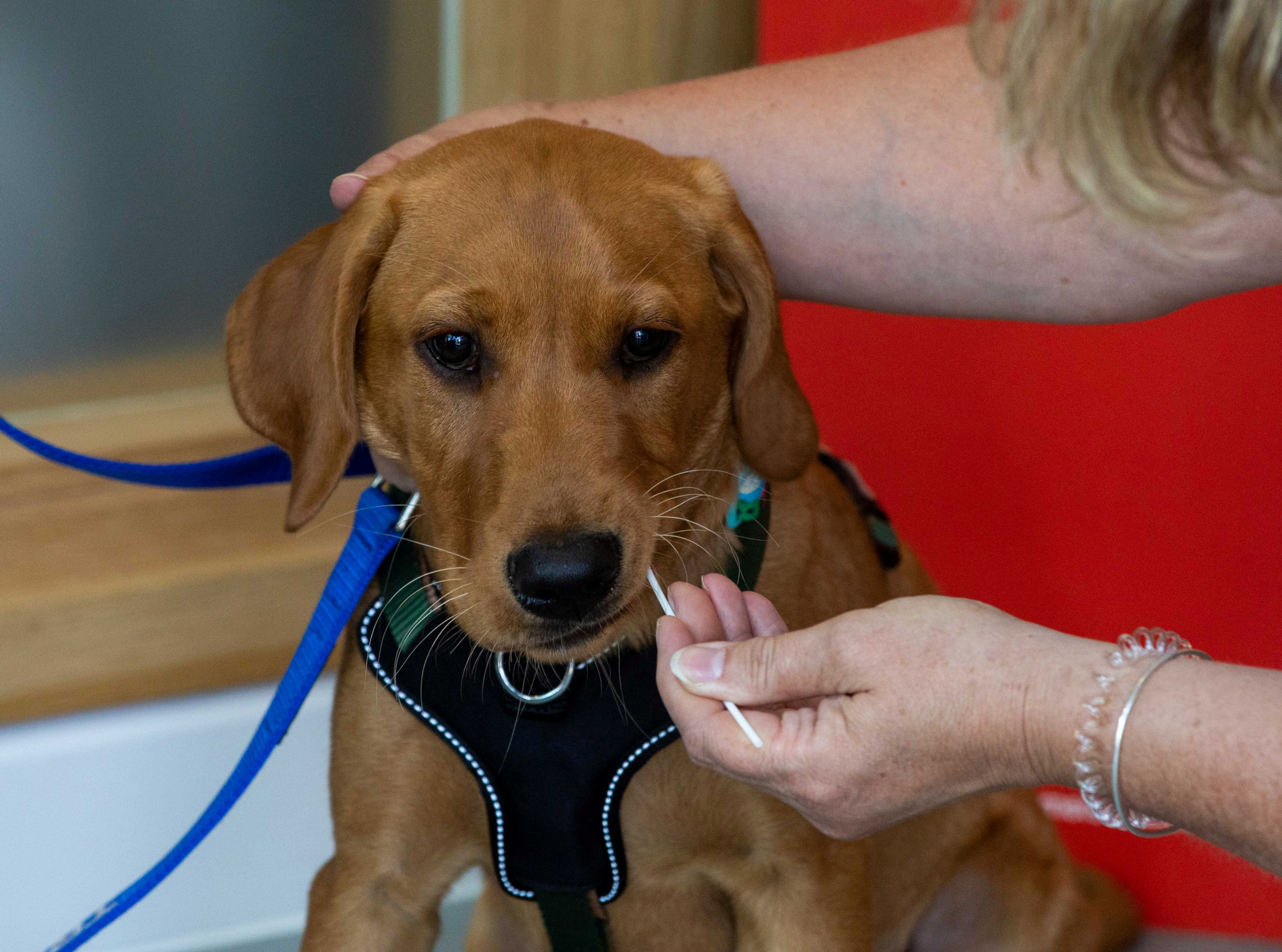 Sonny the dog has a DNA test at the Weston Super Mare Town Hall Police Station in Somerset, in the U.K. on August 19, 2022 . Police started taking DNA swabs from dogs - in new scheme to tackle the rising number of pet thefts. (James Dadzitis, SWNS/Zenger)

These pictures show police taking DNA swabs from dogs- in a new scheme to tackle the rising number of pet thefts.

The public are now able buy a DNA testing kit, swab their dogs and have their pets’ profiles recorded on the DNA Protected national database.

Police say if a suspected stolen dog is seized the new initiative will enable officers to correctly identify their rightful owner and return them.

The kits, which cost 74.99 British pounds ($88) from Cellmark Forensic Services, also come with house stickers and collar tags to act as a deterrent to would-be thieves.

Avon and Somerset Police say it supports the initiative both for crime prevention and to help reunite stolen dogs with their owners.

Police constable Natalie Cosgrove, lead for dog theft at Avon and Somerset Police in the west of England, in the United Kingdom, said: “People’s dogs are part of their family and we understand how distressing it is when pets are lost or stolen.

“The benefit of this approach is that the dog’s own DNA is the identifying factor, and this cannot be removed or altered.

“We’re getting the ball rolling in our area by swabbing some fire service dogs, as well as the well-being dogs who are available for our police officers and staff.”

Station Manager Martyn Bolt, also Jet’s handler, said: “Not only is Jet a valued member of the Fire Investigation Team, he is also a part of the family.

“I’m pleased we can register Jet’s DNA at this event, as another way to keep him safe from thieves and gives us some reassurance if he were to be lost or stolen.

“I’d encourage any dog-owners to get their pets swabbed to give that extra layer of protection and reassurance if the worst were to happen.”

Police and Crime Commissioner Mark Shelford said: “As a fellow dog-owner, I know how much our pets mean to us and the impact and even the thought of our pets being lost or stolen causes great distress for the whole family, let alone it actually happening.

“This is why I am encouraging local people across Avon and Somerset to protect their four-legged friends and join the dog DNA database so, if the worst case scenario happens, pets can be reunited with their owners.”