Drunk Bought A Sculpture From Himself On Ebay That Will Sell For $100,000

The artwork is called 'Twisting by the Pool' and was created by renowned Scottish sculptor Malcolm Robertson.
By Simona Kitanovska August 24, 2022
Facebook
Twitter
Linkedin
Email 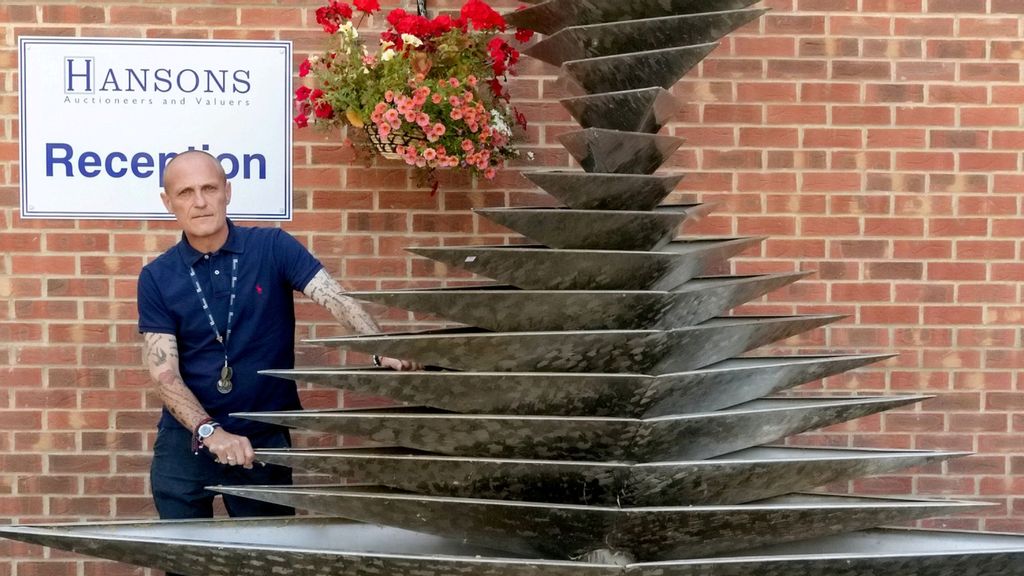 Hansons’ valuer Karl Martin poses with the sculpture in an undated photo. The unique artwork by an internationally-renowned sculptor is set for auction after being bought on a whim by a businessman – who won it after accidentally bidding against himself. (Mark Laban,Hansons,SWNSC/Zenger)

A businessman who bought a sculpture on a whim after downing a bottle of wine is set to sell his drunken eBay purchase – for $117,000.

Gareth Palmer, 62, accidentally bid against himself during a boozy evening to land himself the huge 14-foot piece of artwork last October.

The company boss had been browsing the internet when he came across the work called ‘Twisting by the Pool’ by renowned Scottish sculptor Malcolm Robertson.

He began making offers and was shocked when the price rocketed before realizing he was using two of his own eBay accounts to bid against himself.

He is now selling the striking stainless-steel structure and reckons it could go for 100,000 pounds ($117,000) when it goes under the hammer at Hansons Auctioneers next month.

It was crafted in 1996 after being commissioned to adorn the grounds of a company based in Rosyth, Scotland, which later closed down.

Palmer, of Derby, located in England, in the United Kingdom, who runs a company supplying microduct and pneumatic connectors, said: “It was bought by a Scottish blacksmith in 2001 and he kept it in his yard for many years.

“He eventually decided to sell and it ended up on eBay. I spotted it and must admit I’d drank a bottle-and-a-bit of wine when I started bidding.

“The price kept going up and I thought I’d been outbid. Then I realized I was bidding against myself.

“I have two eBay accounts, one on my iPad and one on my iPhone. I eventually outbid myself and won it.

“I realized it was an important sculpture. My research led me to Malcolm Robertson’s website.

“He’s a multiple-award-winning sculptor with a broad portfolio of work dotted around the U.K. and abroad.

“His work is held in private collections and several sculptures are in Florida in the United States.

“I understand this is the first time one of his sculptures has become available to buy at a traditional auction.

“There was one failed collection attempt because I was told it was four meters [13 feet] high.

“Eventually I got the artwork to Derbyshire and it’s been stored at a builder’s yard in Shardlow ever since.

“It’s been hidden away for 20 years but it deserves to be seen and on public display, so I’ve decided to sell it.

“I’m hoping for a Del-Boy-moment at the auction where you’ll see me fall over backwards with shock as the hammer falls. That’s what I want.”

Karl Martin, valuer at Hansons, said: “It’s an incredibly impressive work of art and, as Gareth says, deserves to be on public display.

“It’s currently standing tall outside Hansons’ Derbyshire saleroom in Etwall so, if you’re passing, do take a look.

“Robertson uses surreal imagery to create art which is visually striking and unusual.

“He’s been heavily involved in creating public artworks during his career so it would be fitting if an art connoisseur gave it a new home where people could see and appreciate it.”

Malcolm Robertson graduated in sculpture at Glasgow School of Art in 1974 and was awarded a teaching diploma by Jordanhill College of Education in 1975.

After three years spent working as an art teacher in Argyll, he went on to win international recognition for his work as Town Artist at Glenrothes, Scotland, from 1978-1990.

He liaised with the planning department to create site-specific sculpture, artworks and murals.

He established a professional practice in 1991 and has an extensive portfolio of sculptures and artworks in the U.K., Germany, India, and the United States.

Twisting by the Pool will be sold by Hansons Auctioneers, based in Etwall, Derbyshire, England, on September 27.

«Previous Post
Experts Uncover Fingerprints On Ceramics Dating Back 8,000 Years»Next Post
Woman Who Ate Seven Takeaways A Week Turned Her Life Around After Losing Half Her Weight