The recent discovery has marked Chapultepec Forest as one of the oldest archaeological sites in the Valley of Mexico.
By Alice Amelia Thomas August 24, 2022
Facebook
Twitter
Linkedin
Email 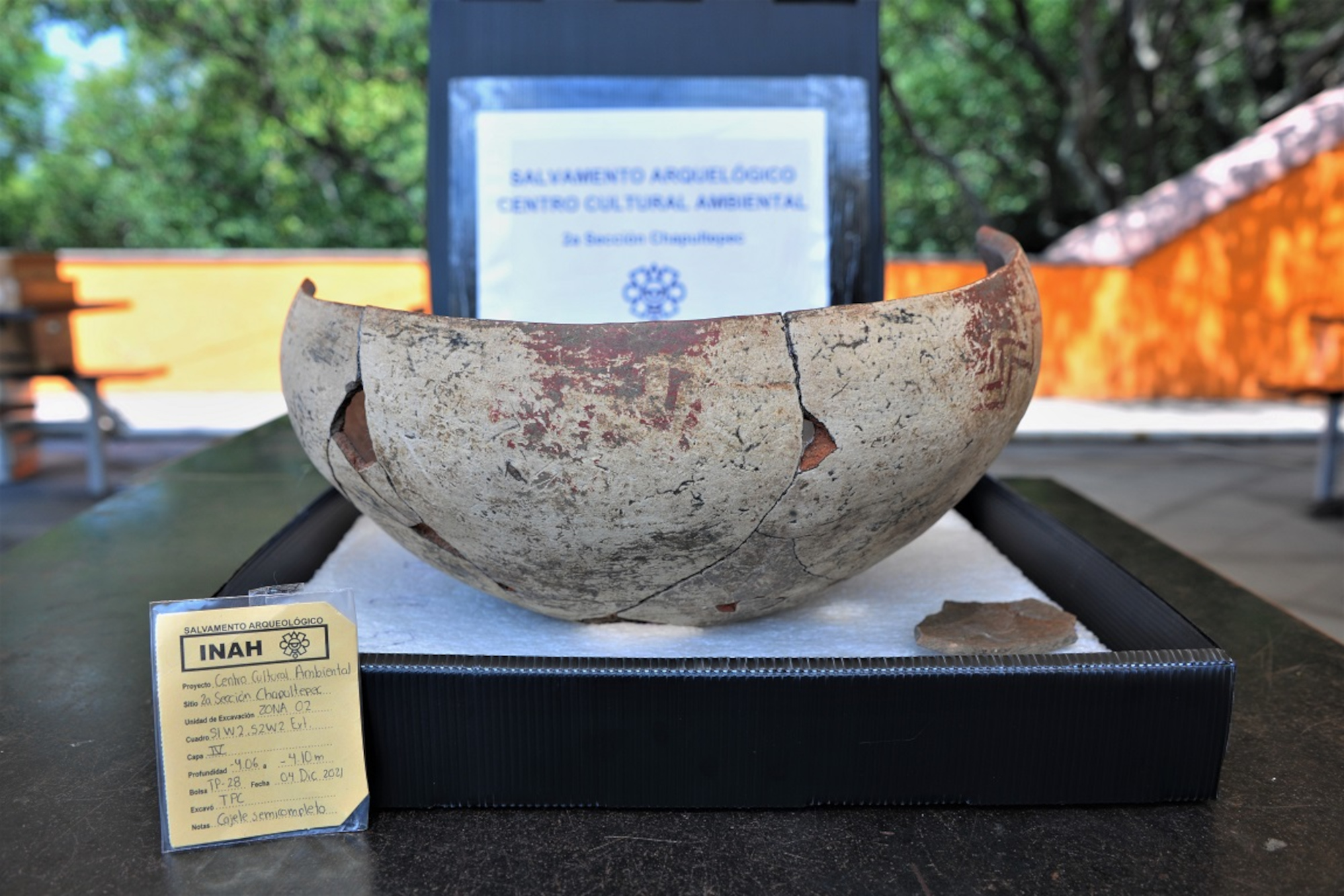 Photo shows white bowl with red geometric pattern, which was broken on purpose, undated photo. An archaeological discovery in Bosque de Chapultepec, Mexico revealed it as one of the oldest sites in the Basin of Mexico.  (Mauricio Marat, INAH/Zenger)

Archaeologists in Mexico City have discovered artifacts including arrowheads and human figurines that had laid buried for over 3,000 years under just over three feet of earth that is trampled on daily by hundreds of people.

Commonly referred to as the lungs of Mexico City, Chapultepec Forest – Bosque de Chapultepec – receives around 15 million visitors a year and features a zoo, a castle, two lakes, and the National Museum of Anthropology, among other tourist attractions.

The recent discovery, made in the 1,695-acre park, has marked Chapultepec Forest as one of the oldest archaeological sites in the Valley of Mexico, which was at the heart of a number of pre-Hispanic civilizations.

The findings date back to 1200-600 B.C. and laid buried for over three thousand years under a single yard of earth that is trampled on by hundreds of people daily.

Zenger News obtained a statement from the Mexican government, released on August 17, that explained that the discovery was made due to archaeological projects, supported by Mexico’s Secretariat of Culture, and carried out by the National Institute of Anthropology, which accompanies infrastructure changes carried out by the Chapultepec, Nature and Culture Project.

The findings include the ceramic remains and human figurines along with a miniature vessel that has been described as “the crown jewel,” which still contains traces of cinnabar, a bright red form of mercury used to decorate objects at the time, according to the statement.

Additional objects listed in the findings include arrowheads, flint tools, a small pointed object known as an ‘awl’ made out of deer bone and used to poke holes in leather as well as jadeite, a form of jade.

Maria de Lourdes Lopez Camacho, the excavation’s coordinator, said that the objects date back to the middle Preclassic Period in Mexico – 1200-600 B.C. – and were found in an area of the park that measured 124 feet by 78 feet, although only sixteen percent of the area was excavated.

What makes the discovery significant is that it is the oldest known archaeological find in the park to date and has caused the estimated age Chapultepec Forest site to double.

Previous findings in the park include a small settlement found in 2018 dating back 1,500 years, during the rise of Teotihuacan — a city and civilization that flourished from about 100 B.C. until its destruction around 525 A.D.

Teotihuacan preceded the Aztecs, who were conquered by Spain in 1521.

The objects were found intentionally broken and exposed to fire before they were arranged on a type of ceramic floor, while the excavation, which took place through a borehole, was able to detect the materials without causing any kind of disturbance, still according to the statement.

The findings are surprising in the sense that they are not directly related to a burial zone, which is uncommon in finds from this period.

The findings, along with other discoveries, prove that the park was supplied by a series of streams forming an ecosystem that offered optimal human living conditions at the time as well as non-floodable sections and shed new light on the Formative period in Mexico.