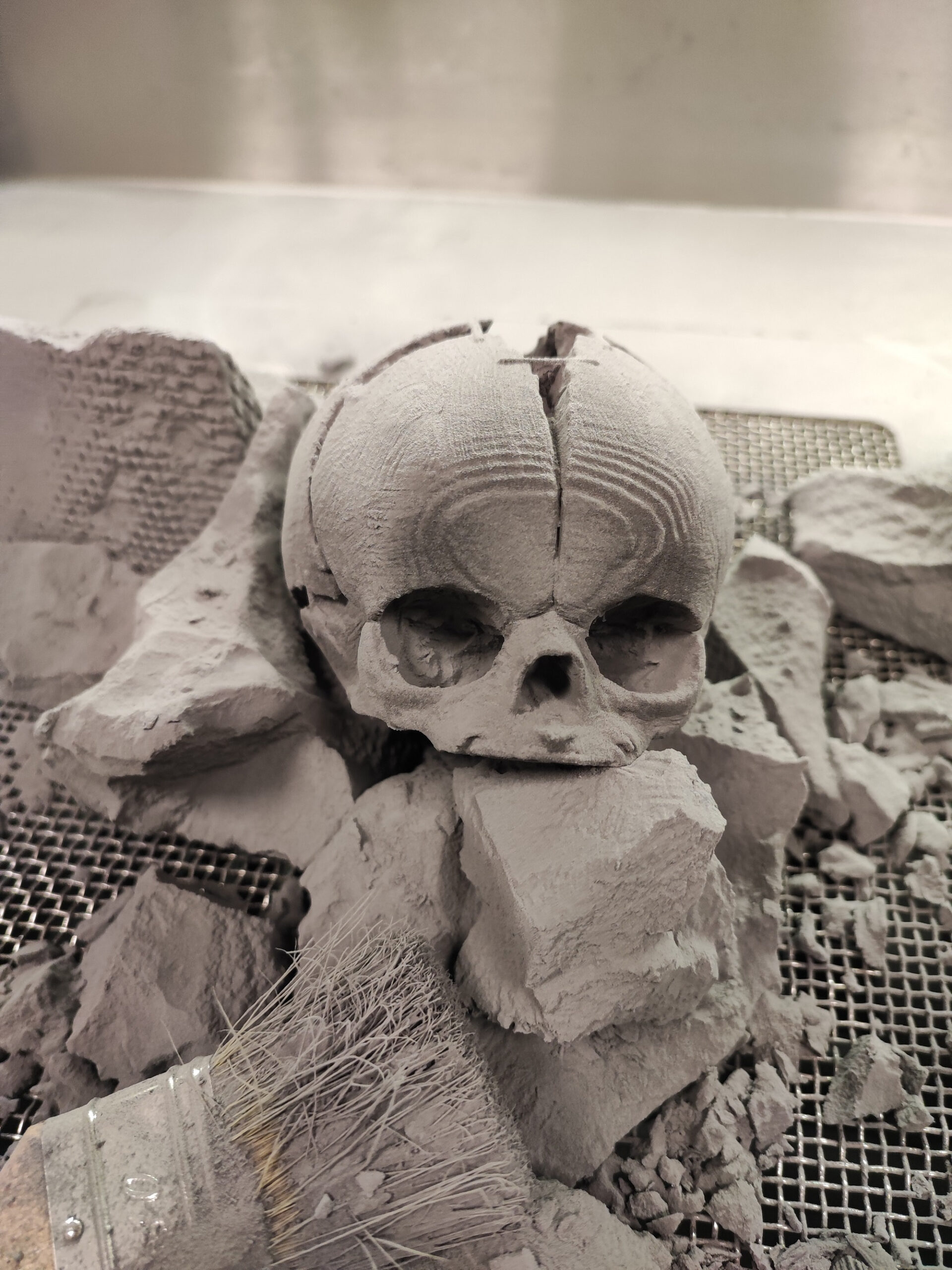 The 3D-printed baby skull created by the Polish tech company Sygnis, in February 2022. The print-out was used to perform life-saving surgery on a baby in the Neonatal Pathology and Intensive Care Unit at the University Children’s Hospital in Krakow, Poland. (Sygnis SA,SWNS/Zenger)

A baby born with its brain exposed has had life-saving surgery – thanks to 3D print-outs being made of her skull.

The newborn, from Rzeszow in Poland, did not have a formed occipital bone, leaving brain tissue partially exposed.

With the defect not diagnosed during pregnancy, vital surgery was needed within days of birth and the delicate nature of the procedure required exacting preparation.

A key element was the production of a physical model of the child’s skull on a 1:1 scale to allow surgeons to visualize and prepare for the operation.

Polish tech company Sygnis have now revealed their part in the medical innovation, which occurred earlier this year.

They explain: “In February 2022, we printed a pre-operative skull model of a newborn baby. With an urgent order and a 3D-printed model ready to go, we were approached by Pawel Ozga – a specialist in medical imaging segmentation.

“The baby was born in Rzeszow, and immediately after birth, was transported to the University Children’s Hospital in Krakow to the Neonatal Pathology and Intensive Care Unit, where detailed diagnostics were performed.

“Neonatal surgery differs dramatically from adult surgery. Pediatric surgery requires greater delicacy, precision and faster response, all due to the still-forming human body. Many times surgery must take place immediately after birth, where every minute is at a premium.

“The time after delivery was crucial here. At the same time, a center was sought that would agree to provide specialized treatment for the defect. Professor Lukasz Krakowczyk of the Oncology Center in Gliwice undertook this task.

“One of the elements of preparation for the operation was the making of a physical model of the child’s skull on a 1:1 scale.

“The doctors were looking for a contractor who, like them, would be ready to act promptly. The team of the e-Nable Poland Foundation: Krzysztof Grandys and Pawe&lstrok; Ozga, as well as the Sygnis SA company, rose to the challenge.

“Thanks to the cooperation of all parties, a pre-operative 3D printout of the newborn’s skull was created in record time, based on which doctors were able to predict the conditions during the baby’s surgery.

“On February 28, we received information that the operation was successful and the patient was discharged from the hospital. The 3D printouts went to the archive of the surgical case and are part of the doctor’s work and practice in similar cases.

Professor Lukasz Krakowczyk, MD (surgeon in charge of the operation), after the successful collaboration, emphasized that “the imaging studies were useful for determining the skull bone defect.

However, they did not perfectly coincide with the skin defect, which is why printing the model was so important. 3D printing will also be essential at the stage of reconstruction of the skull bone defect, when the need for perfect alignment and planning of the bone reconstruction will occur.”

The child, whose mother wants to remain anonymous, faces several more treatments in the future, as the bones of the child’s skull are evolving and undergoing constant changes.