Woman Cooks Up A Storm With Recipes From The Grave

"Since I’d started learning to cook during the pandemic, I decided to try cooking through these recipes and post about it.”
By Michael Leidig August 23, 2022
Facebook
Twitter
Linkedin
Email 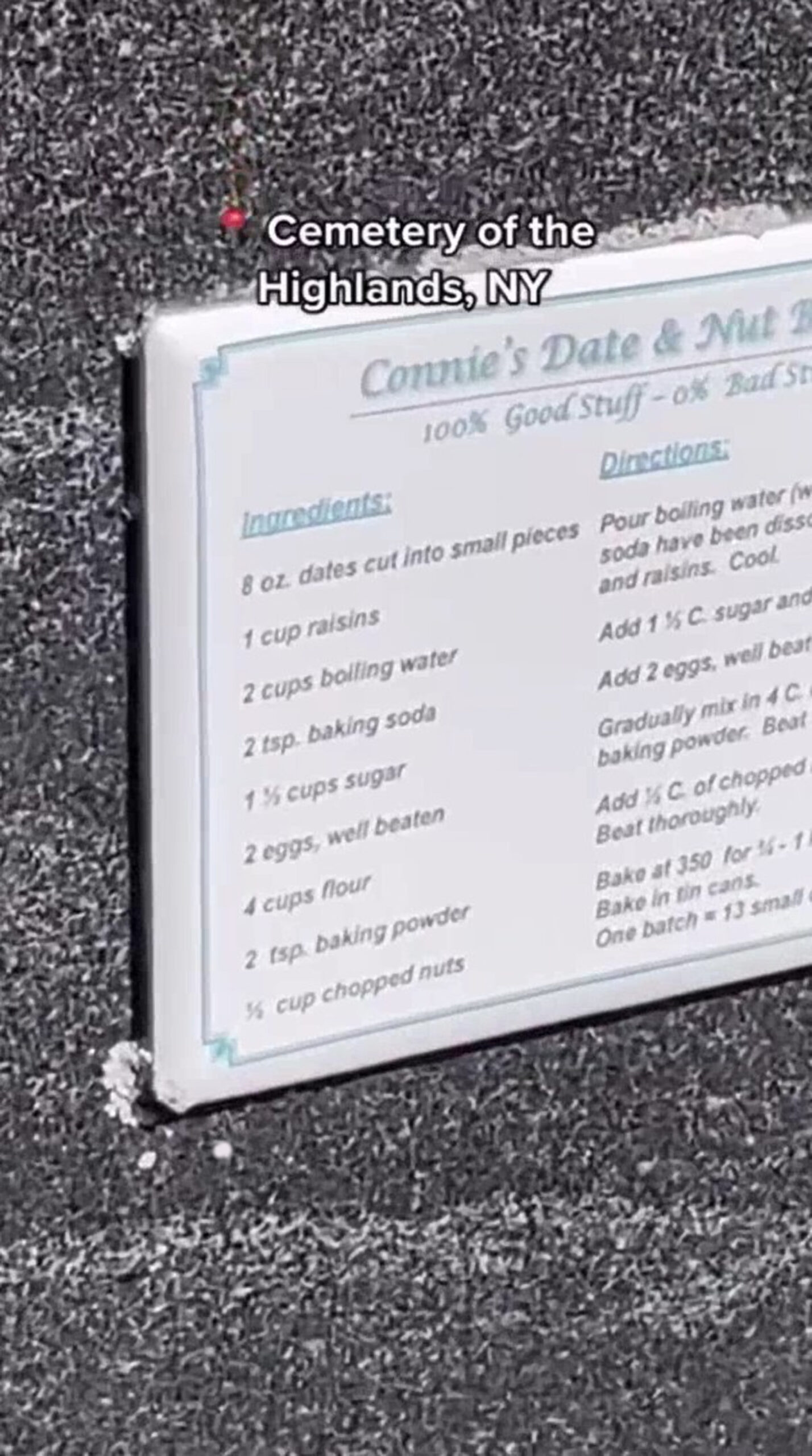 Picture of a recipe inscribed on tombstone at the Cemetery of Highlands, New York, undated footage. Ms. Grant's current favorite recipe is the spritz cookies, found on the grave of Naomi Miller Dawson. (@ghostlyarchive/Zenger)

Putting a favorite recipe on a person’s gravestone has become a trend and one woman has made it her mission to share them with the world.

Rosemary Grant, 32, uses the name @ghostlyarchive has a master’s degree in library science and an enthusiasm for cemeteries, and more specifically with recipes that people have put on tombstones that have made her a viral celebrity.

The woman, who comes from Washington DC, said it was more common than people realized, telling Zenger News: “I interned at the Congressional Cemetery in Washington DC, and was working in their archives when I first heard about them.

“I was in graduate school for archiving and also in a class about algorithms, and we had to start a social media account on something.

“I decided to make my TikTok about the internship and came across the gravestone recipes on Atlas Obscura.

“Since I’d started learning to cook during the pandemic, I decided to try cooking through these recipes and post about it.

“I thought it would be just one or two, but then I keep learning about more of them, and it grew from there.”

She added that her favorite was a recipe for “spritz cookies” based on instructions found on the gravestone of Naomi Miller Dawson in Brooklyn’s Green-Wood Cemetery.

She said: “They are on this beautiful grave in Brooklyn NY and a lot of fun to make. I got a cookie press to make the shapes and love how buttery they are.

“Luckily it’s not my job just an interest, and for the most part I get comments about either recipes or dishes people would put on their own graves.

“I also get a lot of comments about how others would make these recipes. Since there’s only so much space on a grave not all of them have instructions, so I had to guess.

“Then people in the comments would give helpful tips, which has been great for remaking the recipes.

“For instance, when I made the spritz cookies I didn’t know I was supposed to use a cookie press, so after TikTok commenters said I should use one I got a press and it’s been great!

“If anyone has seen grave recipes I’d love to know about them! There are so many cemeteries in the world I feel like the only way I’ll find more is by crowdsourcing people who go on walks in cemeteries. Let me know if you see one!

“The immortalization of recipes through epitaphs is actually more widespread than it seems. The practice exists in countries around the world, and in recent years these recipes have had a knack for going viral on social media.”