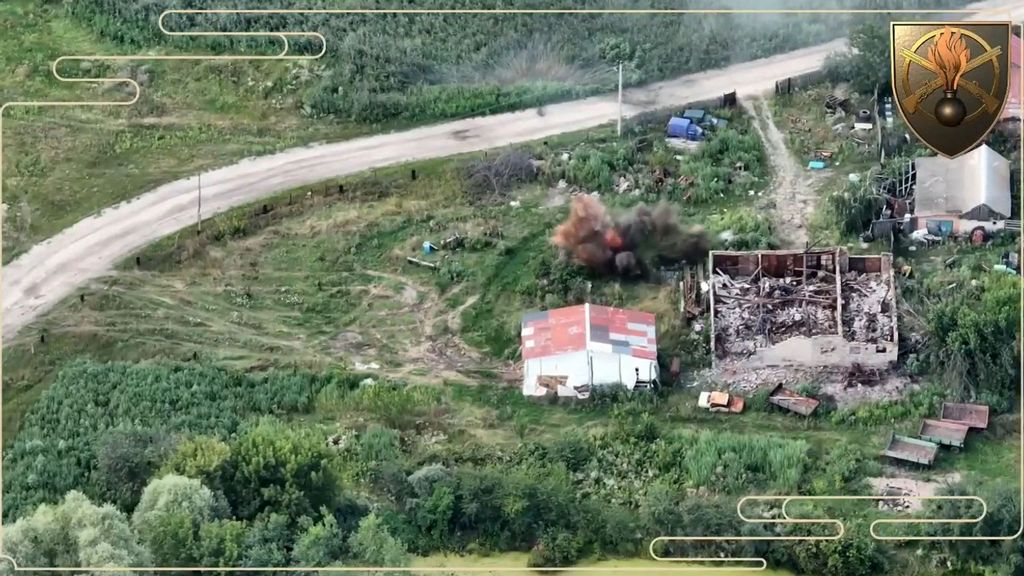 Picture shows explosion on the battlefield in Ukraine in undated footage. According to Ukraine military authorities, a Russian Motolyga was destroyed during the attack from the 22nd Separate Motorized Infantry Battalion. (@22ompb/Zenger)

This footage shows a Ukrainian T-64BM tank blowing a Russian anti-aircraft cannon to smithereens with a well-aimed shot.

The images show the Russian anti-aircraft cannon having been detected by a Ukrainian drone before the footage shows the Ukrainian T-64BM tank hiding among some trees.

It fires a well-aimed shot and obliterates the Russian war machine. It then fires a second shot that destroys a nearby building.

The ruined building immediately catches fire, with drone images then showing that there was a Russian armored vehicle hidden inside the building. A white ‘Z’ can be seen on the destroyed vehicle.

The footage was obtained from the 22nd Motorized Infantry Battalion, also known as the Kharkiv Battalion, of the Ukrainian Ground Forces, on Friday, August 19, along with a statement saying: “The weapon – no matter how cool it is – is controlled by brave Ukrainian soldiers who have been defending the Ukrainian land from the Russian occupation forces for the 177th day of the war.

“During reconnaissance in the area of &ZeroWidthSpace;&ZeroWidthSpace;responsibility of the 22nd Separate Motorized Infantry Battalion, our soldiers discovered enemy armored vehicles.

“The servicemen nicely demonstrated how they hit the ZU-23-2 from a T-64BM tank, which the invaders thought was securely hidden.

“We destroy the Russian invaders along with their armored vehicles. The enemy will be destroyed, and the Ukrainian land will be completely cleansed of enemy invaders.”

The T-64BM ‘Bulat’ is a Ukrainian tank that has been produced in the country since 2005. It is a modified version of the Soviet T-64.

The ZU-23-2 is a Soviet-era anti-aircraft autocannon that can be mounted on armored vehicles, as seen in the footage.

Zenger News contacted the 22nd Motorized Infantry Battalion for further comment, as well as the Russian Ministry of Defense, but had not received a reply at the time of writing.