“The Naval Forces of the Armed Forces of Ukraine continue to detect and neutralize drifting Russian mines in the Black Sea.”
By Joseph Golder August 23, 2022
Facebook
Twitter
Linkedin
Email 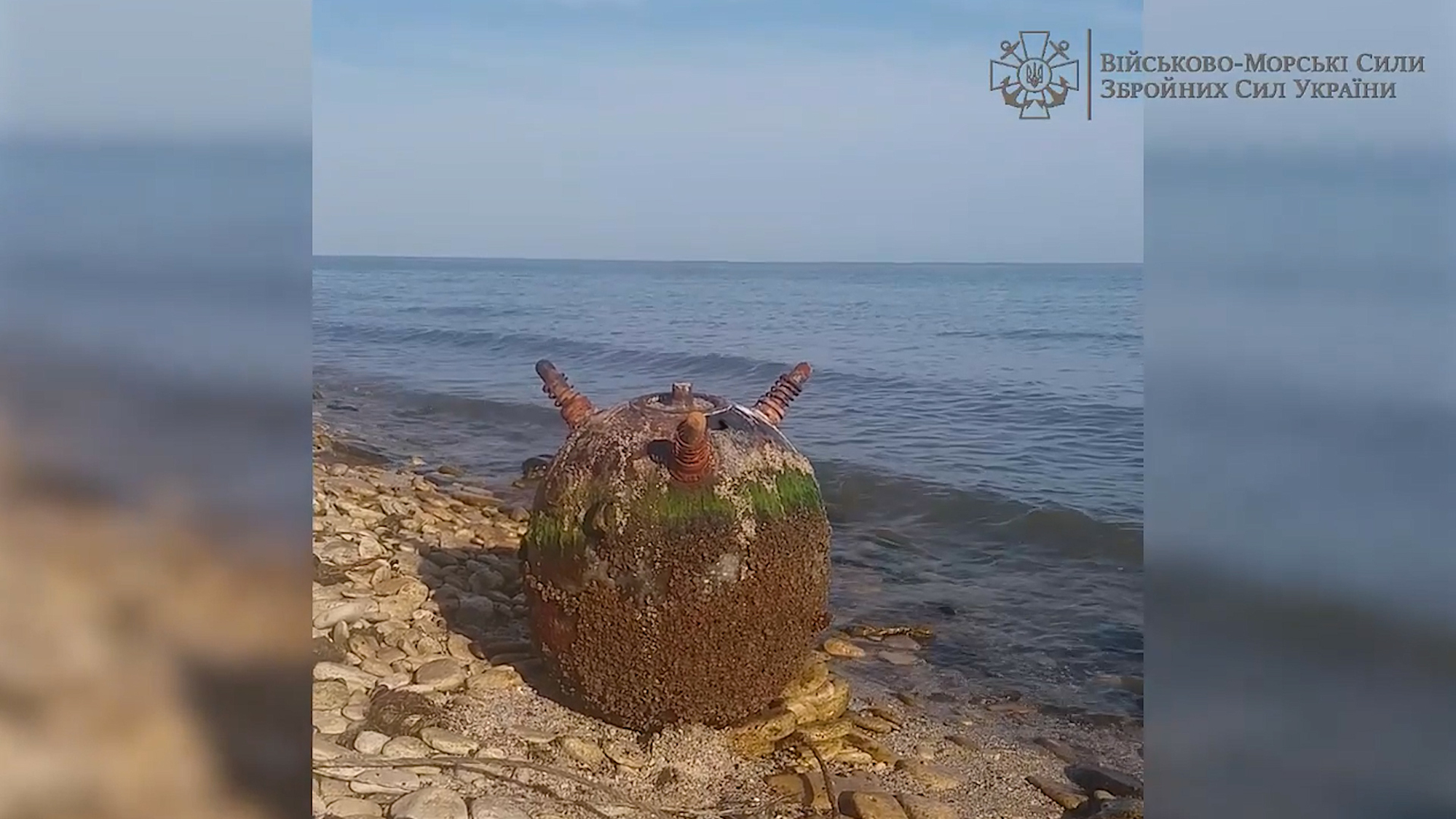 An anti-ship mine stands on the sea shore of Odesa, Ukraine, Sunday, Aug. 21, 2022. The explosive projectile was successfully destroyed by a special unit of the Navy of the Armed Forces of Ukraine. (@navy.mil.gov.ua/Zenger).

These images show the Ukrainian Navy blowing up two Russian anti-ship mines that drifted ashore near Odesa, the Ukrainian port city on the Black Sea.

The first piece of footage, showing one of the two mines on the shore before it is safely detonated, was obtained from the Ukrainian Navy on Sunday, August 21. An official statement said: “The Naval Forces of the Armed Forces of Ukraine continue to detect and neutralize drifting Russian mines in the Black Sea.

“For the second time in a day, a drifting anti-ship mine was discovered in Odesa by the defense forces of Ukraine.

“The explosive projectile was successfully defused by a special unit of the Navy of the Armed Forces of Ukraine.

“The Naval Forces of the Armed Forces of Ukraine continue to protect our country from the sea.”

The second piece of footage reportedly shows another drifting mine found earlier that day exploding as it is safely detonated on the shore. The Ukrainian Navy said: “Another drifting sea mine was discovered by the defense forces of Ukraine in Odesa.

“The dangerous find was promptly liquidated by a special unit of the Naval Forces of the Armed Forces of Ukraine.”

The mines were found and detonated on Sunday, August 21. The Governor of the Odesa region, Maksym Marchenko, 39, said: “Today, during the day our demolition teams destroyed two enemy drifting mines that washed ashore.

“I remind you about the ban on swimming and visiting the beaches, your life and health are in your hands. Glory to Ukraine!”

Marchenko is the former commander of the 28th Mechanized Brigade and the Aidar Battalion of the Ukrainian Ground Forces. He has been the governor of Odesa since March 1 of this year.

Zenger News contacted the Ukrainian Navy, which confirmed the authenticity of the footage and the accuracy of the information.

Zenger News also contacted the Russian Ministry of Defense for a comment but had not received a reply at the time of writing.